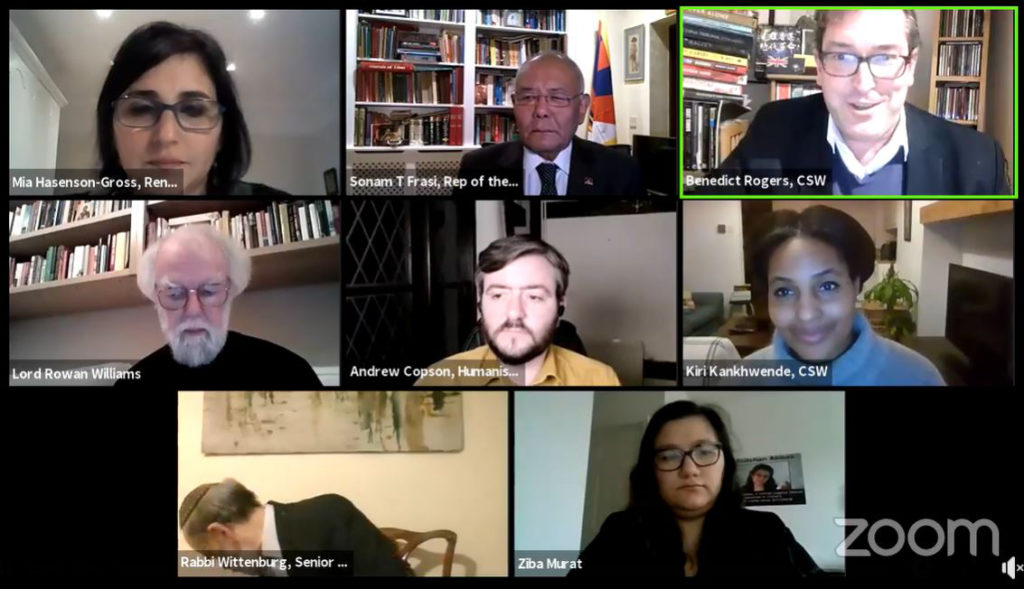 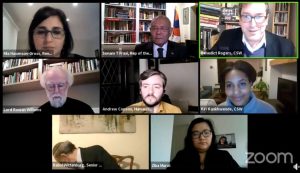 “All of these things echo from our past, and it would be a breach of the meaning of the history to say that we don’t want to act, that we’re not prepared to learn from it,” Wittenberg said during the conference. “This touches us deeply from the core of our history.”

Wittenberg voiced solidarity with the Uyghurs, represented at the conference by Uyghur American Ziba Murat. Murat’s mother, retired Uyghur doctor Gulshan Abbas, is serving 20 years in prison, according to Christian Solidarity Worldwide and others, because of her family’s activism in the U.S. on behalf of fellow Uyghurs. Abbas is the sister of Uyghur American human rights advocate Rushan Abbas.

“If it means anything, it means solidarity with you, Ziba, and with your people,” Wittenberg said of the Holocaust and lingering persecution.

Christian Solidarity Worldwide could provide no statistics on the number of Uyghurs China has murdered, but said it is “aware that a number of people do not know where their family members are or if they are still alive.” As many as 3 million are held at concentration or reeducation camps. China is attacking Uyghur identity, culture and religion, breaking up families, and leaving children and the elderly alone and vulnerable, the organization said.

“Individuals sent to the so-called reeducation camps do not have access to legal counsel and there is no mechanism for appeal,” Christian Solidarity Worldwide spokesperson Kiri Kankhwende told Baptist Press. “Their families are typically not told where they are being held, or when they will be released. In addition to the camps, an unknown number of Uyghurs, including many professionals and religious leaders, face extremely harsh prison sentences for so-called terrorism offences.”

Event organizers and participants encouraged citizens globally to advocate for the freedom and humane treatment of Uyghurs by contacting national leaders and ambassadors. In the U.S., both the State Department and the U.S. Commission on International Religious Freedom have highlighted the persecution of Uyghurs. U.S. Customs and Border Protection has restricted entry into the U.S. of any cotton and tomato products produced by the forced labor of Uyghurs in the Xinjiang Uyghur Autonomous Region.

Murat said the horror of the Holocaust must inform the world’s response to the treatment of Uyghurs.

“I’m asking as a daughter, let me hug my mother again. Let her see her grandchildren grow up,” Murat said. “I’m asking for millions of others who have no such opportunity to speak on this panel, and those suffering silently, or dead. ‘Never again’ should mean something,” she said, referencing the rallying cry of Jewish people and advocacy groups. “Every Uyghur in the diaspora is affected by this.”

Conference participant and former Archbishop of Canterbury Rowan Williams pointed to hope that lies in the advocacy of society despite theological differences and in the sure hope of Christ.

“Our capacity, our willingness to tell the story that some people want to silence, our capacity to stand alongside people that others want to be forgotten, that is part of where hope begins,” Williams said. “The very fact that we can speak together, despite our deep differences in all sorts of ways in our approach to reality, that sure is itself a sign of hope. As a Christian believer I also hold, not simply that there is simply some settlement in the future, but there is here and now, an energy that makes toward justice, that gives us some resource and some vision in the direction of justice.”

The event was not intended to downplay the atrocities of the Holocaust.

Mia Hasenson-Gross, executive director of René Cassin Foundation, said in remarks to the media that the difference between the Holocaust and “now is that there is still time to act. Jews have the moral authority and a moral duty to speak out now. Never again should civil society, businesses and decision-makers be silent as in the 1930s.”

The foundation, named for the French-Jewish judge who co-drafted the United Nation’s Universal Declaration of Human Rights adopted in 1948, describes itself as “a charity working to promote and protect universal human rights, drawing on Jewish experiences and values.”