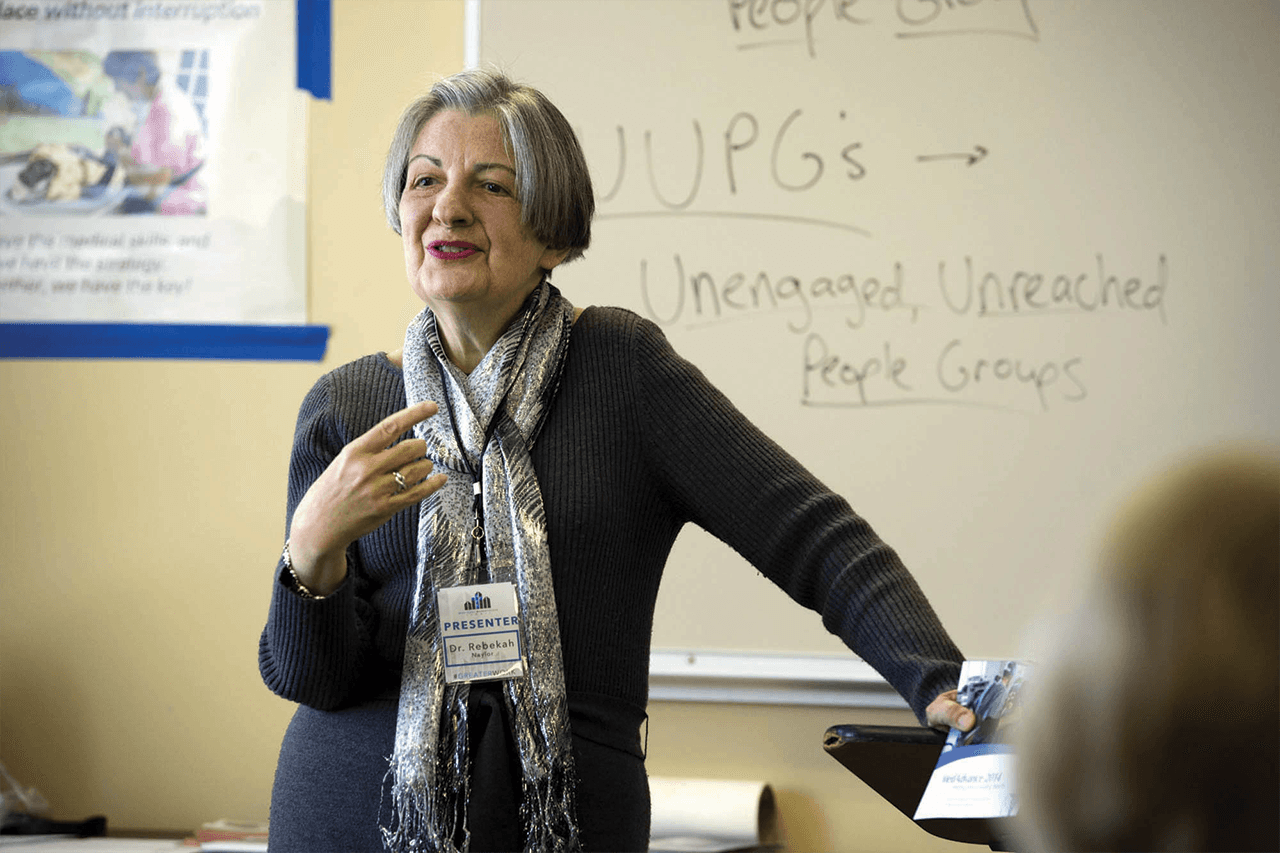 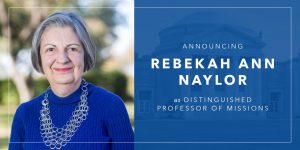 FORT WORTH, Texas—Rebekah Ann Naylor, a longtime medical missionary to India, has been appointed distinguished professor of missions in the Roy J. Fish School of Evangelism and Missions at Southwestern Seminary, the school’s administration announced today. She is the first female ever to hold such a position at the seminary.

“The late Robert E. Naylor, our fifth president, began the tradition of pronouncing upon new students and faculty the worthy name of ‘Southwesterner,’ and in my estimation there are few individuals more worthy to wear this distinctive appellation than his own daughter, Dr. Rebekah Ann Naylor,” said President Adam W. Greenway. “Through her decades of service with our International Mission Board (IMB) in medical missions, she has made tremendous contributions to the advancement of God’s Kingdom. It is, therefore, more than fitting—and long past due—that Dr. Naylor receive the honor of being appointed distinguished professor of missions, the first female to have ever been so recognized by our institution. Our students are blessed beyond measure to have the opportunity to study with her, a Southwesterner of first rank.”

Naylor joined six other administrative staff of the seminary to be appointed to the faculty.

Naylor made her profession of faith in Christ at just 5 years old, and eight years later accepted God’s call to become a medical missionary. After graduating from Baylor University with her B.A. degree in chemistry in 1964, she then completed her Doctor of Medicine degree at Vanderbilt University School of Medicine in Nashville, Tenn., in 1968. Her surgical training was completed 1973, after which she was certified by the American Board of Surgery and became a fellow of the American College of Surgeons.

In 1973, Naylor was appointed to the Foreign Mission Board (now International Mission Board). Following a 13-week orientation that prepared her for the mission field and a semester of studies at Southwestern Seminary, Naylor was deployed to Bangalore, India, as a general surgeon, evangelist, and church planter.

Naylor served at Bangalore Baptist Hospital (BBH) from 1974-2002, during which time the hospital experienced significant growth during this time. While Naylor’s initial appointment was as a clinical surgeon, she eventually assumed the positions of chief of medical staff, administrator, and medical superintendent. Under her supervision, BBH expanded patient care services and increased its capacity from 80 to 160 beds.

Naylor also supervised the construction in Bangalore of the Rebekah Ann Naylor School of Nursing in 1996. She later became its professor of anatomy and physiology and saw the first class graduate in August 1999.

Besides serving as a missionary surgeon and professor, Naylor also worked as a strategy coordinator and church planter for the International Mission Board in the state of Karnataka, India, from 1999 to 2009. During this time, she worked with the medical ministry and Indian pastors to help plant 900 churches in the state.

Upon her return to the United States, Naylor joined the faculty of the University of Texas Southwestern Medical School in Dallas and taught in the surgery department. She was promoted to associate clinical professor of surgery in 2007 and served in that capacity until her retirement in 2010. She then began serving as a global healthcare consultant for Baptist Global Response, mobilizing and training healthcare personnel to meet needs around the world. She also helped found Mercy Clinic, a free medical clinic for the uninsured, low-income population of southern Fort Worth, and has previously taught at Southwestern Seminary as an adjunct professor of missions.

Naylor became Southwestern Seminary’s permanent missionary-in-residence during Greenway’s administration, and now, as the first-ever female distinguished professor at Southwestern Seminary, “she will continue to impart her knowledge and years of experience to the next generation of God-called men and women, who can continue her legacy of reaching the nations for Christ,” Greenway said.

In commending her appointment, IMB President Paul Chitwood stated, “At the International Mission Board, Rebekah Naylor’s name is synonymous with medical missions. Not only is Dr. Naylor the leading voice in IMB’s current healthcare strategy, her advocacy is one of the primary reasons that the IMB has more medical professionals serving overseas today that at any time in our history.”

He added, “I look forward to seeing how God will use her in the role of distinguished professor of missions in the Roy J. Fish School of Evangelism and Missions at Southwestern Seminary to call out the called for the sake of every nation, all tribes, peoples, and languages. There is simply no better choice for this role.”

John D. Massey, dean of the Fish School, said he “could not be more excited” that Naylor has been appointed to the faculty, explaining that she “brings a wealth of missions experience from her 40-plus years as an IMB missionary in India and currently serving on special assignment with the IMB in the area of healthcare strategies and church planting.”

“In her lifetime,” Massey continued, “she has created an unmatched legacy of service to the Lord through reaching the lost through serving as a medical doctor in India. In a real sense, Dr. Naylor is coming home. She lived on our seminary’s campus as the daughter of our fifth president, Dr. Robert Naylor, until she left for college. Welcome home to the Dome, Dr. Naylor!”