Randy Adams to be nominated for SBC president 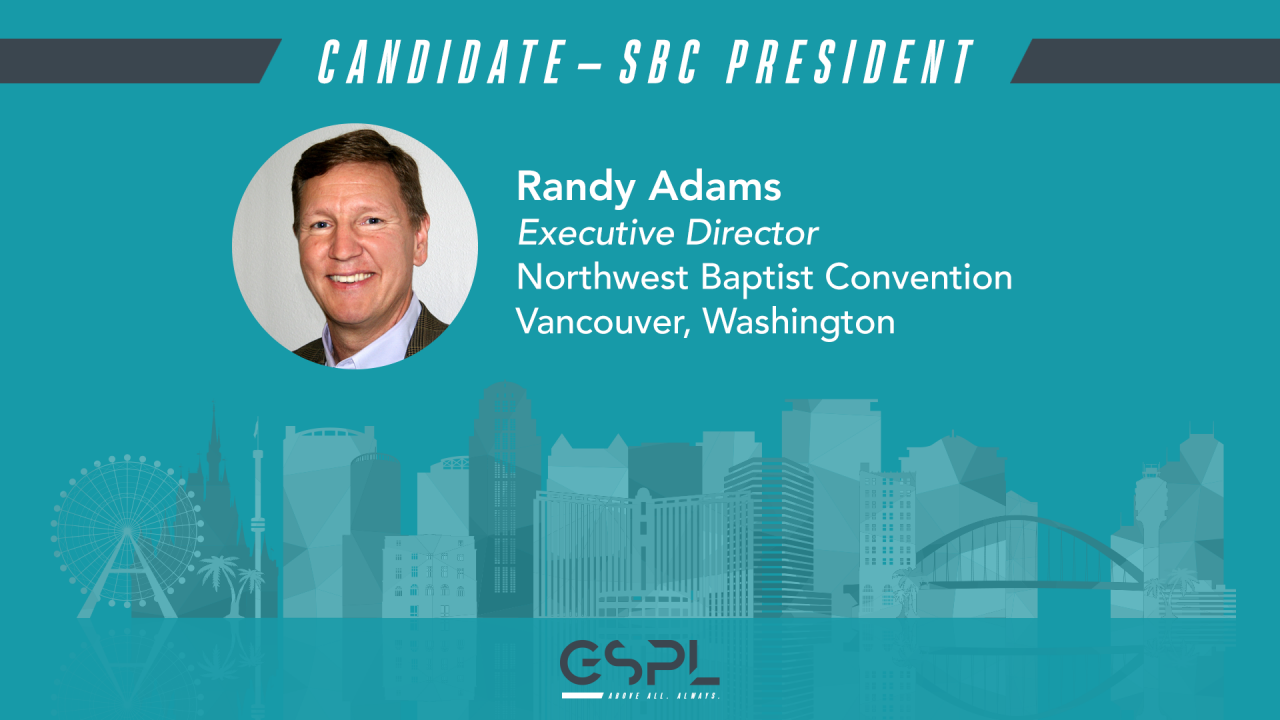 Adams’ intended nomination will be brought to messengers at the SBC annual meeting June 9-10 in Orlando, Fla.

Adams said that if elected, he would aim to focus on the SBC’s Great Commission efforts, rebuilding trust among the Convention’s churches, entities and other organizations, reported the Northwest Baptist Witness.

In an announcement on Adams’ personal website, he said he believes the SBC needs a directional shift.

“I am allowing my name to be entered into nomination for the presidency of the SBC because I believe that we need a clear change in direction in order to fulfill our God-given mission and reverse our present course of decline in every key measurement of Great Commission advance,” Adams said in the announcement.

“While Southern Baptists retain considerable ability to impact the world for Christ, we are currently experiencing our greatest challenge. After waging a decades-long battle for the Bible, we are in danger of losing the war we were founded to fight, that of advancing the Great Commission by making disciples and rescuing the captives of the evil one.

“If we do not honestly confront issues others will do so, including those who do not love the SBC like we do. Christians must be able to engage in honest discourse, speaking the truth in love.”

Adams said in his announcement that although he believes the SBC is in the midst of great challenge, it is also a time of immense opportunity—a chance to recommit to the purpose of advancing the Great Commission.

The only other nominee for the SBC presidency thus far is R. Albert Mohler Jr., president of The Southern Baptist Theological Seminary in Louisville, Ky., who will be nominated by H.B. Charles, pastor of Shiloh Metropolitan Baptist Church in Jacksonville, Fla.

Blake Gideon, pastor of Edmond, First, and president of Oklahoma Baptists, is the intended nominator of Adams at the SBC annual meeting.

Gideon cited Adams’ goals for the SBC as reason for his nomination.

“His experience, integrity and the vision he has for the SBC is vital,” Gideon told Baptist Press. “We face some increasing challenges from our culture and increasing decline and division in the SBC. Randy is the kind of guy who will lead us according to God’s Word, and unite us behind the Great Commission.”

Explaining why a collective group is making this nomination announcement, Gideon said “in order to demonstrate unity of Southern Baptists from across different demographics and ethnicities. (We) wanted to express a united effort of people who we believe really reflect the SBC.”

The group, like Gideon, also cited Adams’ “experience, integrity and vision” as their reasoning behind the nomination, reported the Northwest Baptist Witness.

Adams is a member of Go Church, a church plant in Ridgefield, Wash. The plant reported 34 members and an average of 100 weekly attendees on the 2019 SBC Annual Church Profile (ACP). Of total undesignated receipts of $233,660, the church gave $13,805, or 5.9 percent, through the Cooperative Program, according to the ACP.

“His proven leadership over the Northwest Baptist Convention proves his focus in advancing the Great Commission,” Gideon said. “It also demonstrates the value of cooperative work and supporting the Cooperative Program. Through my personal involvement with him, I know him to be a man who has historically strongly supported the Cooperative Program.”