Pure Flix is an impressive family-friendly replacement for Netflix, Disney

Not so long ago, retailers would advertise products as “new and improved” if they had tweaked the ingredients and wanted former customers to give the product another try. Minus a few historical blunders—1985’s “New Coke,” for example—it often worked.

That “new and improved” label comes to mind when discussing the “new” version of the streaming service Pure Flix, which was launched by top Christian media executives in 2015 as a faith-based type of Netflix before being purchased by Sony in 2020. 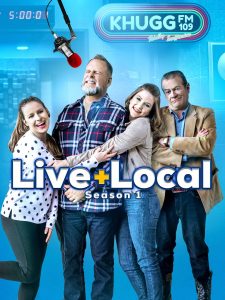 First, the library of titles has dramatically expanded. That’s because Sony’s Affirm Films is home to some of the most well-known faith-based movies in recent years, including those from the Kendrick Brothers (Lifemark, the latest Kendrick Brothers movie, made its home video debut on Pure Flix). Lee Strobel’s The Case for Heaven is on Pure Flix, and Cathy Lee Gifford’s The Way is coming soon.

Second, Pure Flix has launched an impressive list of original titles starring big-name talent. Legacy Peak, which tells the story of a family fighting for survival after their airplane makes an emergency landing, features Lucas Black of NCIS: New Orleans. Live + Local, a genuinely funny comedy series about a Christian radio station, stars Dave Coulier of Full House and Fuller House. Saved by Grace, a dramatic series about angels interceding in the daily lives of individuals, features Jennifer Taylor of Two and a Half Men. All total, Pure Flix is releasing 10 original movies and series in 2022, with 15 scheduled for 2023. 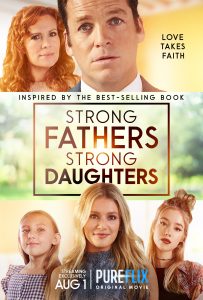 ‘Strong Fathers, Strong Daughters’ is considered one of the best family films of the year.

In plain language: There is far less cheese and far more quality. The Pure Flix original Strong Fathers, Strong Daughters is Hallmark-like—and one of the best family films of the year.

Third, Pure Flix is improving just as other streaming services are growing coarser. Sure, you can find family-centric titles on Netflix and the like, but it’s a lot like searching for healthy food options at McDonald’s. There just aren’t many choices. By comparison, Pure Flix offered 190 holiday-themed movies and shows for the 2022 Christmas season.

For children, there’s VeggieTales, Superbook and Hermie & Friends, among others.

New titles are introduced each month.

“There’s not a lot of services that” offer family-friendly content, Pure Flix CEO Michael Scott told me. “Pure Flix is that alternative.”

Scott encourages families to ask: What are we putting into our minds through our media choices?

The Wingfeather Saga (Angel.com)—A family (the “Igibys”) seeks safety from evil as they take a stand against a mysterious ruler, Gnag the Nameless. This excellent family-friendly animated series is based on the novels by Christian musician/author Andrew Peterson. It’s a groundbreaking series that is a cross between The Lord of the Rings and the world of Narnia. It also is crowdfunded. Visit Angel.com to discover viewing options.

I Heard the Bells (Theaters, Home Video)—One of the most famous men in 1800s America, Henry Wadsworth Longfellow, pens a famous Christmas carol following a life-altering tragedy. It is the first dramatic movie from Sight and Sound Films, which was launched by the popular company, Sight and Sound Theatres, which makes Broadway-style Bible-based musicals. This faith-based film is unrated and contains no coarse language or sexuality. Visit IHeardTheBellsMovie.com.

Good Night Oppy (Amazon Prime)—NASA sends a rover to Mars with an expected lifespan of 90 days but gets an incredible 15 years of work out of the hard-working machine. It’s a fascinating documentary that tells the story of Opportunity, which roamed the Mars surface from 2004 to 2018. Rated PG for some mild language (We hear d–n a few times).

Lyle, Lyle Crocodile (Home Video)—A singing crocodile befriends a middle school boy who is lonely and needs a friend. This live-action film is based on the 1965 children’s book of the same name by author Bernard Waber. It includes solid lessons about friendship and courage. Rated PG for mild peril and thematic elements. It also has three OMGs (Clearplay offers a filter).