As the Edna McMillan Oklahoma State Missions Offering (SMO) approaches, Oklahoma Baptists aren’t backing down when faced with challenges or uncharted territory. With money from the SMO, Oklahoma Baptists are equipped to do ministry that fills immediate needs in areas such as foster care or adoption.

Brian and Traci Shafer, members of El Reno, First have five biological children as well as five adopted children. “There was a moment for me when praying with my younger ones, ‘God look after those who are less fortunate, the widows and the orphans,’” Brian said. “And I think God struck me and said ‘You do it. Either do something or quit asking me to do it, because I’ll find somebody else to do it.’”

This was all the Shafers needed to hear, and in the next 13 months, their family grew by five. Their story inspired and challenged others in their church, including Pastor Charlie Blount and his wife, Renee. 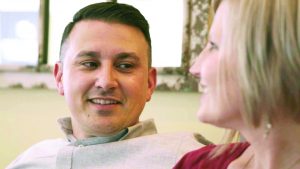 “God demands that we take care of the widows and orphans. The Book of James says that this is religion that is pure and undefiled. I think, as the church, we need to be meeting real needs,” Blount said.

Beginning the journey to foster care appeared to be a challenging quest for Blount and his family. Once they saw what the Shafer family had done, Blount said, “If this family of five could adopt five more children, then I couldn’t have the excuse of ‘I’m too busy’ or ‘That’s too hard.’”

The Blounts have now taken their 11th placement since they began fostering children in need.

However, the effort to fill the gap of the State of Oklahoma needing foster parents does not stop with the Blounts and Shafers at El Reno, First.

The entire church has embraced the vision of foster care. “We’ve had at least four families who have adopted through foster care, and we created a foster care response team,” Blount said.

These foster care response teams are made up of people who are ready to answer the call for help when one of the church members of El Reno, First receives a placement. “The team is going to show up and provide meals, diapers, clothing, whatever the family needs,” Blount said. 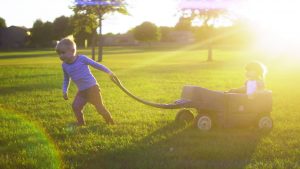 ‘We’re going to use this Edna McMillan State Missions Offering to help ministries like the one we see established at First Baptist El Reno,’ said Hance Dilbeck, executive director-treasurer of the BGCO.

“We’re going to use this Edna McMillan Oklahoma State Missions Offering to help ministries like the one we see established at First Baptist El Reno,” said Hance Dilbeck, executive director-treasurer of the Baptist General Convention of Oklahoma (BGCO). “This money goes to help ministries like Leflore Association as they have a retreat for foster families where they get continued education so their certification can be up to date. We want to see more and more of our churches and associations wading into foster care.”

The Shafers admit that their journey into foster care has not been without struggles at times.

“God has sent His Spirit to save us in those dark moments where we’re looking into each other’s eyes, with tears streaming down our faces, thinking ‘I don’t know what to do next,’” Brian said. “God provided the grace. They’re (the kids) helping me to rely on faith more than ever.”

Traci acknowledged that serving as a foster family might not be how the Lord calls a family to support foster care in Oklahoma. 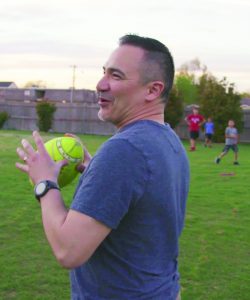 Brian Shafer tosses a football around with his children.

“Everyone isn’t called to foster or adopt, that’s true, some aren’t. But some are called to give. So whatever you are called to do, do that,” Traci said.

Amy Cordova, BGCO women’s missions and ministries specialist, shared how important this year’s SMO offering is in supporting ministries that are involved with foster families.

“Every time a child is separated from their biological family, it is a traumatic event in the life of a child,” Cordova said. “Through the Edna McMillan Oklahoma State Missions Offering, we have the opportunity to provide relief and care to hurting families by helping with reunification efforts and opening our homes as a safe place for children to grow and heal.”

The Edna McMillan Oklahoma State Missions Offering will take place in September. For more information about giving to SMO, to download resources and more, visit www.statemissionsok.org.