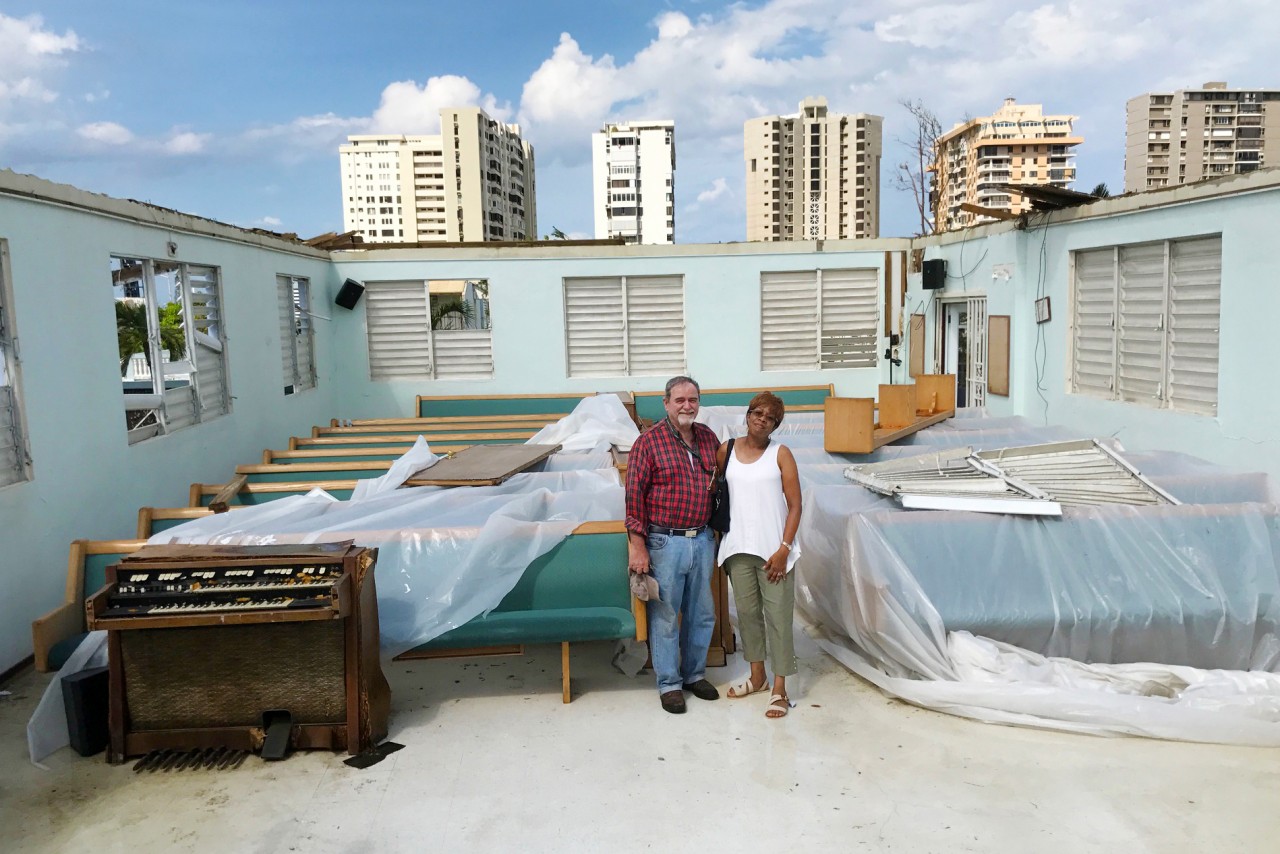 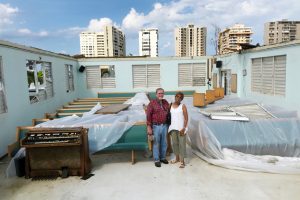 The roof of Green Island Baptist Church was completely blown off during Hurricane Maria’s sweeping destruction in Puerto Rico. Pastor George McKnight and his wife Debbie pause for a photo, with the San Juan skyline in the background, at the church which also was flooded. Southern Baptist Disaster Relief and the North American Mission Board’s Send Relief have been working to coordinate a response to the devastation in the island nation. (Photo: Sam Porter)

SAN JUAN, Puerto Rico (BP) — Three weeks after Hurricane Maria hit Puerto Rico, Sam Porter estimates that one-third of the island has yet to receive much care or help.

Porter, the North American Mission Board’s national director for disaster relief, has been in Puerto Rico since Sunday, Oct. 8.

He is working there with Jack Noble, a retired disaster relief director from the SBC of Virginia, and David Melber, NAMB’s president of Send Relief, to coordinate a plan to deliver help and hope to the people of Puerto Rico.

The situation in Puerto Rico has been so dire, the devastation so widespread, that SBDR will be doing much of its recovery work without the assistance of some traditional governmental and charity-based relief partners.

“The circumstance is so unusual that we have to take the full responsibility of this response on our own,” Melber said. “That means buying and shipping the food, renting warehouse space, sending the kitchen equipment and then providing the volunteers to do the cooking. We are forging our entire response by ourselves.”

Send Relief is working to establish relief ministry hubs in as many as 15 churches in Puerto Rico where SBDR volunteers will be able to provide hot meals and other needed services. NAMB and Send Relief have put together pastor kits, including generators, tools, food and other resources, that will go to local churches.

These kits will help those churches become centers for other forms of relief ministry throughout the community as SBDR and Send Relief volunteers step into the rough living situations in Puerto Rico.

In the first few weeks of October, the opportunities for serving have been limited to trained SBDR volunteers. Later in October, Send Relief expects to start sending untrained volunteers who have registered through sendrelief.net.

This week (Oct. 9-13), dozens of SBDR volunteers are on the ground, experiencing just how difficult life is in Puerto Rico while working to clear debris, chain-saw downed trees and clean mud out of flooded homes.

“Our volunteers are roughing it,” Porter said. “This is not your normal mission trip. Anyone who comes to Puerto Rico needs to be ready for extreme conditions. They will be sleeping on floors. They likely won’t be able to shower. They may not even have a flushable toilet.” 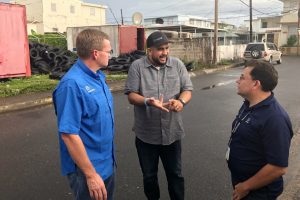 In a traditional disaster relief setting, volunteers typically have the ability to drive 20 or 30 minutes and find themselves out of the disaster zone. It’s not so in Puerto Rico currently.

“It’s as bad of conditions as I’ve seen in my nearly 20 years of disaster relief,” Porter said, “and I have worked in international disaster zones before. This is 120 miles long and 35 miles wide of destruction. I’ve never seen that before.”

“When you’re traveling at night and you don’t see lights hardly anywhere, it just puts the damage into perspective,” he said. “Imagine a society being without power for six months to a year, and you will realize that people cannot store or cook food, let alone open up their businesses.”

The damage to the island’s infrastructure has made it difficult for NAMB and Send Relief to deliver resources to those who need them most, but God has been opening doors. Whatever resources can possibly be purchased on the island will be bought in Puerto Rico in order to stimulate the local economy. Whatever cannot be purchased there will be shipped in by sea or by air.

Since the damage has been so severe, thousands of people are leaving the island, but many will be unable to do so. Resources, such as the pastor kits, should be arriving soon. Southern Baptists will then be able to establish the necessary infrastructure in order to conduct even more relief ministry for those who remain on the island.

One step of faith

As Porter traveled around the island, he encountered one NAMB church planting missionary who took a step of faith by feeding people from his church building.

“He started cooking with the food he had,” Porter recounted. “When the people in the neighborhood heard that, they started bringing what rice and beans they had. He was a pastor stepping out in faith, and God provided.”

“Send Relief provides the opportunity for every church member to get involved, whether in giving or in volunteering,” Porter said. “God has enough resources in the pockets of Southern Baptists across the country to provide relief to the people of Puerto Rico who are in extreme need.”

The expectations for these resources, however, extend beyond simply providing for physical needs.

“I’m sure that some of the people who were fed in that pastor’s church will be baptized in the coming weeks,” said Porter. “As Southern Baptists continue to put their resources into this relief effort, we will see people come to faith in Christ.”

The Baptist General Convention of Oklahoma’s Disaster Relief Director Don Williams is exploring through discussions with Porter how Oklahoma can assist with the recovery efforts in Puerto Rico while BGCO relief efforts in Texas continue.