Leaping from Lambeau to little league 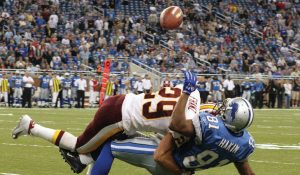 Todd Franz makes a pass breakup as a Washington Redskin

Franz and his wife Tisha are active members of Oklahoma City, Heritage. Their son Rawley, age 9, plays for the Patriots flag football team as part of the Oklahoma City, Quail Springs Upward league.

Van Greenwood, who serves as recreation minister at Quail Springs said, “Upward is a unique sports league for kids. Many leagues use parents as volunteers, but Upward gives Christian believers an opportunity to volunteer and share the Gospel with kids in a sports setting.”

Each week, Franz leads a practice for the boys’ team. It’s not all X’s and O’s the players practice. Part of the practice consists of memorizing Bible passages or talking about a lesson from God’s Word.

One of the unique features of Upward is encouragement the players receive after each game. Colored stickers are given that represent an attribute or quality that the coach notices the players 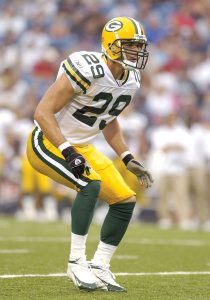 display during the game—effort, offense, defense, leadership, Christlikeness. Players also receive stickers for memorizing Scripture, and the sticker presentations are made with the parents present, allowing them to applaud their children’s accomplishments.

“I love the game of football, and I love the Lord,” said Franz. “My son has participated in Upward for multiple years, and I saw volunteering as an opportunity to share Christ’s love with the boys and their families.”

Upward attracts unchurched families and is a great evangelism opportunity that Christians can become involved in, according to Greenwood.

“Many people are not comfortable serving in a traditional church volunteer setting, such as Sunday School,” Greenwood said. “Upward allows people who love sports to serve in a church ministry.”

Franz is a graduate of the University of Tulsa, where he played college football. During his time in the NFL (2000-2005), Franz played for the Cleveland Browns, the New Orleans Saints, the Washington Redskins and the Green Bay Packers.

During one recent practice, Franz recounted one of his playing day moments to the boys.

“On Monday Night Football, I caught an interception and took it into the end zone, where I got to do the ‘Lambeau Leap’ (into the stands at Green Bay’s Lambeau Field). John Madden was in the sound booth calling the play,” recalls Franz.

After recounting this NFL moment to the boys on the team, Franz said, “Football is all about practice and being in the right place at the right time. God’s Word tells us what to do. He has a great purpose for your life in Jesus Christ.”

Todd and Tisha first met at Falls Creek and, years later, were married. In addition to Rawley, they have a daughter, Sawyer, and also have served as foster parents. Franz, whose day job is in real estate, has been active in Fellowship of Christian Athletes, through which he has been able to share his testimony at correctional facilities.

From church activities to Upward Sports, the Franz family seek to honor God in all they do.

“Playing in the NFL was great,” said Franz. “But being a redeemed child of God is the greatest thing in life.”