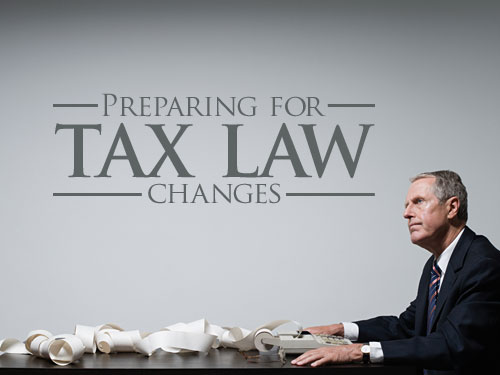 Whoever coined the expression “kicking the can down the road” may not have considered that the “can” may do an about face and return the favor.

Congress has procrastinated as long as possible regarding the Bush-era tax cuts. Because of a “sunset” provision in the Tax Relief, Unemployment Insurance Reauthorization and Job Creation Act (TRA 2010), this legislation expires at the end of 2012, and taxes will default back to the 2001/2002 levels.

Unless Congress acts between the election and the end of the year, numerous income, capital gain, estate and gift tax consequences become our new reality on Jan. 1. Can a lame duck Congress come together and fix these issues before they have a significant impact on every taxpayer? Right now the “can” appears to have the upper hand.

The accompanying table compares the tax law changes that will have the biggest impact on estate and charitable giving.

The scheduled income tax changes will have the most significant and immediate impact on the family budget because it will reduce all taxpayers’ take-home pay. The capital gain tax changes have prompted many to make selling decisions regarding their investments portfolios.  Bernie Kent, Personal Finance Contributor, wrote in Forbes Magazine:

“The likelihood for significant increases in the long-term capital gains rates would suggest that you recognize your long-term gains in 2012 and hold off on selling your losers until 2013.”

Charitable planned giving can also be a great option to consider when faced with higher capital gain tax rates. You can create a charitable arrangement, called a charitable remainder trust, which allows you to avoid capital gains and appreciated assets like stocks, mutual funds or even real estate while retaining a lifetime income and making a gift to your favorite Baptist ministries.

The lower exemption levels on the 2013 gift and estate taxes could also have an impact on your estate plan. The 2012 $5.12 million level protects the vast majority of Americans. However, absent Congressional action before the end of the year, the new $1 million level in 2013 will impact a larger number of estates, and as a result, changes will need to be made to their estate plans to shelter their assets from estate taxes. The exemption amount, potentially, $1 million, can be doubled to $2 million of protection, but it requires you to revisit the provisions of your estate plan.

Between now and the end of the year, all eyes will be watching these tax law issues and Congressional actions. When the “can” reaches the end of the road (2012), will it kick us back by letting these new taxation levels take effect, or will we finally deal with our nation’s revenue system of laws? Either way, protect your family by reviewing your estate plan and visiting with your tax professional to determine the best course of action.

If you would like to know more about establishing a charitable giving arrangement or would like to review your current estate plan, contact the Foundation at 800/949-9988.

Are you considering a year-end gift to a Southern Baptist ministry through The Baptist Foundation of Oklahoma? The Foundation’s offices will be open after Christmas, Dec. 26-28, and Mon., Dec. 31. Staff will be available to meet with you to help finalize your year-end giving transactions. Although the Foundation offices will be open, the Baptist Building will be closed, so please call to make an appointment.