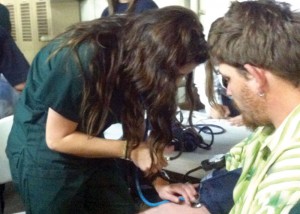 SHAWNEE—Seniors in Oklahoma Baptist University’s College of Nursing carried out service projects in recent weeks to benefit members of the Shawnee area through health and hygiene education and screenings, as well as provide disaster preparedness for the OBU community.

Through the Community Nursing course, OBU nursing majors are assigned the task to develop a community project that would benefit the community in some way.

“Our senior clinical group was inspired to do this project because of the major need in the Shawnee community,” said Moore, a senior nursing major from Mansfield, Texas. “The Shawnee Rescue Mission was the perfect place to develop a community outreach program and help the homeless and less fortunate population. We hoped that by collecting these materials, the homeless population would be able to stay warm during cold weather and have an opportunity to receive multiple hygiene materials that could benefit their health.”

“As senior nursing majors, the project was very beneficial to our education,” Moore said. “We were able to become aware of the major health concerns out in the community instead of just in the hospital setting.”

Another senior nursing group, consisting of Autumn Simms, Barrett Cook, Olumayowa Akinyode and Tolani Olabode, contributed to the OBU community by setting up a disaster preparedness booth located in OBU’s Geiger Center. The booth contained information about what to do prior to, during and after emergency situations such as tornados, earthquakes and fires. Group members passed out brochures with tips for disaster preparedness and a map of the locations of storm shelters on the OBU campus.

Visitors to the booth entered a raffle for a chance to win a “Go Bag,” which included essential items for the 72 hours following a disaster. Additionally, a computer set up at the booth gave students a chance to sign up for OBU’s text and email alert system. The system warns students, faculty and staff of incoming severe weather and storm warnings.

For more information about the Shawnee Rescue Mission, visit www.shawneerescuemission.com,  or call 405/878-8700.