Sam Porter, who has been serving as director of Oklahoma Baptist Disaster Relief (DR) with the Baptist General Convention of 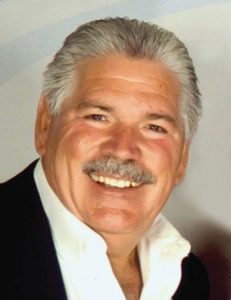 Porter has been a prominent DR leader in Oklahoma and across the nation. He was one of the first to respond after the 9/11 attacks in New York City, making numerous trips for two years and serving as a chaplain in the morgue at Ground Zero. From responding to the devastating Moore tornadoes of 1999 and 2013 to today, Porter has led Oklahoma Baptist DR volunteers to serve fellow Oklahomans in need.

BGCO Executive Director-Treasurer Anthony L. Jordan said, “Sam’s retirement is a great loss to me personally and Oklahoma Baptists. He and I have been friends and colleague for 30 years.   Sam has led our Disaster Relief and partnership missions ministries with passion, excellence, and effectiveness.  He is without equal as a leader of Disaster Relief ministries.  He is respected by all.  While I grieve his retirement I rejoice that he will continue to serve Southern Baptists through NAMB.  He has the respect and skills to renew the partnership between state conventions who recruit, train, and provide equipment and the strategic roll of NAMB in coordination.  I pray the Lord’s blessing on he and Sheryl in this new adventure in service of our Savior and his people called Baptists.”

Porter has led more than 100 volunteer mission projects and more than 40 international relief missions. He had headed recovery efforts for a year in Haiti, following 34 volunteer teams from Oklahoma in the wake of the devastating earthquake Jan. 12, 2010.

Porter plans to retire from the BGCO Aug. 15 and begin his role with NAMB in mid-September. 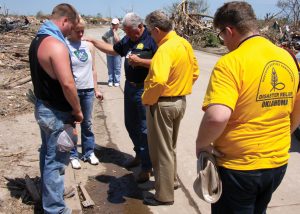 Porter praying with victims of tornado damage in May 2013.

Regarding Porter’s new post, David Melber, NAMB vice president of Send Relief said, “We’ve been praying and looking for Mickey’s replacement for about 18 months. Sam has been in the disaster relief world for a long time, working around the nation and throughout Oklahoma. He’s proven to be a great leader. I’m excited to see how he’s going to continue unifying our state disaster relief leaders during crisis and how he will bring a new direction for disaster relief that’s going to further build its future.”

“I am really thrilled to get to continue in the ministry I’ve already been doing 19 ½ years,” Porter said. “The SBC-DR network of state directors is a fellowship of incredible men who help believers learn how to put themselves in the ‘mission offering plate.’ My prayer is that we can see every state convention have a strong Disaster Relief team to impact their part of the USA for the Lord by serving when individual’s lives are torn apart by disasters of various types.

“The first things will be to seek to strengthen the DR teams in the state conventions that have declining numbers,” said Porter. “We want to see every one of the 42 state conventions reach out to include collegiate students and many more millennials. This generation are doers and desire to be in ‘hands-on ministry.’ They are perfect to be DR volunteers. We will seek to have more join their local state teams to serve across the nation.”

He has served on the board of trustees at Golden Gate (now Gateway) Seminary and was chairman of the board for two years. Porter was a trustee for Oklahoma Baptist Homes for Children and vice president of the Oklahoma Pastors’ Conference. He also has served as a men’s ministries specialist and pastored for 20 years at several churches.

“We would never have imagined a year ago that someone like Sam would want to take on this role,” said Melber. “But God has been clarifying who we needed, and it was confirmed in Sam and his wife, Sheryl, too. Sam will bring new ways to grow a volunteer network in disaster relief, and we’re so thankful for God’s constant provision and how He works through all circumstances.”

Porter has an undergraduate degree from Baylor University where he was defensive end on the Baylor football team. He also holds a Master of Divinity degree from Southwestern Seminary. He and his wife, Sheryl, have two sons, Aaron (married to Chanda) and Josh (married to Rachel), and five grandchildren, Reece, Doak, Zeke, Chi and Jet.

View all posts by NAMB Staff