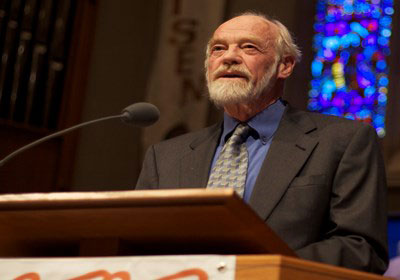 An update to Eugene Peterson’s statement can be found here:  http://www.christianitytoday.com/news/2017/july/eugene-peterson-actually-does-not-support-gay-marriage.html

NASHVILLE (BP) — Bestselling Christian author Eugene Peterson, known for “The Message” paraphrase of Scripture, reportedly said in an interview with Religion News Service he does not believe homosexuality is sinful and that he would perform a same-sex wedding if asked.

LifeWay Christian Resources told Baptist Press it will stop selling all works by Peterson if he confirms he holds the views reported by RNS.

“LifeWay only carries resources in our stores by authors who hold to the biblical view of marriage,” LifeWay told BP in a statement. “We are attempting to confirm with Eugene Peterson or his representatives that his recent interview on same-sex marriage accurately reflects his views. If he confirms he does not hold to a biblical view of marriage, LifeWay will no longer sell any resources by him, including The Message.”

NavPress, which publishes The Message, did not respond by BP’s publication deadline to a request for comment.

Peterson, a Presbyterian Church (U.S.A.) minister, announced his views on homosexuality in an interview with RNS’s Jonathan Merritt published today (July 12). Peterson is the author of more than 30 books and a former professor at Regent College in Canada.

“I wouldn’t have said this 20 years ago,” said Peterson, 84, “but now I know a lot of people who are gay and lesbian and they seem to have as good a spiritual life as I do. I think that kind of debate about lesbians and gays might be over. People who disapprove of it, they’ll probably just go to another church.

“So we’re in a transition and I think it’s a transition for the best, for the good. I don’t think it’s something that you can parade, but it’s not a right or wrong thing as far as I’m concerned,” Peterson said.

In response to a question from Merritt, Peterson said he would perform a same-sex wedding if asked to do so.

Peterson also told of pastoring a congregation that was willing to consider hiring an open homosexual as minister of music.

“We didn’t have any gay people in the whole congregation,” Peterson said. “Well, some of them weren’t openly gay. But I was so pleased with the congregation. Nobody made any question about [the applicant’s sexuality]. And he was a really good musician.”

Peterson did not mention the name of the church. He served from 1962-91 as pastor of Christ Our King Presbyterian Church in Bel Air, Md. The congregation’s PCUSA denomination endorsed same-sex marriage in 2014.

In congregations Peterson served as an associate pastor, he said, “there were several women who were lesbians. They didn’t make a big deal about it. I’d go and visit them and it never came up for them. They just assumed that they were as Christian as everybody else in the church.”

Merritt noted that prior to the interview with Peterson, “I couldn’t find his position on [homosexuality] either online or in print” and that The Message “doesn’t use the word ‘homosexual’ and ‘homosexuality’ in key texts” on the subject. Merritt added “those words never appear in any English translation of the Bible until 1946.”

Southern Baptists were among those who issued public responses to Peterson’s announcement through social media:

— Denny Burk, president of the Council on Biblical Manhood and Womanhood and professor of biblical studies at Boyce College, wrote in a blog post, “To say that Peterson’s justification for same-sex relationships is really thin would be an understatement. His is not an argument based on Scripture. Rather, it’s an argument based on sentiment. He says that he’s known some nice gay people, therefore he now discards the moral consensus of the entire 2,000-year history of the Christian church. This is not pastoral wisdom. It’s folly of the first order.”

— Nathan Finn, dean of Union University’s School of Theology and Missions, tweeted, “I’ve been so blessed by the writings of Eugene Peterson over the years. His revisionist sexuality is so deeply disappointing.”

— Andrew Walker, ERLC director of policy studies, tweeted, “Truly, how sad that a creative voice like Eugene Peterson would forsake the Scriptures and the tradition that he so eloquently wrote of.”

— Owen Strachan, associate professor of Christian theology at Midwestern Baptist Theological Seminary, wrote in a blog post, “The trend of evangelicals affirming homosexuality is not going away. The division this trend is causing is awful. We lament it deeply, particularly when we have learned so much from leaders like Peterson … Let us not lose heart. And let us pray for Eugene Peterson, that he may return to the old paths.”