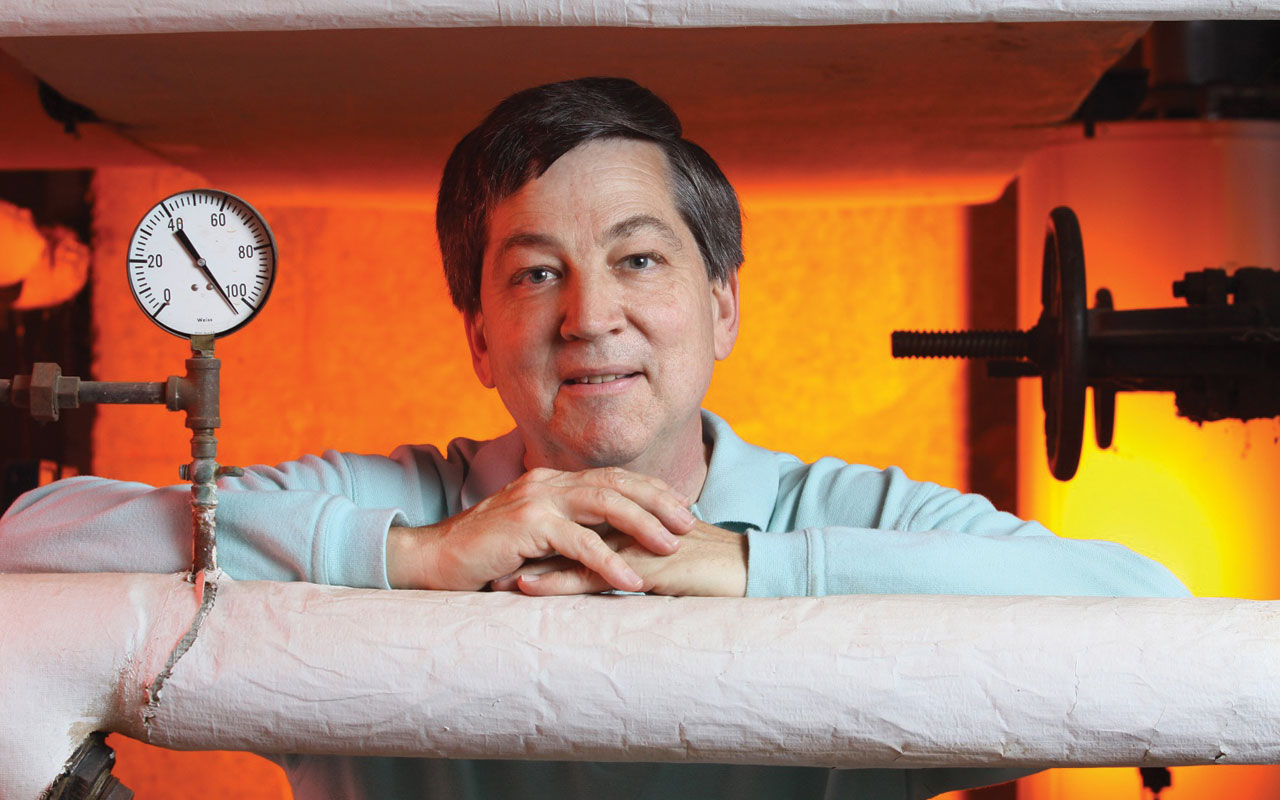 SHAWNEE—Strolling through the campus of Oklahoma Baptist University (OBU), you see a lot of things. A picturesque setting of trees and flowers, the iconic Raley Chapel, students bustling about between classes. You might also walk by the fountain, sidestep scampering squirrels on the sidewalk, meander past someone in a hammock or overhear another playing a guitar under a shaded tree. Yet somewhere, you could always find him … Bill Pope, that is … with camera up, capturing those passing moments of life on Bison Hill.

Pope has captured thousands upon thousands of iconic images, documenting more than a quarter century of life on Bison Hill. So many moments, so many photos, frozen in time through his lens. With his retirement on May 31, Pope’s photographic legacy on Bison Hill now draws to a close.

Pope grew up in Georgia, and though time and fate took the man out of Georgia, nothing could ever take the Georgia out of the man. His love for his home state and for the world famous Georgia-made Coca-Cola shines through, as well. Just ask him. But be sure you have enough time to learn a lot … a LOT about the Peach State. His humor and wit are sharp and dry, yet always present, never letting the moment pass for a witty one-liner and a wry smile.

Raised in Hawkinsville, Pope found a love for photography in high school.

“My brother was in the Navy, and he showed up one day with a 35 mm camera, and I took it from there. I was probably in the 9th or 10th grade. By my early 20s, I was getting pretty serious with cameras. My dad saw that and didn’t like it. He told me, ‘Son, one day you’re going to starve to death with that camera.’ So, I took his advice, and I sold my equipment so it wouldn’t be a distraction to making a living.”

Before selling his gear, he had gotten into shooting cattle and landscapes around his home place.

“About a year and a half later, the editor of the Angus Journal came by our farm, and I showed her a few slides I had taken of cattle. She loved them and immediately bought them for covers. So, after that, I thought I can make money and can at least keep photography as a hobby and make money. So, ever since that time I’ve never put the camera down for very long.”

He used the money earned from selling his cattle photos to purchase new equipment. “Once I got some more good shots, I started submitting samples to Angus Journal and other magazines. They kept buying, and so I kept shooting. And since I kept shooting, they kept buying.”

In fact, Pope became of the most renowned cattle photographers in the nation, if not the world. His photos have graced more than 90 covers of Cattle Today as well as countless other publications and magazines, and they have also been used in advertisements and more. At last count, he has sold more than 625 cattle photos in all.

In 2012, he published the book, The Voice in the Wilderness, a photographic journey of faith seen through images of the swamplands of the southeastern United States. The book was compiled with photos he took during his early years back home in Georgia, a culmination of a long dream to publish this work with a spiritual theme harkening to John the Baptist.

God opened the door for Pope to come to OBU through a friend that heard of the job opening.

“I knew the head photographer at the Foreign Mission Board, Don Rutledge. I had assumed I would work for a newspaper and I liked photojournalism, but I couldn’t find an internship and didn’t know of a job. So one day, I thought about universities, and I went to the library to get phone numbers and start calling universities about photographer job openings. When I got home that night, there was a message that Don had called. He told me that OBU had an open photography position. I sent a portfolio and a resume, then came out and interviewed.”

And the rest is history. He made the move and got started on campus in August 1990.

With so many memories to choose from, it was hard to pin down one or two specific things that stand out most in his mind over 26 years of covering the campus. Yet, he was quick to say that Welcome Week, that time in August when new students converge on campus and learn what it means to be a Bison, was his favorite time of all.

“Welcome Week is one of my favorite things to shoot, since it’s picturesque and there are a lot of interesting things to shoot,” he said. “I especially enjoyed shooting some of the group shots at night with the family groups.”

When asked what he would miss the most upon retirement, that answer was easy.

“The people I’ve come to know, for sure. I’ll miss seeing the students and interacting with the students a lot. I’ll miss my co-workers and getting to see them every day. It’s also been good to work in a Christian environment.”

Going out with a bang

Bill has won many awards through the years, for his photography at OBU and for his cattle photography. But none may be bigger than the one he received on a Friday afternoon in May, during Spring Commencement. He was named the 2016 recipient of the Meritorious Service Award, presented annually to a faculty or staff member who has made a substantial commitment of years and service, and who has been a loyal and faithful faculty or staff member.

In presenting the award, OBU President David W. Whitlock said Pope’s work has been crucial in promoting the University and documenting its history for more than a quarter of a century.

In quoting one of Pope’s nominators for the award, Whitlock said, “Not one who enjoys the spotlight, Bill humbly documents OBU’s history through his gift of photography.” Whitlock cited another nominator, who stated, “Bill’s tireless service and dedication to OBU for more than 26 years is a shining example of what this award is all about. From the mind of God, through the lens of Pope, to the hearts of all Bison … his images will endure and serve as a record of more than a quarter century of our University’s history.”

In April, Pope also took home four awards during the Baptist Communicators Association national convention. This included a first place win with a series of photos shot during, you guessed it, Welcome Week. He added a second place award for a shot of students casually relaxing in a photo he dubbed “Hammock Hobnobbing,” as well as another second place finish and a third place recognition to round out the awards.

Life Beyond the Hill

As he thinks about retirement, he said he knows exactly what he will do next.

“A lot of traveling … from the bedroom to the kitchen,” he quipped. “I have a house and yard full of stuff to do.”

He always plans to remain a part of the campus community, attending chapels and sporting events, yet as an audience member with no camera, no lens, no moving to the next shot. “It will feel funny sitting there not shooting. After shooting chapels for 26 years, it will be strange to sit there and not work.”

He is very much looking forward to spending more time at home with his wife, Valerie, and their daughter, Kimberly, who just graduated from Shawnee High School in May.

Pope says he has made a career of shooting “Bison, bovine and brides.” There’s the wit mentioned earlier. His best guess is that he has shot at least 45 weddings, but is no longer taking photos for brides. He’s shot hundreds of cattle, but isn’t currently shooting any bovines. And with his retirement from OBU, after thousands upon thousands of photos capturing life on this beloved campus, Bill Pope will be letting go of those Bison as well … leaving a legacy beyond compare and readying himself for the next adventure, whatever that may be.