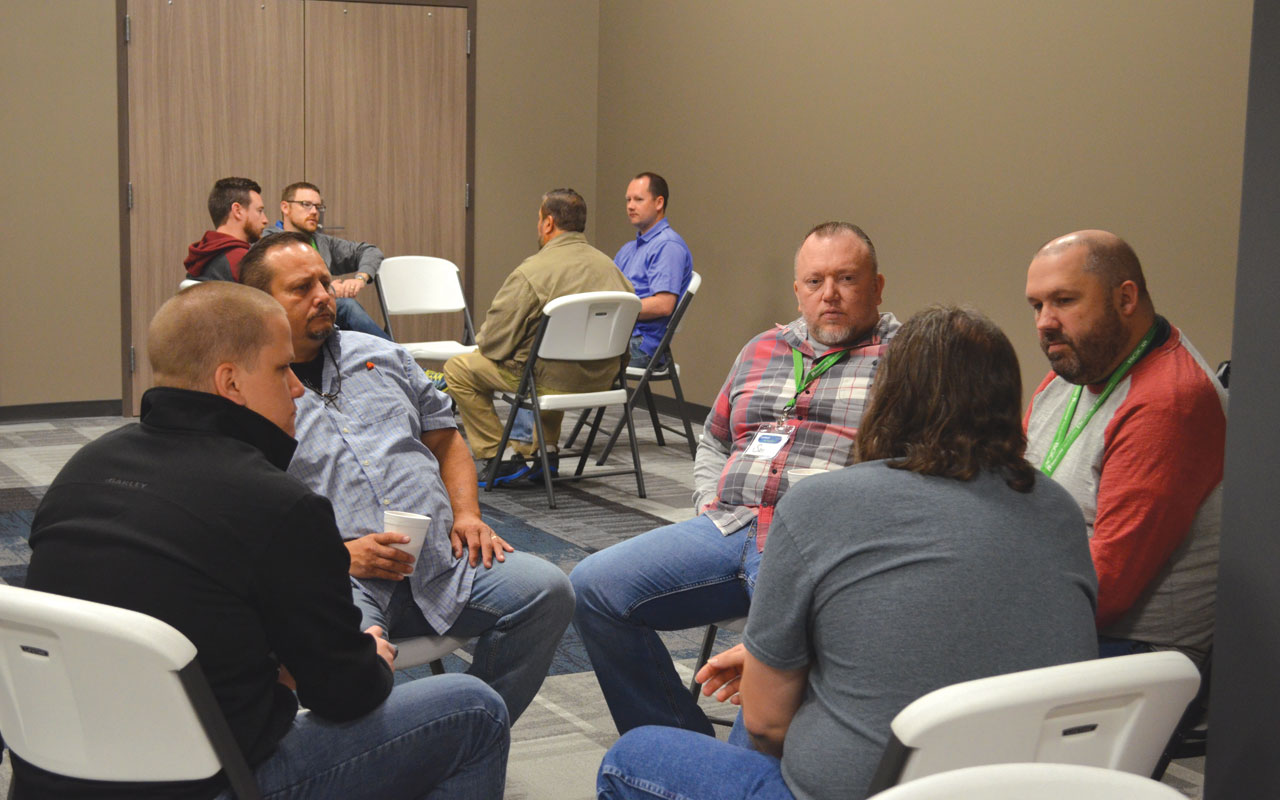 Convened at the Mathena Family Event Center and housed at the new Thompson Family Lodge in the camp nestled in the Arbuckle Mountains, 13 funded church planters and their families—a total of 92 participants—spent two days having fun and enjoying great food and fellowship.

“It was a great time to relax our body, refresh our minds, and restore our spirit for church planting with special guest Gordon Fort, senior vice president of the Office of Prayer with the International Mission Board,” said Paul Stevens, BGCO church planting specialist. “There was a large variety of people, including a group of hearing impaired people, cowboy church folks, and urban and suburban people. It was interesting to see all of them interacting with each other.

“I know that people walked away asking when the next conference is scheduled. This was valuable to them. At the same time, we gave them a very comfortable place to come and feel rested. There is a feeling of comfort there in the lodge and event center.”

In addition to the relaxing atmosphere, Fort spoke four times on prayer and the importance of a personal  relationship with God. One session dealt with “The Journey Toward Spiritual Union with God,” an integrated model that brings together patterns of knowing, being and doing in the quest for a deeper relationship with Christ, based on an adaptation of Janet Hagberg and Robert Guelich’s six-stage journey model, and “An Experience with Solitude and Silence: A Time to Be Yourself with God.”

“One of the things he emphasized was each of them sitting back for one hour each week just listening to God, sitting back in silence and solitude, shutting out everything else and letting God speaking to them,” Stevens said.

“He was telling us church planting is a work of God, and if we don’t pray, we aren’t smart or clever enough to do what has to be done. Our own strength is never enough for what God is trying to accomplish.”

For the first time this year, the conference offered child care for the families, something Stevens said provided an unexpected and pleasant benefit.

“There was another consequence I didn’t fully expect,” he said. “Because we provided child care, the wives came and were able to focus on the event because they weren’t worried about their children. Thus, the wives really felt ministered to, as well.

“I didn’t realize we had not provided child care before, and that’s one thing we’re going to focus on in the future—bringing the wives in—because they are an important part of this calling.”

A couple of the participating pastors agreed.

“I have been to three of these conferences, and this was the best one yet. I think they did an excellent job including the families,” said Nick Tarter, Pastor of Bethany, City Life. “Everyone who does this knows that ministry is not just something that a pastor does by himself. It’s a family endeavor and, especially in church planting, there are so many things involved. So, I think they did a really good job making it not just an information dump, but  realistically a rest for church planting families.

“I also appreciated the emphasis on prayer and spiritual revitalization, rather than just giving us technical information. I thought they did a fantastic job this year focusing on the spiritual aspect of what we’re doing and the need to be in prayer.

“I am very encouraged by the direction of the church planting group and its ministry to all of us. I am grateful for it.

Sam Watkins is pastor of Midwest City, Victory Chapel, a new church plant only three months old serving the military community. He has been retired from the Army for 10 years.

“I thought they achieved their goal 100 percent as a time of retreat, refreshing and pouring into,” he commented. “I thought using Falls Creek to bring the families in was just what the doctor ordered. And the platform for prayer and moving away from the daily grind of church planting and just hitting, hitting, hitting on that and emphasizing our prayer life, instead, was exactly what we needed.

“I thought Gordon Fort did an outstanding job. He was well-studied on his audience,  and well-prepared for who he was  ministering to. I think he delivered the Lord’s message and not his.

“It was good to see the younger guys have, for lack of better words, a mini-vacation. The way the conference was structured, there was plenty of family time. It truly was a retreat.”

In addition to Fort, the group also heard from Anthony Jordan, BGCO executive director-treasurer, about the Cooperative Program and a “Heart for Church Planting,” Alan Quigley, BGCO Mobilization Team leader, “Prayer and Evangelism,” and had a Q&A session with Stevens and BGCO church planting strategists Antonio Conchos and Randy Proctor and Emerson Falls, Native American specialist.

Proctor said the Convention has identified 40 groups of people who have been overlooked and who need the Gospel. Falls added that western Oklahoma “is one of the areas of greatest need” for Native American church plants.