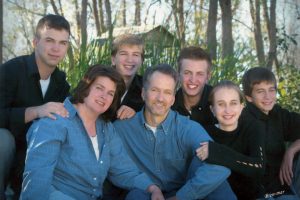 Mark and Renae Johnson with their five children in a photo taken during the time they were a foster family. The Johnsons fostered children for 12 years.
[Photo provided]

Piedmont—When Mark and Renae Johnson, members of Piedmont, First, began dating, Mark told Renae that he was unsure about how he felt about children.

Now, after 38 years of marriage and five biological children, Mark laughs at what he said years ago. Five children of their own would be enough of a reason to laugh at his younger self and how much he claimed not to like children, but there have been many more children in his life.

Mark and Renae began fostering children in 1996. Twelve years later, 51 children had passed through their home. Both Mark and Renae claim there were hard times, but they believe their family is better for having been on the journey where foster care took them.
“I think starting out, the big struggle for us was answering God’s call against our own desires. And I had to get over my selfishness to begin with, but we started, and that was all it took, just starting,” Mark said.

Not only did Mark and Renae agree to open up their home and become a foster family, but they agreed to take in teenagers who had more “therapeutic” needs, which usually meant children and teens who had been severely abused in their lifetime.

Throughout these years, the Johnsons have kept contact with many of their former foster children, still connecting with many whenever they get the chance. They fondly remembered the first foster child to enter their home.

“In August of 1996, we got our first child. We did pick her up from the psychiatric hospital. She was with us for three and a half years, and we still have contact with her today. She lives in Woodward, and when I travel for my work, I stop by and eat breakfast with her and at least see her at work,” Mark said.

Renae recalls the beginning of their family’s foster care journey. She was opposite of Mark’s previous hesitation towards children. “There is no such thing as too many kids,” she said with a laugh. “That’s what I always say. That’s my standard. I wasn’t born to be a doctor or a lawyer, I was born to be a mom.”

The stories are plenty between Mark and Renae of struggle and hardship with different children and teenagers who entered their home over the years, but so are the stories of victory in Jesus.

Some who entered their home had to be watched around-the-clock due to being placed on suicide watch. Others had been abandoned and abused many times in their short lives.

Renae recently spoke with a foster child they housed. She told Renae that all the times Renae used to calmly brush her hair and sing hymns, she admitted to thinking Renae was crazy for treating her with the love she had. Renae didn’t know her, after all. However, she told Renae, she now sings the same hymns to her own daughter, as she brushes her hair at night.

Many children that passed through the Johnson home made professions of faith in Christ. The Johnsons said they didn’t raise any child differently than they did their own, and that included telling them about Jesus and taking them to church.

All along the way, Mark and Renae said, “We knew that God was doing through us what He wanted to do. You have to have an open ear for the Lord to speak. We just tried to listen.”

Renae works for the Juvenile Justice Center for Canadian County, and together they have taken upon themselves to minister to children who have “aged-out,” so to speak, of the foster care system.

“We now minister to former foster kids. Because it’s not always an ideal situation when they graduate and are now supposed to be on their own,” Mark said.

“Our foster kids and foster kids from other families know that they can call us any time, and we will do what we can to minister to them. We’ve even had a parent of one of our foster children live with us later as she was dealing with addiction issues and an abusive home situation.”

The Johnsons admitted that it took them some time before accepting that the Lord called them to be foster parents. They said they made many excuses, but each time they made an excuse, the Lord provided in the area that they thought they previously lacked resources needed to foster.

Now they challenge their fellow brothers and sisters in Christ to take an active part in solving the foster care crisis in the state of Oklahoma.

“The foster care problem is the gap that the Church could fill,” Renae said. “When we started fostering, my family thought we were crazy, especially since we were willing to take the therapeutic kids.”

Now members of their extended family have also fostered children. Renae’s parents even adopted twins. “At age 42, I got my first sister,” Renae exclaimed.

“There is a lot of waiting in foster care. Waiting for placement, waiting for a child to grasp that we love them. There was so much waiting,” Mark recalled. “But God really strengthened us in the waiting.”

For more information about foster care and the upcoming event “The Gospel, the Church, and Foster Care,” which will follow the Annual Meeting of the Baptist General Convention of Oklahoma on Nov. 13, visit www.bgco.org/foster.