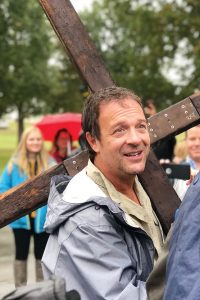 My inspiration for carrying the cross up Mount Kilimanjaro a few years ago came to me through a man named Keith Wheeler. I have known Keith for a long time, and he is one of my favorite missionary speakers.

Several years ago, I was talking to Keith about my upcoming 40th anniversary of entering the ministry. I asked him, “How do you thank Jesus for allowing you to represent Him around the world?”

Keith looked at me with those steely blue eyes and said, “No one has ever summited Mount Kilimanjaro with a cross.” And with that one sentence, God began to nudge my heart about making this climb.

Keith is a missionary, but he would probably call himself just a follower of Jesus Christ. Since 1985, he has carried a 12-foot, 90-pound cross across 120 countries. As he walks, God brings people to him from all races and nations to have conversations about the cross. After many of these conversations, people walk away with a newfound relationship with Jesus.

Keith is a humble man who gives God the glory for everything he has done. He could tell you the story of the time he woke up in the jungle of Panama surrounded by Columbian guerillas, who all had their guns trained on him. As the standoff grew more intense, the guerillas began shielding their faces and yelling “La luz, las luz!” (“The light! The light!”) They soon dropped their guns and ran off. God had shown up behind Keith, and His glory blinded the rebels.

As Keith has carried the cross, he has been run over, left for dead, stabbed, jailed and put in front of a firing squad. Once, he was speaking from a balcony in Jamaica when it gave way underneath him. He broke his leg in 21 places, and doctors told him he wouldn’t walk again. But they didn’t know the God who had called Keith to take up his cross and follow Him.

Since his journey started, Keith has walked across every war zone. From Rwanda to Nicaragua to Iraq, he has walked between the two warring factions, letting them know the Prince of Peace wants to do a work there.

One of my favorite Keith Wheeler stories is not about being captured or beaten but a simple story of God’s provision. In between encounters, Keith finds himself alone and spends lots of time in prayer. Once, he was walking in the bush of Africa, going from one village to another. It was extremely hot, hovering in the 100s.

Walking along in the intense African sun, he asked God for a drink, not any old drink but specifically a cold Orange Fanta. What an odd prayer to pray in the blazing heat of Africa! “This is the confidence we have in approaching God: that if we ask anything according to His will, He hears us” (1 John 5:14).

Before long, he saw a black car making its way down the road, dust billowing up behind. As the black sedan pulled up beside him, it slowed down to match his pace, and the darkened rear window slowly buzzed down. Inside sat an elderly lady in the back seat, dressed as though she were going to a formal tea. She told Keith that God had spoken to her three hours ago about finding a man walking with a cross, so she asked her driver to take her to look for him.

“Would you like something to drink?” she inquired. I guess asking the obvious was one of her spiritual gifts.

Inside the trunk, she had a large cooler, and filling the cooler was—you guessed it—bottle after bottle of Orange Fanta. God had answered Keith’s prayer even before he prayed it. Isn’t that just like our heavenly Father?

I tell you this story because on Oct. 25, this year, Keith asked his friends to join him as he carried the cross from the praying hands at Oral Roberts University up to the flame on the campus where he started this journey more than 30 years ago. When he completed this walk, he had carried the cross 24,901 miles, which is equal to the distance of walking around the world at the equator.

In typical Keith Wheeler fashion, when someone asked what it was like to finish carrying the cross around the world, he said, “I am not finished. This is just the first lap.”

As he was taking the last steps in his walk the other day, out of the crowd, a hand reached toward him, and in that hand was a bottle of Orange Fanta. All of us who knew the story just smiled.

No matter where you are on your journey, God still provides. Congratulations, Keith, on starting your second lap! Love you, brother!