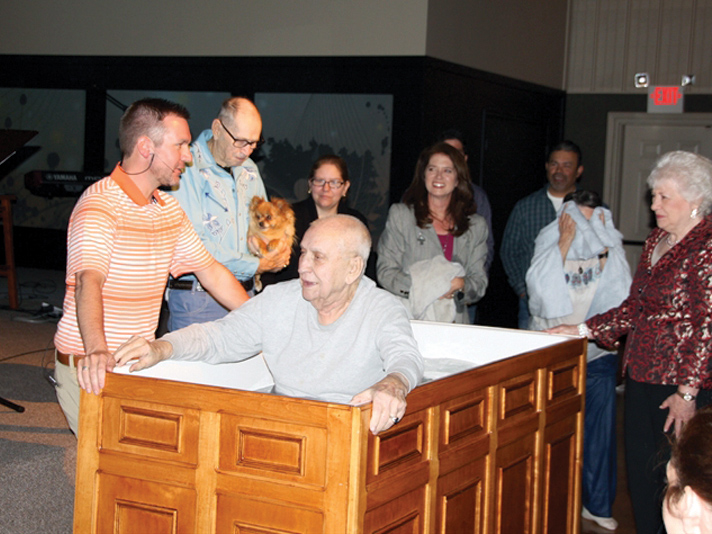 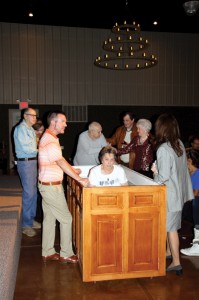 In Luke 18:1-8, Jesus tells the parable of the unjust king who meets a persistent widow and agrees to give her justice just so she won’t wear him out by her determined visiting. The first verse says Jesus told this parable to encourage His followers to continue to pray and not become discouraged.

Kristn Punjabi is a modern day example of this passage. She has been praying for her neighbors, Mr. and Mrs. Hurley, since 2003. In her prayer journal, she wrote down their names. She also would visit the Hurleys, take her Bible and song book to read and sing to them, but on three different occasions, they rejected her request every time.

Next to their names in her prayer journal, Punjabi wrote II Cor. 4:4, “The God of this age has blinded the minds of unbelievers as they cannot see the light of the gospel of the glory of Christ who is the exact image of God.”

“I prayed that the Creator and Only One, True God would reveal Himself to my neighbors and draw them to Himself,” she said.

Mr. Hurley moved to a nursing home last year. Punjabi said their relationship deepened, and Mr. Hurley’s heart was softened after he made this move. “He was now open to talk about Jesus Christ and His great love and provision,” she said.

Last summer, Punjabi was preparing for a family vacation, but she was moved emotionally. She wondered what would happen if Mr. Hurley would die while they were gone. “I had to know that I would see him again in Heaven,” she said.

Passionately praying, she asked the Lord if she could be the one to lead Mr. Hurley to faith in Jesus Christ. Before making a visit to the nursing home, she asked friends to “pray that today would be the day of salvation” for Mr. Hurley. 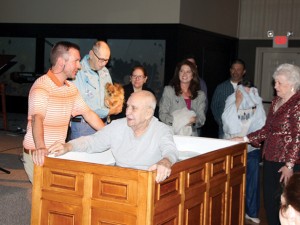 After many years of praying for her neighbors, Kristn Punjabi, center, holding towel, witnesses Edward Hurley’s baptism, after leading him to the Lord last summer.

“Armed with prayer, I went to see Mr. Hurley,” she said. “God had prepared his heart. He was ready to receive God’s greatest gift. He confessed that he was a sinner and needed Jesus Christ’s perfect sacrifice to cover his sin.” Mr. Hurley accepted the Lord as his personal Savior.

Recently, Punjabi gave testimony of this experience at her church, Oklahoma City, Gateway. She shared that many thought baptism was out of the question for Mr. Hurley. At 86 and dealing with lung cancer, he is now on hospice care.

What was thought to be “out of the question” became possible. Edward Hurley went to Gateway and observed the ordinance of baptism. With the help of several men, he stepped into the portable baptistery and made his profession of faith known. Mrs. Hurley also made a profession of faith and preceded her husband in believer’s baptism.

“What a day of rejoicing and many tears as we witnessed the two get baptized!” said Shelley Urton, member of Gateway and Women’s Missions and Ministries, Church Relations consultant for the Baptist General Convention of Oklahoma. “Our community group has been praying with Kristn for several years.”

Mr. Hurley’s brother also was in attendance to witness the baptisms.

“To the glory of God, may this story never cease to be told to inspire others to reach out to their neighbors, colleagues and classmates,” said Punjabi.