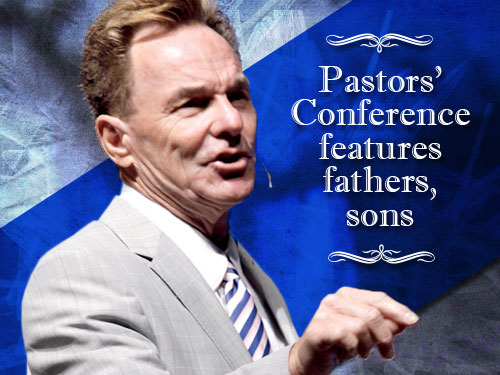 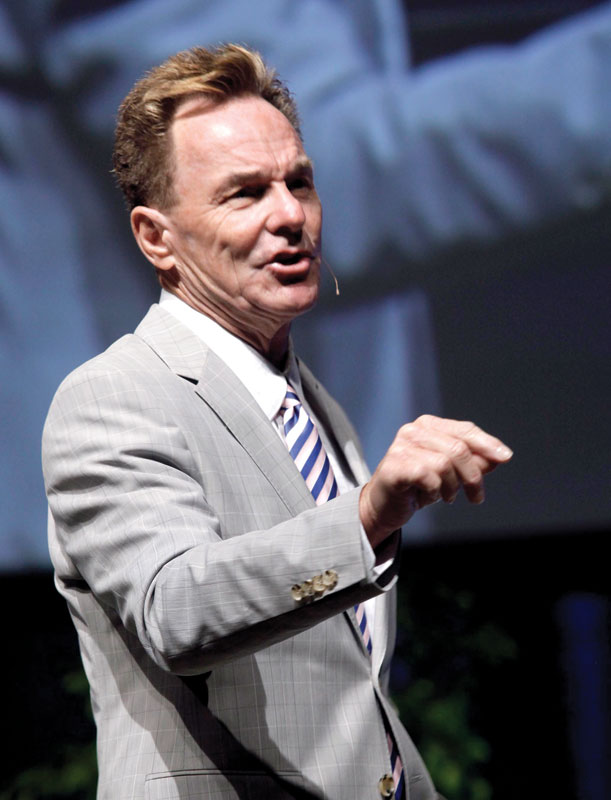 Ronnie Floyd, pastor of Cross Church in Springdale, Ark., speaks during the evening session June 17 of the two-day Pastors’ Conference in New Orleans. His son, Nick Floyd, introduced him.

NEW ORLEANS (BP)—A Father’s Day theme marked  sessions of the 2012 Southern Baptist Convention Pastors’ Conference June 18, with speakers being introduced by either their fathers or their sons.

Former SBC president Bailey Smith, former pastor of Del City, First Southern, introduced the first speaker of the conference, his son Josh. Bailey praised God for all three of his sons, each of whom  is  serving the Lord in Baptist institutions and churches, and gave most of the credit to his godly wife. He described his son Josh as a child as an energetic grasshopper on roller-skates, but he watched God “take his life early and really mold him into something wonderful.”

“I realized the first time I heard Josh preach that I wasn’t hearing my son, I was hearing a man of God,” Bailey Smith said. Turning to his son, he said, “Josh, I love you and I’m proud of you, not because you’re a good preacher, but because you’re a man who loves the Lord and preaches His book.”

Josh Smith, pastor of MacArthur Boulevard Church in Irving, Texas, preached from Jonah 3 on the proper response to God’s Word. Noting that most people want to experience the extraordinary instead of the ordinary, Smith reminded pastors, “Big doors swing on small hinges.”

The Book of Jonah, Smith said, presents an irony between the responses of God’s prophet and the pagan people. Jonah demonstrated two improper responses: He ran from God’s Word, and then he resented God’s Word. The Ninevites, however, responded in humble faith and repentance.

“God will accomplish His plan, and He will accomplish it through someone,” Smith continued. “The only question is will it be you? And I pray that somehow by God’s grace and for His glory that as you respond properly to the Word of God that it will be.”

Father-son pastors Ronnie and Nick Floyd teamed up to preach a sermon. The two alternated turns in the pulpit, challenging pastors to develop an expanding vision for their cities.

“Have we forgotten the vision of reaching our cities, our communities, our villages and our towns?” Nick Floyd, pastor of the Fayetteville, Ark., campus of Cross Church, asked.

Ronnie Floyd, senior pastor of Cross Church in Northwest Arkansas, lamented that many pastors have forgotten that God has called them to reach the people outside the church where they live. Pastors, he said, must see their calling theologically, providentially and purposefully.

“Where you are is part of God’s plan,” Ronnie Floyd said. “God’s providence has guided you, has blessed you, and has placed you to live in this time in all of human history and to let you live where you live with a purpose.

“God has called you to live where you live, to lead the church you lead, with the gifts you have, for one purpose: to fulfill God’s vision of reaching every person in that region with the Gospel of Jesus Christ,” he said. “You were made for this moment.”

Tony Evans, pastor of Oak Cliff Bible Fellowship in Dallas, preached with his son Anthony Evans, a gospel music artist and recent contestant on NBC’s “The Voice,” introducing him.

Following the pattern of Psalm 128, Tony Evans preached about the effervescent results of a man who fears God. This man, who Evans called a “Kingdom man,” takes God seriously, and because he does so, leads his family according to God’s Word. Evans used this second point as an opportunity to speak to the current debate about same-sex marriage.

“What God wants is men, partnering with their wives, who run their families according to God—because the saga of a nation is the saga of the family, in large,” he said. “Marriage is not a civil institution; marriage is a divine institution to be recognized in a civil society.”

A family that takes God seriously overflows into a church that submits to God’s rule, he said.

“God didn’t come to take sides, He came to take over,” Evans said. “It’s time for the church to wake up and go public. We don’t have time for a white church, or a black church or a Hispanic church. We need the church of the Lord Jesus Christ.”