Passing on the Good News 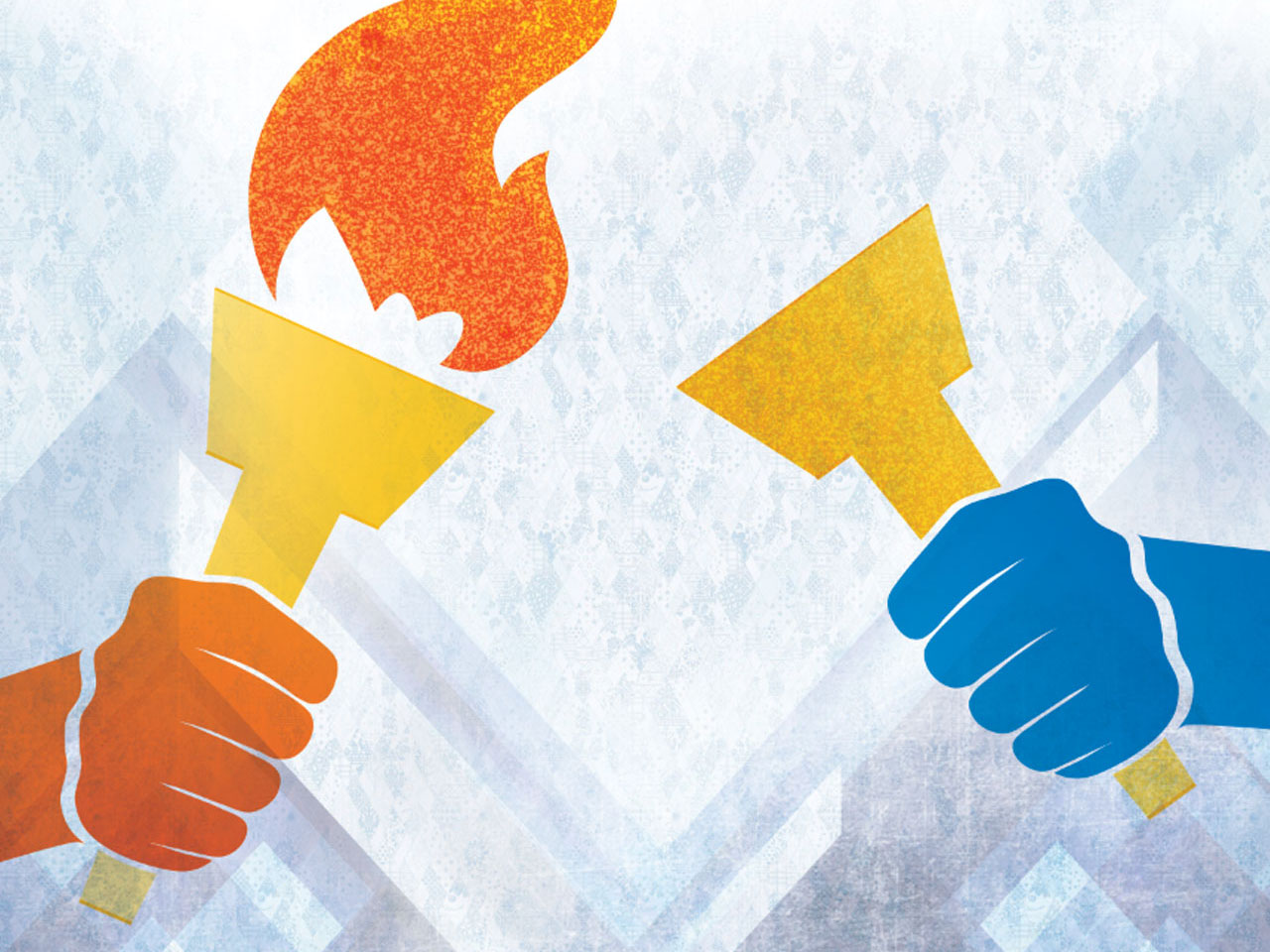 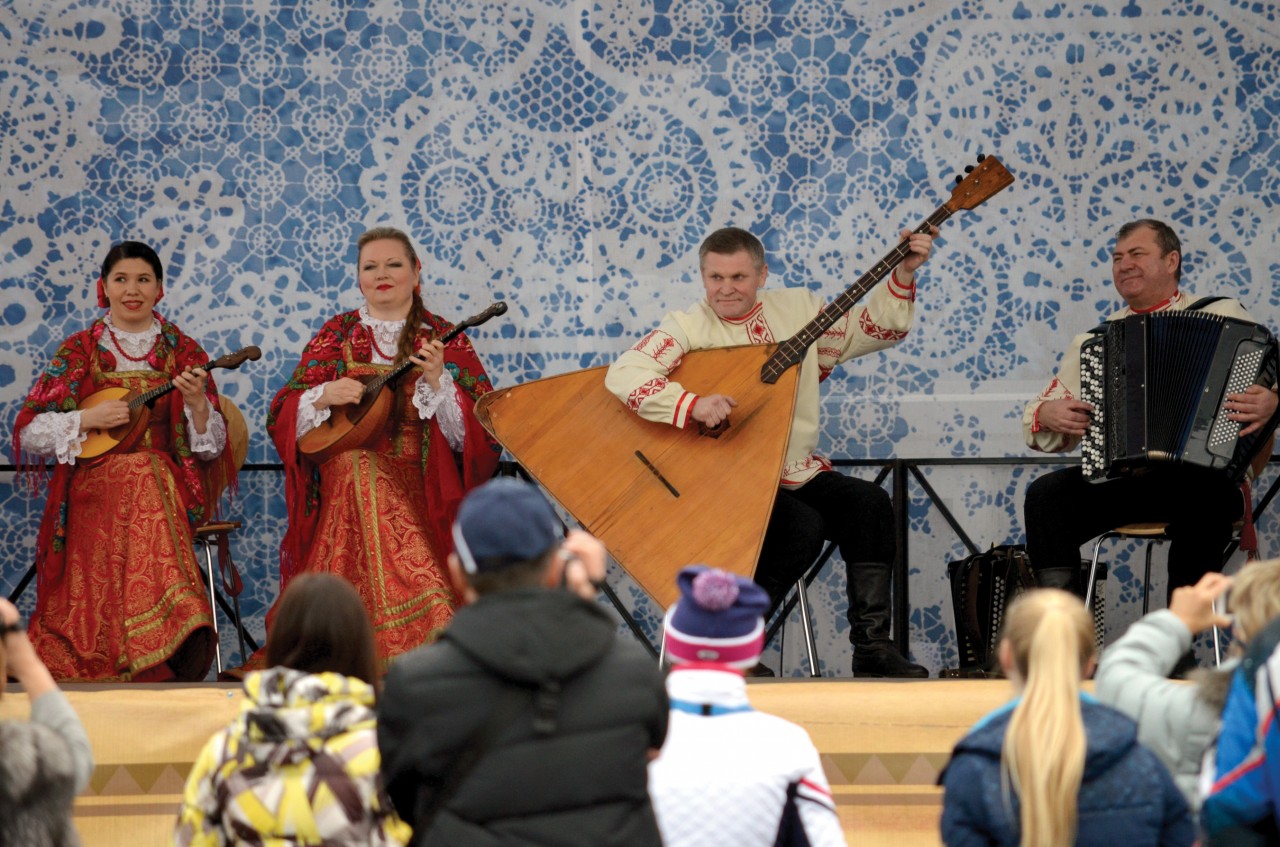 MOSCOW/SOCHI, Russia—Trusting God to lead them to divine appointments, 73 members of the Singing Men of Oklahoma and 16 companions traveled to these two Russian cities Feb. 4-14.

As a result, at least two people experienced an eternity-changing encounter with Jesus Christ, and the seeds of His saving grace were scattered literally around the world.

Participating in the Engage Sochi initiative, the group ministered first through three concerts in churches and other outreach efforts in the Russian Capital Feb. 5-9, before moving on to Sochi, the site of the XXII Winter Olympic Games, Feb. 9-13.

Using specially-designed Olympic trading pins attached to a small tract with the gospel message printed in both English and Russian, the Oklahoma group set out to either trade the pins or just share them with others they met.

Marc Ira Hooks, Engage Sochi coordinator and a graduate of Oklahoma Baptist University, defined the Engage Sochi Mission Statement: “We are here to make a difference for Christ in Sochi and beyond. The goal is to make relationships, and then connect those with whom we make relationships to church planters wherever they are around the world.” 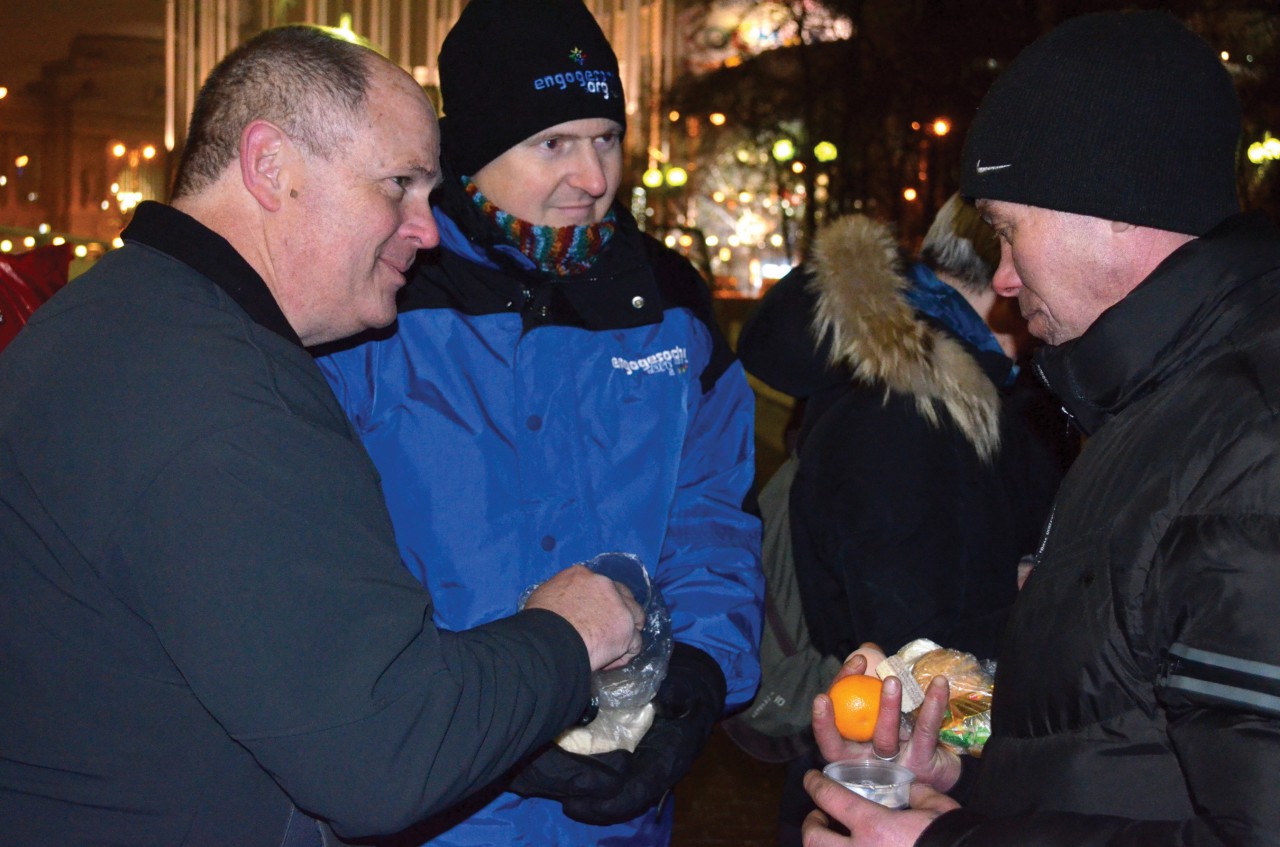 “It was awesome,” said director Randy Lind, worship and music ministries specialist with the Baptist General Convention of Oklahoma. ”From leaving to coming back, the group had great attitudes. They knew what the mission was about, and I think in every way, we accomplished that mission. It was a great blessing for me to see that as we got on the trains or buses or just walked down the street, they engaged people with the pins or established relationships with them and shared Christ as they could.

“I was very pleased with that, and, of course, the highlight was to see two people come down the aisle and receive Christ as Savior.”

Lind said despite security concerns emphasized repeatedly by the media, God’s hand of protection was on the group.

“All of the things that we were mostly concerned about—security, government intrusion and any life-threatening events  never came to pass,” he emphasized, adding appreciatively, “I think there were as many prayers lifted up about this trip than any we have taken.”

Lind said two aspects of the trip were especially significant to him. 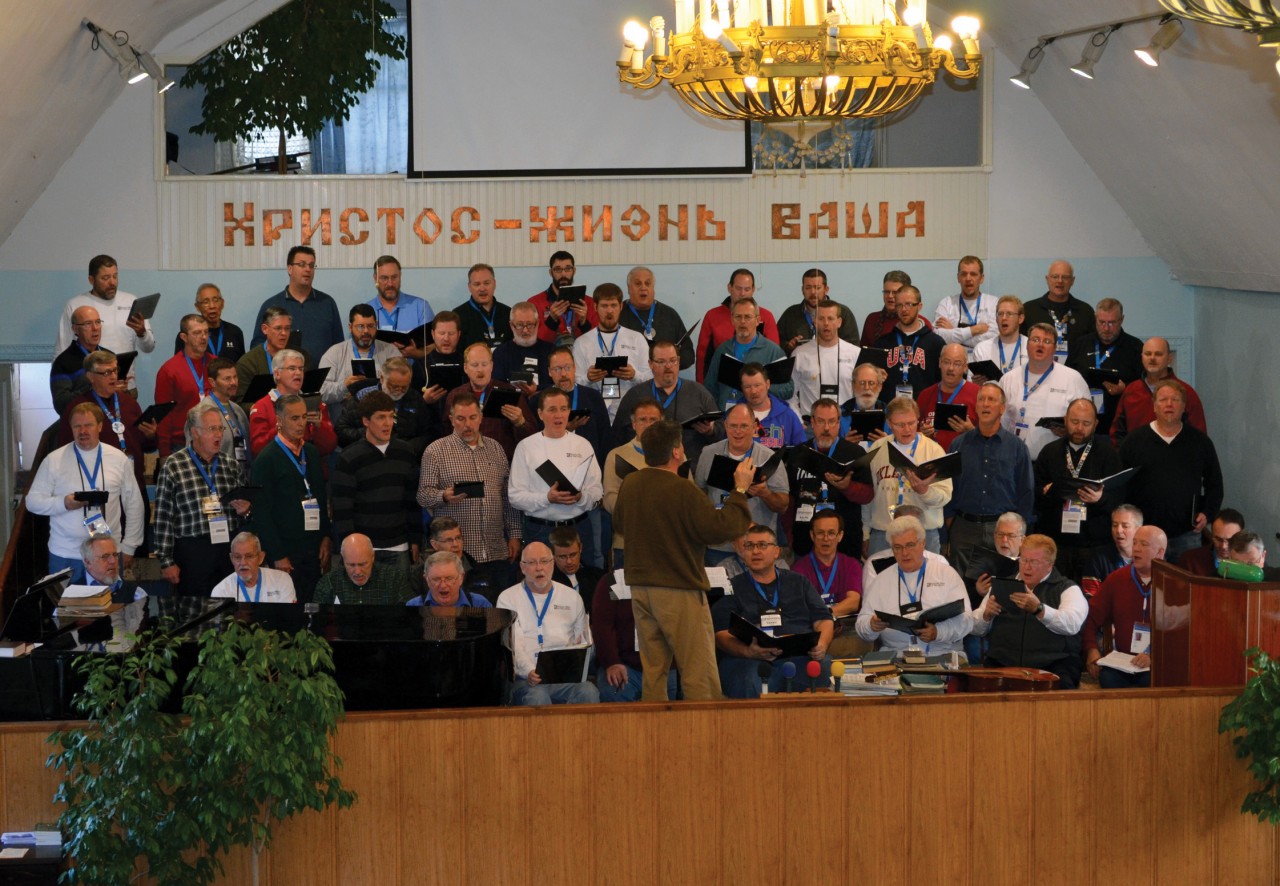 The group sings at Central Baptist Church in Sochi.

“One event near and dear to me was the opportunity to sing on the stage in the Mayor’s Plaza in Sochi,” he said. “That was something we tried to get permission to do when we had been there a year ago and they wouldn’t hear of that, but when we got over there, God opened that door spontaneously for us, and so we were able to sing there right outside of the mayor’s office.

“Then, the other thing was the Institute of Spiritual Music in Moscow. Those students were so open. They came from all over Russia, and they were so tuned in to what our guys taught.”

Several of the Oklahomans spent two days leading workshops for the students.

As the larger group broke down into smaller units, other ministry opportunities opened up. Some prayer walked in the city’s famous 300-acre Gorky Park, praying for the people who were ice skating and snowboarding at the time and for the thousands of young people who will be coming to the park in the summer to participate in a number of activities such as basketball,  volleyball and aerobics. 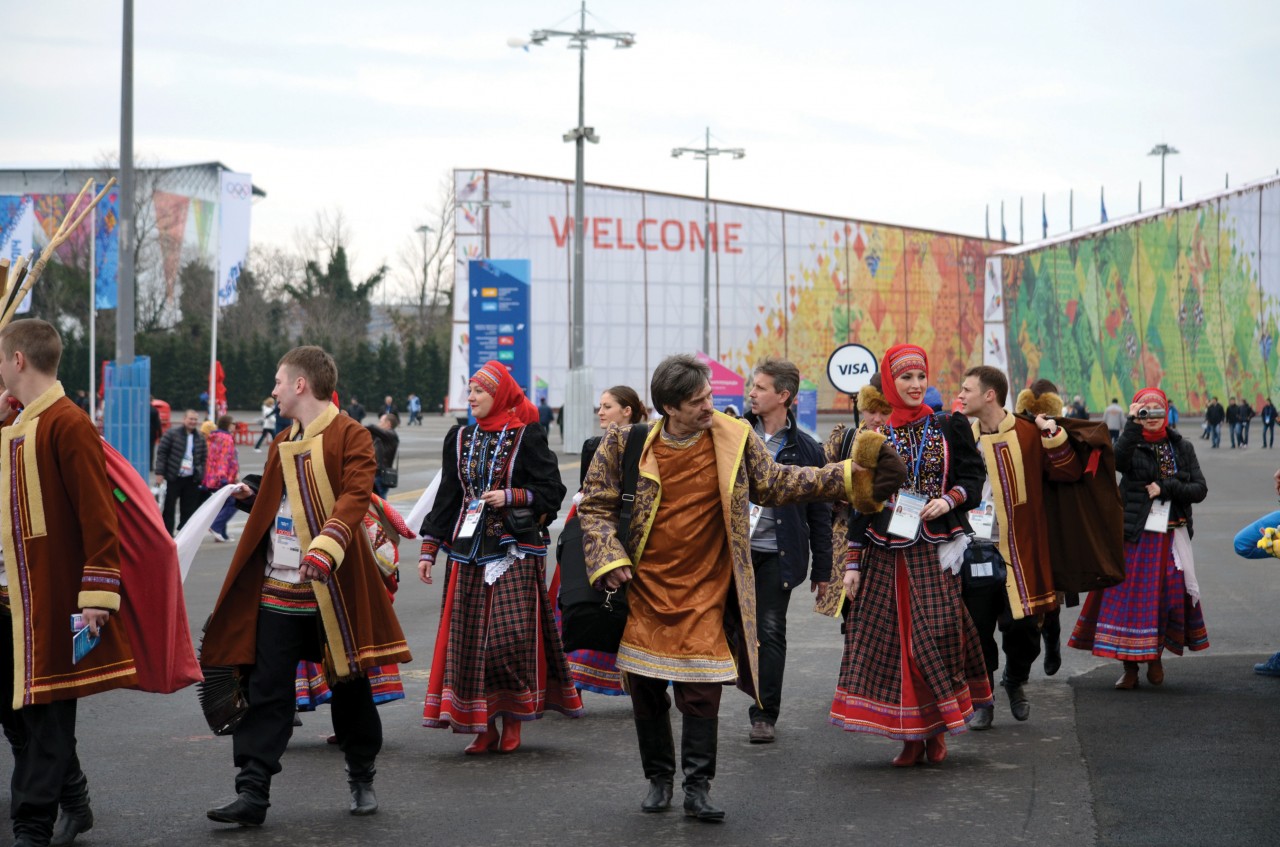 Some of the men’s wives who are teachers spent time at Second Baptist Church with an English as a Second Language class, asking and answering questions and singing songs.

Another group was privileged to share God’s love with children in an orphanage and in an emotionally-charged setting one evening, the entire group sang for and helped distribute food to about 20 homeless men and women in a Moscow park.

Physician Steve Ditto from Midwest City, Country Estates was able to consult with cardiologist Valentina Belahsova, and give her much-needed medical supplies and equipment to help her minister to members of 20 churches and nursing homes in Moscow.

“We really appreciate the support of Anthony Jordan and many others here in the Baptist Building and from people in the churches all across Oklahoma in providing the knitted scarves and hats we were able to give away and for their prayers and financial support for their men who went on the trip,” Lind said.

In Sochi, each participant was able to attend at least one Olympic event. Women’s ice hockey took center stage, with some watching Sweden defeat Germany, 4-0, and others witnessing the U.S. team drop a 3-2 decision to Canada in the preliminary rounds. Others were able to see Curling action. 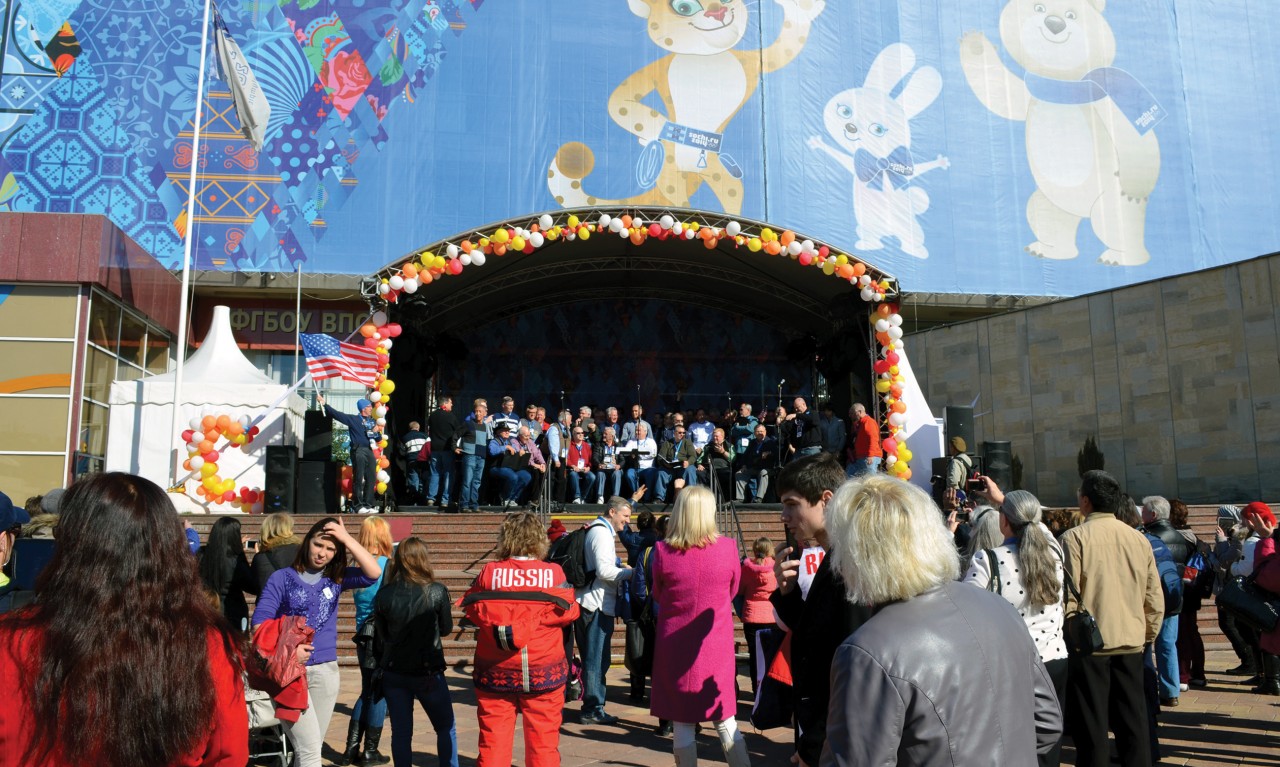 The men sing in the Mayor’s Park in Sochi with the official Olympic mascots providing.

Harold Drake, minister of music, media and senior adults at Kingfisher, First, said one of the highlights of the trip for him was, “When we gave out the Engage Sochi pins, the look of surprise of the faces of the people and we weren’t expecting anything in return. Also, just the pure joy of seeing so many smiles on the faces of the people. Obviously I think they were in a worship attitude, but I just feel like they were so enamored that we would come so far to sing for their church.”

Kevin Willis, pastor of worship at Tulsa, Woodland Acres, was surprised by the group’s reception by the Russian people.

“I expected a more cold reception, less emotion, but what I have found is warm hearts, very friendly and helpful (people),” he said. “Strangers helping us; they see we’re not from here, and they ask us if we need help. Not even regular (Olympic) volunteers, but the common people have been helping, so it’s been a very warm reception.”

Mark Spena, associate pastor of worship and children at  Weatherford, Emmanuel, said his most meaningful experience was, “The time at Central Baptist Church on Tuesday night when the young man accepted Christ.” 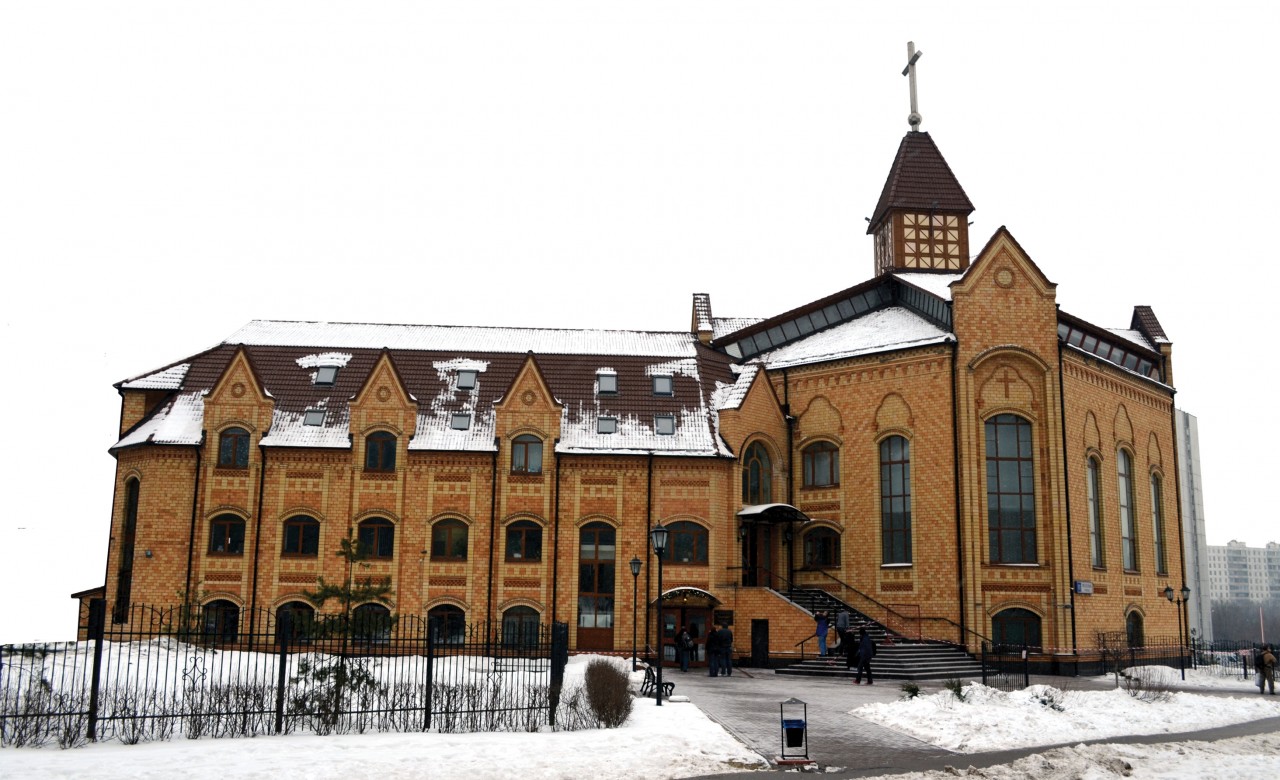 Golgotha Baptist Church in Moscow is an impressive landmark.

He also was taken aback by, “Just meeting people who are so open and willing and gracious.”

He said he felt the group made an impact for the Gospel.

“Just thinking of the day when we gave scarves to the children from Central Russia, I can’t help thinking about those scarves traveling 1,500 kilometers into the heart of Russia and the message of the Gospel being shared,” he said. “We may not know who reads them, but we know His message is being carried on and we trust His Spirit to work in their lives and produce fruit.”

Morris Neighbors, of Skiatook, Immanuel, the oldest member of the group at age 88, was awed by the scale of the Olympic Park in Adler.

“Mainly the majesty of it,” he marveled. “I had never seen such magnificent buildings and lighting. I just wonder what are they going to do with all of that when the Olympics are over. Of course, the Olympic flame was magnificent; they had done a really good job on it. It dominated the whole thing. I was very impressed with the scale of it.”

As for the group’s ministry, Neighbors said, “We have no idea how many people heard the Gospel through singing or just ministering. I was amazed how we could just stand on a street corner and start singing, and all of a sudden, there was a crowd there. They tried to sing along with us on some songs they knew, and when we got through, they clapped and smiled. I was really impressed when a couple of Russian boys jumped in front of us with a flag and tried to disrupt us and the crowd booed them down.

“I was amazed at how we were accepted here. We weren’t the ugly Americans that the world thinks we are. The fact that we were singing enjoyable songs—and I don’t know whether they knew at the moment that they were religious songs or not—but they got the message somehow.”