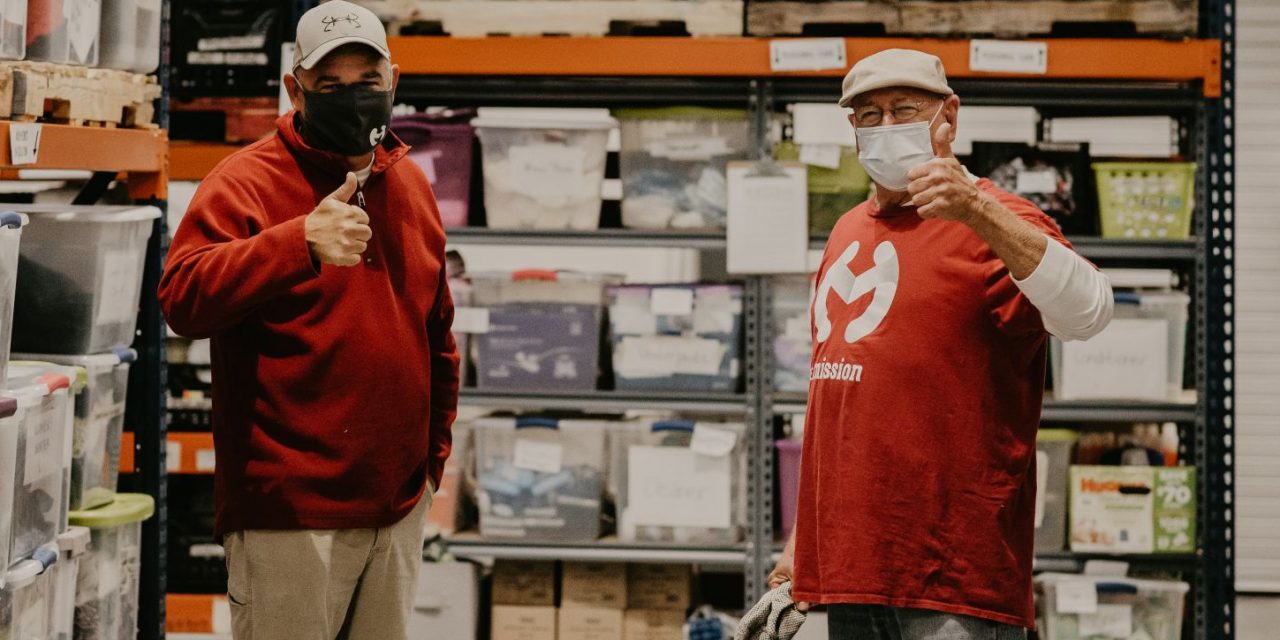 Above: David Burchette, left, and Hose Korhuniak serve in the warehouse at theMission, receiving and sorting donations and food orders.

OWASSO—An Oklahoma Baptist church is setting a high standard in caring for their community though a mission center that meets the physical and emotional needs of people as an opportunity for advancing the Gospel. 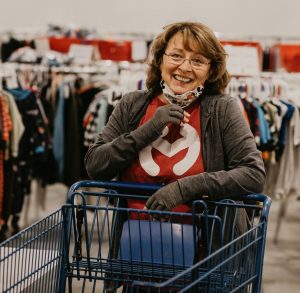 Owasso, First began the ministry 15 years ago when members of the church began taking initiatives to meet needs they identified in their community. Today the ministry has grown into one of the largest feeding and humanitarian needs ministries in the state.

Working under the name “theMission,” the ministry’s mission is stated on their website “to offer hope, relationships and support for our neighbors.” theMission is located on North Garnett Road in Owasso and continues the original vision of the church members by providing donated food, clothing, furniture and a variety of ministry services to clients.

Brennan Fulton, director of theMission, explained how the center grew from its humble beginnings.

“Originally called ‘Mission Owasso,’ the ministry started a little over 15 years ago,” Fulton said. “It began when some church members saw some needs in our community and felt a strong conviction that they needed to meet those needs through our church. Initially, they began by meeting with people in the church parking lot, providing donated items collected and distributed out of the trunks of their cars.

“Someone would hear that their friend had a need, and they would call each other and work to meet those needs,” Fulton continued. “They would use that as a platform to share the Gospel and to pray with people as a way to share the love of Christ.”

Eventually, theMission moved into a 1,200 square foot location off of Main Street in downtown Owasso. It was a storefront operation with about a third of the space dedicated to interaction with the public. There was a small office space to meet with clients, and the rest of the space served as an area for sorting and storing donations.

“They were able to expand their ability to meet needs from that location, offering more clothing items, and they recognized the need to be able to help people with food insecurity in our community,” Fulton said. “This was a help for senior adults, but also families that were struggling to make ends meet. When people would come in and get food, church volunteers would pray with them, laugh with them and joke with them and just try to build relationships and share the Gospel.”

When Chris Wall became pastor of Owasso, First in 2012, he had an even greater vision for theMission. Fulton said the center had a major surge in community outreach.

The Mission Owasso center was one of the things that first attracted Wall to become pastor of the church.

“When I heard that this church was doing community ministry, I thought, ‘Oh my goodness, I would love to be the pastor of that church,’” Wall said. “It drew me to the church. I wanted to jump in with that ministry.”

Wall had a vision to expand the ministry center, rebranding it as theMission.

“I felt we needed to take the ministry to a new level,” he said. “We bought 10 acres of land, three and a half miles northwest of our church and built theMission to be the helping arm of our church. We are now the one of largest feeding centers in northeast Oklahoma—and we are just one church! God has allowed us to serve the rural communities surrounding Owasso as well.”

The household impact of theMission in 2020, Fulton reported, stated that 2,269 households were served, representing 4,985 individuals.

People who come for help at theMission are interviewed and assessed for their needs. This helps the ministry know how to best serve the clients who come to the center. An important part of the ministry is to help people understand their spiritual need for a Savior.

“We share the Gospel with everyone who comes through theMission,” Wall said. “We sit down with them one-on-one.”

Pam, a client of theMission, explained how she was helped by the ministry.

“I had moved out on my own, after a divorce,” she said. “I could pay my bills, but I could not afford food. I got a pamphlet that listed places I could go to get help. I came to theMission. When I first walked into theMission, I was scared. I was embarrassed. I have never had to have someone help me. Everything they do for you is out of love. They made me feel not scared, that it was okay to be there to ask for help.”

As Pam continued to be served by theMission, she began to reach out to the ministry with other needs.

“I had been having some rough days,” Pam explained. “Miss Judy (a worker in the ministry) gave me a pamphlet that had Susan Cook’s name and phone number on it. I don’t know why, but I put that number in my phone.

“I had another bad day that put me into tears for two days. I contacted Susan late one Friday night because I needed someone to talk to. We texted back and forth, and that Sunday I went to church. The lady at the door (a church greeter) took me to Susan, and Miss Judy was standing there waiting on me.

“(theMission) led me back to church,” Pam continued. “That night after falling apart, I knew what was missing, and God told me to reach out to Susan. It was the best decision I could have ever made, reaching out to these ladies for support.”