Our place to serve 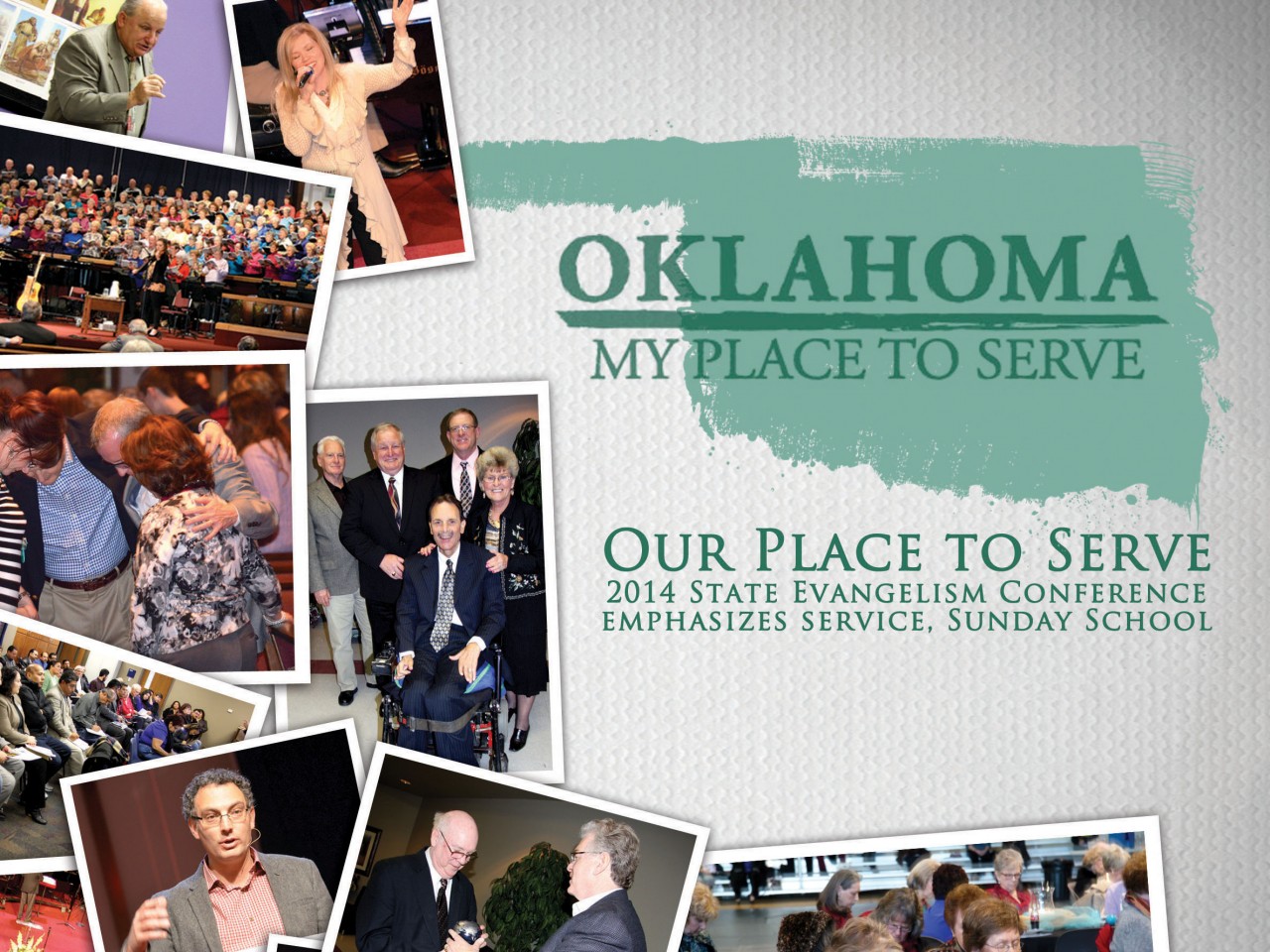 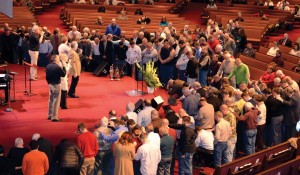 Pastors and lay people alike heard stirring sermons, beautiful music, attended ministry breakout sessions and accepted a challenge to embrace the ReConnect Sunday School initiative as a means to reach the entire state with the Gospel.

The theme of the conference was “Oklahoma: My Place to Serve,” using Mark 10:45 as a focal verse: “For even the Son of Man did not come to be served, but to serve, and to give His life as a ransom for many.” 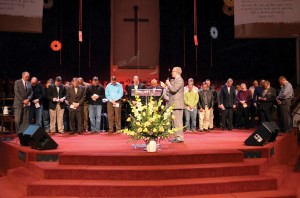 Rick Sowell, pastor of Choctaw, Choctaw Road, led off the opening general session Monday afternoon. He shared the story of how Howard Hughes, a man of extreme wealth and influence, became “unrecognizable” in his final years of life in recluse. Sowell made the comparison of Hughes’ life to the church today.

“I tell you that the Church Jesus Christ has called to be salt and light in this world… stands in danger of becoming unrecognizable if we don’t move outside the walls,” Sowell said.

Scott Reed, pastor of Cache, First, followed with a message on the importance of teaching the Word of God in church. Reed shared how churches are declining because of lack of emphasis on teaching and preaching the Bible. 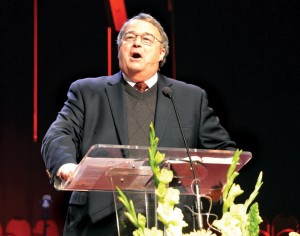 “Are we aligning our lives with the Word of God in such a way that attracts people?” said Reed. “How would your Sunday School and worship service attendances change if Christ showed up?”

Alton Fannin, senior pastor of Ardmore, First closed out the session reflecting on his 42 years of ministry. Fannin said he eventually “became a sincere workaholic” as he tried to serve God before the Lord finally told him, “I want you to be happy.”

Using Acts 16 as his text, Fannin pointed out that the Holy Spirit will direct us, if we just listen to Him, just as Paul did when he was directed to go to Macedonia and the Gospel was introduced to Europe as a result.

“God is always speaking; am I listening?

“God is leading; am I following?

“God is working; will I join Him?” 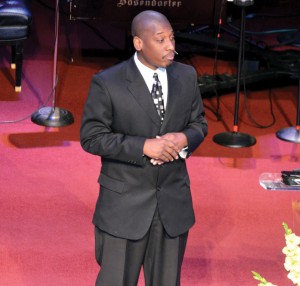 During the Monday evening session, Broken Arrow-area pastors Alex Himaya, the Church at Battle Creek and Midtown, and Nick Garland, Broken Arrow, First, shared how their churches reach out to their communities in different ways.

Himaya stressed that salvation is an event, while evangelism is a process, which is reflected in the church’s mission statement: “Glorifying God by helping all people of all ages, all the time, advance in their journey with Christ.”

Himaya said he believes God is blessing his churches’ set of core values, their mission statement, their process and their servant’s heart, in which the congregations serve the community every year through three or four special events—such as providing thousands of toys to deserving children at Christmas and backpacks for students as school starts—feeding the homeless and doing home makeovers. 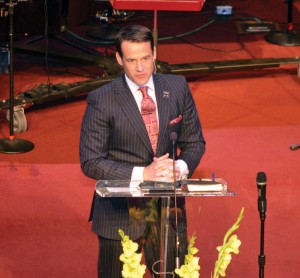 Garland, also president of the Baptist General Convention of Oklahoma, said “Sunday School is the backbone of the church. When you teach people to create a new unit, it’s the very same thing as planting a new church.”

He also spoke of the church’s global missions emphasis in eight countries with plans to go into Canada, church planting work in seven U.S. cities and restoration of fellow churches right here in Oklahoma.

K.J. Jackson, pastor of Tulsa, New Beginnings, led off the Tuesday afternoon session. A video was presented before Jackson spoke, featuring members of New Beginnings giving their testimonies. Many shared how they came from difficult backgrounds, but after they attended New Beginnings, they felt welcomed and were a part of the church. 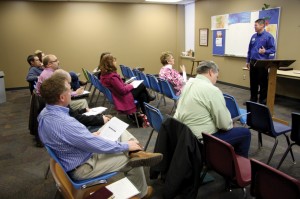 Jackson said his church was started with lost people, and he read a poem he wrote called “Empty Chair,” sharing how lost people “have fallen and can’t get up,” a phrase frequently mentioned throughout his poem. Jackson said members of his church are committed to doing two hours a month in outreach events.

“If Jesus Christ would take your job, would His schedule look like yours?” Jackson asked, challenging pastors in attendance.

Charlie Blount, pastor of El Reno, First, shared how his church’s strategy for evangelism involves members serving the El Reno community through different services, including a free dental clinic and a benevolent clothing ministry. Blount emphasized, though, that these services were not just to do good things for people, but also to spread the Gospel. 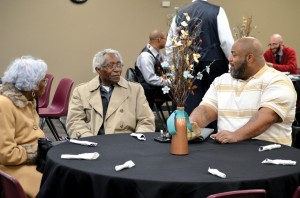 “We are called to meet needs, but we are also called to proclaim Jesus Christ to them,” he said. “If all we are doing is helping them with physical needs, but not giving them Jesus, that’s not merciful.”

“I am tickled to death that Oklahoma is ‘my place to serve’,” he said, referring to the SEC theme.

Vance’s sermon was titled “Donkey Ministry” referring to Luke 19, where Jesus told His disciples to find a donkey and bring it to Him. Vance said, “The Gospel account in Luke is not about the donkey, or even the disciples. It is all about the Lord Jesus Christ. It is time for the Church to stop just doing church and to start being the Church. It is all for His glory.” 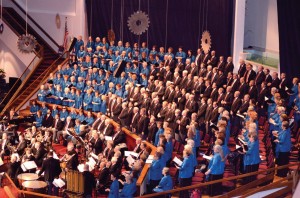 “We are about making new groups,” said Mayfield. “On Sept. 7, we are asking every church in Oklahoma to start a new group. We want to reach people through the Gospel. We are asking you to make a 10-week outreach burst in your church.”

Mayfield’s appeal was a nice set up to Blake Gideon’s sermon. The pastor of Edmond, First was the final speaker of the SEC and spoke on Acts 11, saying, “When it comes to advancing the Gospel of the Lord Jesus Christ, there is no retreat.”

“We have treated Sunday School like another ministry instead of a strategy,” said Gideon. “It is a strategy for fulfilling the vision God has given you. I am asking you to re-commit yourselves to Sunday School and seeing it as a strategy and pouring the rest of your life into it. You don’t have to try something new. Just invest yourself in what you already have and make it excellent.”