Posted on February 3, 2014
By Tiffany Zylstra 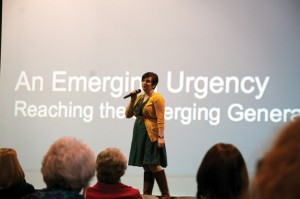 Rachel Forrest presents “An Emerging Urgency” on the desperate need to reach the Emerging Generation.

MOORE—Hundreds of women from around Oklahoma found inspiration and encouragement at the 2014 State Evangelism Conference women’s session.  This year, the women’s office leadership team explored a new format of several personalities, each with shorter times in a large group setting. The personalities were all from Oklahoma and had inspirational stories and testimonies to share.

Robin Marsh, a popular Oklahoma City news anchor, performed a dual role of emcee and personality. She reminded the women that “evangelism is not just during visitation time or on Sunday nights; it is in every conversation we have.” She then encouraged each person to look for opportunities, actually listen to what the other person is saying and then let God work through her.

Baptist General Convention of Oklahoma (BGCO) Women’s Specialist, Kelly King, convicted women to pray for lost people by name. Referencing Luke 10:2 King asked, “Do we have the eyes of someone who is in the life-saving business? How are we praying for the lost?” She then posed the question, “We talk about the importance of prayer, but how many of us have specific people who need Jesus Christ on the list?” 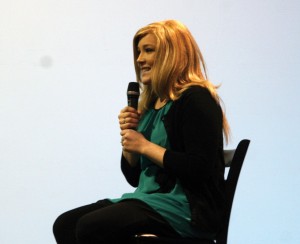 Rachel Forrest, a ministry wife and mother, spoke on reaching the Emerging Generation, people born between 1980 and 2000. “The Emerging Generation needs to hear why Christ is better than anything in the culture. This generation is white for harvest, the only thing missing is people who will reach out to a hurting, broken people to show God’s redeeming love.”

More than 20 percent of millennials identify themselves as ‘nones,’ having no affiliation with any church, denomination, or religious tradition. Forrest charged the women attending to be spiritual parents who will guide and pour into the lives of very broken young adults.

Sue Ellen Ferguson is a leader for Celebrate Recovery with a passion for collecting antique hats. She firmly believes that every opportunity with people around is the chance to share the love of Christ.  “God did not bless you with something that you don’t like to do.” Ferguson then shared of looking at inconveniences, being placed in the hospital or flying in the middle seat, into divine appointments to evangelize. She uses her love of antique hats to speak to a variety of secular groups and always works in her testimony or a Gospel presentation. 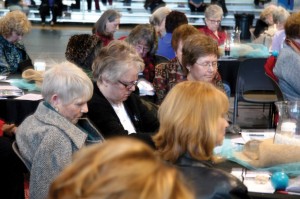 Women from around Oklahoma spend time in prayer during the Women’s Session at the State Evangelism Conference.

May 20 Moore tornado survivor Micah Moody spoke of the power of God’s grace and forgiveness. Moody and her family lost their home, located across the street from Plaza Towers Elementary school. She was one of the first people on the scene after the storm devastated the school building.  Over and over, she and her family saw God’s protection through perfectly-placed roof tops, walls collapsing as protection instead of harmful rubble.  “For me the question isn’t where was God during the storm? It is where wasn’t God?”

Moody then shared her testimony of three abortions by the age of 21. She stated “I was an atheist and quite proud of being one.” She concluded her testimony with, “I thought I became a Christian, but then it took me five years to realize that my sin was not too big for an even bigger God.” Moody encouraged women to open their arms to broken non-believers.

The time of encouragement and inspiration was capped off with special guests Andrea and Lorelei Decker. Lorelei was diagnosed with cancer two years ago. She recently emerged cancer free, and her faith has never been stronger. During her battle, she had the opportunity to be an Oklahoma City Thunder basketball coach and retains those relationships to this day. Thunder head coach Scott Brooks sent a surprise message telling Lorelei how proud he is of her. 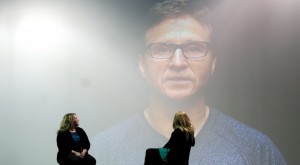 Andrea Decker shared how her prayer for her daughter was to see people with spiritual eyes. She then said that “everyone has a story.  How you receive it and respond changes everything.”

Throughout the session, the women attending received resources and door prizes. King was excited to share that a video of each speaker will be available online at no charge. “We want the women of Oklahoma to be inspired to share the love of Christ with everyone they meet.”

To view the messages and other resources, visit www.bgcowomen.org.