OU quarterback gets a hand in ministry 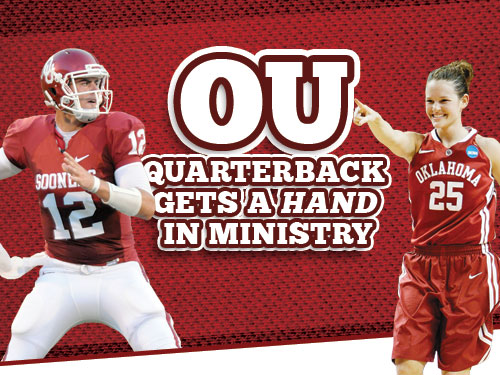 NORMAN—Landry Jones and Whitney Hand, who were married July 6 in Fort Worth, Texas, make a powerful sports couple. But more importantly, the University of Oklahoma quarterback and a guard for the OU women’s basketball team, want to be a strong testimony for what the Lord is doing in their lives.

“We want to serve the Lord together,” said Hand. “We think we are stronger together than we are apart. We believe in what each other does and stands for.”

Jones and Hand both come from strong Christian families. Jones grew up and was baptized at First Church in Artesia, N.M., where he was  a three-year starter at quarterback, amassing 12,379 yards and 93 touchdowns—and was named New Mexico player of the year.

Rick Sullivan, pastor of Artesia, First, said Jones and his family were very active in the church, always there on Sundays and Wednesdays.

“Football was the driving force for Landry, but he was a kid who was always in the right place doing the right things,” Sullivan said. “He returned to speak in our church after the season a couple of years ago, preaching on Sunday morning.”

Sullivan said it was obvious to him that Jones loves preaching.

“He definitely has a call,” observed Sullivan. “I don’t know if he’s defined that call yet. God has given him football skills, and I’m sure he wants to take that as far as possible, realizing it gives him a platform to be God’s person wherever he is.”

Hand, who also grew up in a Baptist church in the Fort Worth area, was saved when she was 7.

“I went to a Christian school my whole life, and transferred to Liberty Christian School my junior year in high school,” said Hand. “That’s when I really began to serve the Lord.”

Jones said while he grew up in a Christian family with great parents in a relatively small town, like many teenagers, he had a sense of invincibility.

“While there were certain things I was doing that I realized were maybe leading me astray, I really didn’t truly feel a void in my live until I arrived at the University of Oklahoma,” Jones said.

He graduated from high school early so he could enroll early at OU in 2008.

“In high school, I was surrounded by a pretty close-knit community,” he acknowledged. “When I arrived at OU, it was a lonely experience. There aren’t a lot of students who arrive at the semester break, so I really felt lonely for the first time in my life. I eventually came to the conclusion that there was only one true thing that could help me feel fulfilled, and that was my faith.”

Jones commented on the video “I Am Second” that his identity was wrapped up in football, and when he came to OU and didn’t play immediately, he became depressed until God spoke to him and he realized he wasn’t Landry Jones, the quarterback, but he was Landry Jones, a son of God.

Hand may have had a “hand” in that realization as the two became friends early in their college careers.

“Landry and I met our freshman year,” Hand revealed. “We were living in the same dorm (building), had the same friend group, were in the same circles, became really close and started dating a few months later.”

Jones admits that meeting Hand and witnessing her faith and her great inner spirit further awakened him spiritually.

“In many respects, my life really became more fully enriched here at OU, and I have grown in so many aspects of my life,” Jones said.

Chris Bennett, the couple’s pastor at Antioch Community Church in Norman, confirms that Jones’ identity is not in being the OU quarterback.

“His identity is absolutely identified as being a son of God,” Bennett said. “That’s what he lives for. Landry and Whitney are both very intentional at investing in their teammates. They have a lot of favor, not just because of their athleticism, but because of the consistency of their lives. They practice what they preach.”

Bennett added that it has been fun to see the way God has used them individually on their teams, and now to see them come together so powerfully.

“And it’s going to be even more powerful as Landry goes to the NFL,” he commented.

Bennett said for the last three years, he and Jones have met weekly to go through the Word together and pray for his teammates.

“Landry also meets with several guys on a weekly basis to invest in them,” Bennett revealed. “He’s probably led eight to 10 of his teammates to the Lord in the last three years. And he tries to disciple them, sitting down and going through the Word with them and praying with them. He’s very faithful to those kinds of things.”

Bennett, who officiated at the couple’s wedding, said Jones’ dad, Kevin, told him that in all the years Landry has played football, he has never called him after a game and told him how many yards or how many touchdowns he threw for.

“He said, ‘He’ll tell me about a teammate he led to the Lord or what God is doing on that team,’” related Bennett.

Bennett noted that the couple’s personalities are different.

“Landry is very laid back, and Whitney is much more vocal as a leader, but together, it is very powerful,” he noted. “They are both leaders in their own ways.”

Hand, Big 12 Freshman of the Year, averaging 9.2 points per game, went on a mission trip with the OU women’s basketball team to Haiti her sophomore year. The next year, Jones and several members of the OU football team joined the group going to the earthquake devastated country.

“The mission trip was affirming,” said Hand. “It affirmed what we were trying to do in our ministry together as a couple.”

Jones, who is named after legendary Dallas Cowboy coach Tom Landry, has said he will be in the ministry someday, whether it’s as a pastor or a chaplain.

His former youth director in Artesia, Chris Fields, now youth minister at Del City, First Southern, said Jones was involved in a new college ministry at First Southern when he first came to OU. His parents were also members of First Southern, but now attend Antioch Church with their son and his wife. Fields added, in talking with Jones, he believes he has been called to be a pastor.

Hand says she also feels she’s been called into the ministry in some way.

“I’m not really sure what that looks like right now, but Landry and I are both very involved in our community and our church.”

Jones, who has a chance to become OU’s winningest quarterback, breaking numerous passing records, will almost certainly be drafted into the National Football League.

He said when he tried to make the decision on whether he would leave or stay for his senior season at OU, he went back and forth.

“After the bowl game (Insight Bowl, OU-31, Iowa, 14), I prayed about it and felt that the Lord wanted me to come back and play my senior year—just to be a senior and get to be with this team one more year and go after a national championship,” Jones disclosed.

Hand, who said she always had a goal of playing college ball, indicated she is taking playing professionally as it comes.

“I wouldn’t say that’s my end goal, but I would do it if I get the opportunity,” said the health and physical science major, who is currently working on her master’s degree at OU.

“I’m probably going to continue going to school wherever Landry goes,” she said. “Since we’re not sure where that is going to be, it’s not easy to say what I’m going to do, but right now, I would say it will be something along the lines of physical therapy.”

“I know Landry loves the Lord and wants to do what God has called him to do,” said Fields. “God is using him in the lives of those football players. He’s more than just a quarterback, he’s a spiritual leader of the team.”

In a recent interview, Jones said whether he’s a pastor or a chaplain, whatever God calls him to, he’s going to do it.

“But right now,” he said, “my job is as leader of the OU football team.”

Jones added that he knows God has called him to make an impact in the NFL for a season of time.

“I have a heart to see players come into an authentic, personal relationship with Jesus and to make disciples of them,” he said. “After football, I don’t know exactly what it will look like, but I am excited to see God’s plans unfold for me and Whitney in some form of ministry together.”

Hand, who also will be playing her senior season this year, said she believes the platform God has given her and her new husband through sports is going to be huge.

“I don’t know if that means a job per se in ministry,” she said. “It may in the future, but right now I think it means giving God positive attention in our culture and entertainment society where it is not that prevalent. It is giving people examples of what loving God looks like and what that kind of lifestyle looks like.”

Jones said his faith takes on more importance as he looks to the future.

“I can’t imagine facing the challenges, opportunities and obstacles that I’ll be confronted with without having the comfort and peace of the Lord and my loving wife Whitney at my side.”