To begin the evening, representatives from Native American churches across the state carried ornate, hand-made banners in a processional, while a special dramatic presentation of the Lord’s Prayer in a Native tongue was recited as dozens of women of all ages wearing full Native regalia choreographed the prayer in sign language. 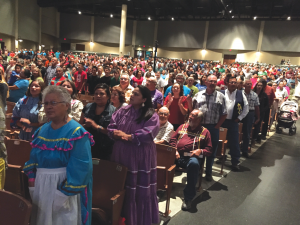 Victor Cope, executive director of the Indian Falls Creek Board of Directors, praised God for the beautiful presentation, then welcomed everyone to the occasion.

Following Cope’s comments, a special time of prayer was observed, followed by times of worship through music, led by musicians from the Indian Bible College in Flagstaff, Ariz. Throughout the IFC events, people from various tribes led in song.

On Sunday evening, representatives from the Pawnee, Potawatomi and Navajo sang in their Native tongues on the platform.

Then, Cope welcomed to the podium Emerson Falls, who serves as Baptist General Convention of Oklahoma (BGCO) Native American Ministries specialist. Falls addressed the gathering, saying, “Oklahoma is uniquely positioned to be a leader in Native American ministries.”

“Baptists are blessed to have Dr. Jordan. He has been the biggest supporter of Indian Falls Creek, and at a time when budgets were shrinking and Southern Baptist work (at the North American Mission Board) was changing, he established a full-time staff position dedicated to Native work at the BGCO,” Falls continued.

Jordan then addressed the gathering on Sunday evening. “Being part of this event is one of the highlights of my life. We want this to continue to be the largest gathering of Native American Christians in the world, one that continues to share the Gospel and call people to ministry,” he said. “Isn’t it amazing to think that one of the founders of Falls Creek, J.B. Rounds, also led in establishing Indian Falls Creek 70 years ago?”

According to the IFC website, “Falls Creek Baptist Indian Assembly began in 1947 with an attendance of 333… and is (now) widely anticipated each year becoming a tradition for many 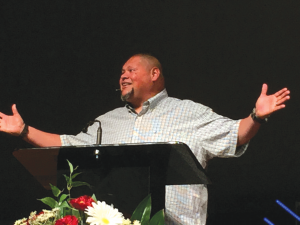 Mike Keahbone served as camp pastor at the 2017 IFC.

churches and their members. Hosting campers who represent between 25-40 tribes and (more than) 250 churches each year as well as non-Native people, Indian Falls Creek could well be the largest Native Christian encampment in North America.”

Activities for the 2017 IFC were offered for all ages, including a youth, young adults and children’s church track, as well as Vacation Bible School under the direction of Moundsville, Ala., Indian Mounds.

From the watermelon eating contest to the blood drive to intensive Bible studies, Indian Falls Creek is a one-of-a-kind family camp that uplifts Christ and offers memorable experiences to all who take part.

Keahbone grew up in the small town of Elgin, and his father was a full-blood Cherokee, and his mother was Comanche and Kiowa. Though he comes from a proud Native heritage, his family was ravaged by alcohol and drug addiction. As a teenage mom, Keahbone’s mother was in and out of his life and eventually passed away at the age of 40 due to an alcohol-related illness. Keahbone’s father was completely absent from his life.

He shared about his background durimg the opening ceremonies. “Through all of the turmoil, pain and abandonment, there was hope,” he said. “God put people in my life that loved me unconditionally and modeled the love of Jesus Christ. It was that love and example that would lead me to give my life to the Lord on Nov. 1, 1990.”

Preaching out of Romans 12, Keahbone underscored the many spiritual and social issues troubling Native Americans today, including addiction. Pointing to Jesus Christ as the solution, Keahbone presented the Gospel and said that some who are believers need to make Christ Lord over their daily lives.

From the first note to the final invitation, the opening ceremony of the 70th IFC was inspiring and memorable to all who took part.

“This was truly a night to remember and one that God has used for his glory,” said Cope.

For more information about the 2017 IFC, visit www.indianfallscreek.net. Look for additional coverage at www.baptistmessenger.com.