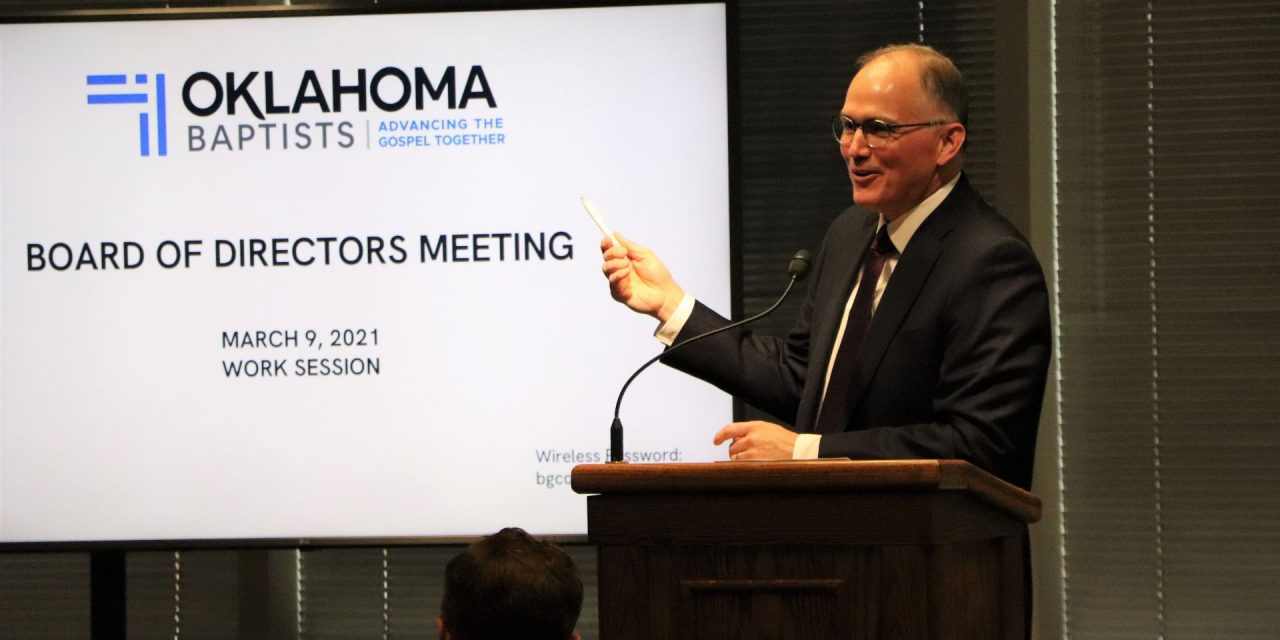 Members of Oklahoma Baptists’ board of directors met on Tuesday, March 9, at the Baptist Building in Oklahoma City to consider key business and approve recommendations.

Immediately after the board met exactly one year ago, the global pandemic was declared, creating unprecedented challenges for churches and ministries across the state. In the face of such challenges from that time to this meeting, though, Oklahoma Baptist leaders spoke of God’s faithfulness and provision. 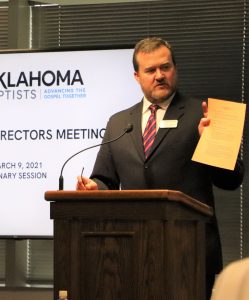 Included in the March 9 meeting were ministry reports, committee meetings, times of song and prayer, as well as the approval of key action items, including the authorization to invest dollars into the Baptist College Ministry (BCM) building project at Southeastern Oklahoma State University (SOSU), a strategic point of Gospel advance in the state.

Key progress for BCM at SOSU in Durant

Cris Lowery, BCM state director, spoke to the board about the Gospel work happening on campuses across Oklahoma. Lowery shared a report from the University of Oklahoma (OU) BCM, that its new building, which has been in use for two years, is drawing students “beyond what we could have even hoped or imagined.” 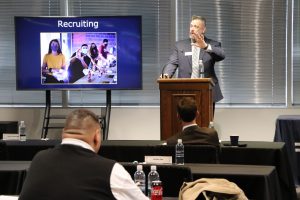 “On any given day,” Lowery said, “students at OU are coming to the building, just to hang out, study and have Gospel conversations.” At least 35 students connected to the OU BCM have made professions of faith in Christ since August 2020 alone.

Lowery talked about the strategic need for a new BCM building at SOSU in Durant, a ministry that has been operating without a building for some four years.

“BCM is just like every other ministry now,” Lowery said. “It’s full of frustration but incredibly fruitful. That’s been true even in this building process. We started this fundraising process a while back, but it did not work. So we stopped and readjusted. God helped us rearrange some things, and great people like (board member) Gary McNeill helped. People are responding,”

Joe Ligon, senior associate executive director for Oklahoma Baptists, reported that the aggressive fundraising effort is underway to fund the building project. The board was able to view an architectural rendering of the building as well as floorplans. Then board members authorized to give $250,000 from unspent convention reserves to the BCM building project at Southeastern.

“Sometimes people may wonder, ‘should we invest this much in buildings?’” Lowery added. “Yet what we saw at OU confirmed the importance of having a building and having a place of ministry; it exceeded our expectations.

“We have lost some ministry opportunities at Southeastern, such as noonday events that also give churches in the area a chance to plug into campus ministry,” Lowery continued. “We don’t have a place to call home or a place for students. This effort will accomplish that. This building is located on a great part of campus, where students are.”

For more information about the campaign, contact Lowery at clowery@oklahomabaptists.org. 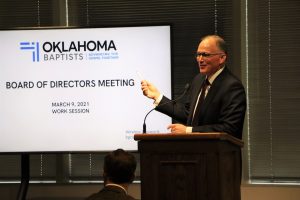 During his executive director’s remarks in the board’s plenary session, Oklahoma Baptists executive director-treasurer Hance Dilbeck shared a word from 1 Corinthians 16, discussing how the Gospel advanced during the early church days.

“It is easy for us to imagine that we are living in unprecedented times,” Dilbeck said. “However, in some ways, we are entering a world that is more, not less, similar to the Apostolic period.”

“The Gospel business is a relationship business,” he said. “At the end of the day, we must recognize that our institutions, our denomination, is no stronger than our relationships.

“We also learn from Paul that Gospel ministry involves money,” Dilbeck continued. “When we spend time reporting on Cooperative Program revenue and administrative processes, we have a tendency to imagine that we have somehow distorted or diminished Apostolic Christianity. Yet Paul was always raising money and talking about money. It is a key part of our fellowship. When we give faithfully amid economic challenge, it is an opportunity to glorify God in our giving.

“Finally, this concept of grit is essential for Gospel advance. Grit means ‘firmness of character and spirit in face of opposition.’ Paul said that they had adversaries. We sometimes act surprised that, in our day, we face opposition. But this is nothing new. Many of us seem to be too afraid. Indeed some of our divisiveness is born of anxiousness. But the church was born in this climate; and the church has tended to thrive in this climate.” 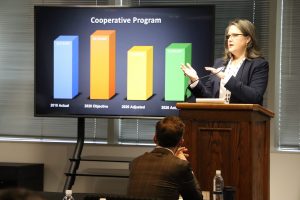 Leslie Osborn, the new Chief Financial Officer for Oklahoma Baptists, gave a financial update, which included reviewing finances from 2020. Osborn and Dilbeck discussed that when the challenges of 2020 became apparent, Oklahoma Baptist leaders took decisive action in ensuring financially wise decisions were made.

At the conclusion of the first financial quarter in 2020, Cooperative Program (CP) giving was below budget by 15 percent. This, combined with the loss of Falls Creek Conference Center activity in 2020, had cut 2020 revenue by more than 30 percent, or more than $8 million.

The Board Finance Committee’s previous action of adopting an adjusted Financial Plan “for the last half of 2020 helped manage our way through 2020 as responsible stewards,” Dilbeck said.

The adjusted Financial Plan included severe spending cuts, which were initiated in March 2020, and, as a last resort, personnel reductions. The adjusted Financial Plan included the elimination of 17 full-time jobs, which represents 13 percent of convention staff. The staff reduction plans were previously approved by the Board’s Executive Committee, and action was taken in early June 2020.

The Convention’s original CP objective of $26.1 million was adjusted to $22,185,000 (or 15 percent).  Oklahoma Baptists continued to give faithfully amid challenging times toward the cooperative missions work, and at the conclusion of 2020, had given $22,323,494.

“The 2020 challenges demanded flexibility, creativity, effort and endurance from all Oklahoma Baptists,” Dilbeck said. “Because of the generosity of Oklahoma Baptists and wise actions taken by our board, we were able to maintain financial stability in 2020. God faithfully provided through His people.”

Dilbeck added, “Even while difficult budget adjustments had to be made in 2020 and 2021, the Gospel advance was unhindered. The impactful ministry that God is doing among Oklahoma Baptists continued across the state, and the mission of ‘we encourage one another to advance the Gospel’ stayed in focus.”

During the plenary session, board members approved that the 2022 Cooperative Program allocation be distributed 43 percent to the Southern Baptist Convention; 42 percent to Oklahoma Baptists; 15 percent to Convention Affiliates, which is in keeping with the current distribution.

In addition, board members met with their various committees. These included: Church Resources, Communications/Cooperative Program (CP), Finance Committee and Support Services Committee. The board’s Executive Committee had convened the day prior for key business.

Board members also approved other recommendations, including the following:

—That Chris Ruwaldt, pastor of Alva, First, be elected to complete the three-year unexpired term of Shawn Caldwell on the Oklahoma Baptists’ Board of Directors;

The next scheduled meeting of the board is May 25 at the Baptist Building.