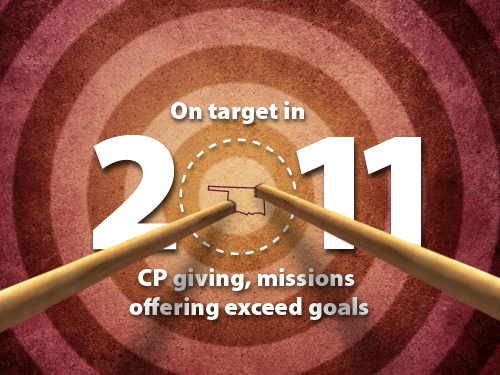 Amid the backdrop of down economic times and decreases in charitable giving on a national level, Oklahoma Baptists exceeded its two most important financial goals in 2011.

“We are thrilled that the Lord has provided so abundantly,” said Anthony L. Jordan, executive director-treasurer for the Baptist General Convention of Oklahoma.

“In Oklahoma Baptist churches Cooperative Program giving, we experienced consecutive down years in 2009 and 2010. That streak has been snapped, as we exceeded our 2011 goal by more than $1 million,” he said. “Not since the 1930s have we seen a trend reversal like this.”

“The BGCO is so grateful for the generosity of Oklahoma Baptists in 2011 as we experienced a recovery in giving to CP and the SMO offering with the second highest amounts ever,” said Kerry Russell, the BGCO’s chief financial officer.

“While we rejoice, we are reminded that almost half of our associations experienced giving that was less than the prior year,” he added. “The national economic crisis in 2008 and 2009 set back CP giving by at least four years, but we anticipate improvement as we enter an election year filled with national and global economic challenges.”

Oklahoma, compared to other states, was unique in the upward trend of CP giving. Oklahoma was in a minority of states that saw an increase in its CP giving.

The increased CP giving in Oklahoma did not detract from the Oklahoma State Missions Offering.

In 2011, state leaders had set an ambitious goal of $1 million for the missions offering, which supports more than 20 vital ministries in the state. As of Jan. 12, $1.018 million had been given.

“It is a blessing to see Oklahoma Baptists catch a vision of what we can do together and answer the call to do missions in Oklahoma,” said Randall Adams, BGCO Church Outreach Team leader. Adams’ team oversees the promotion of the Oklahoma State Missions Offering.

The BGCO Finance Team, which handles all of the accounting of the giving, has studied the positive implications of the 2011 goals being met.

“While we are rejoicing in this good news, we recognize that we are still making up ground that was lost in the downturn,” added Jordan. “Nevertheless, we are grateful and feel blessed beyond measure. These dollars translate into actual ministry touching actual lives.”