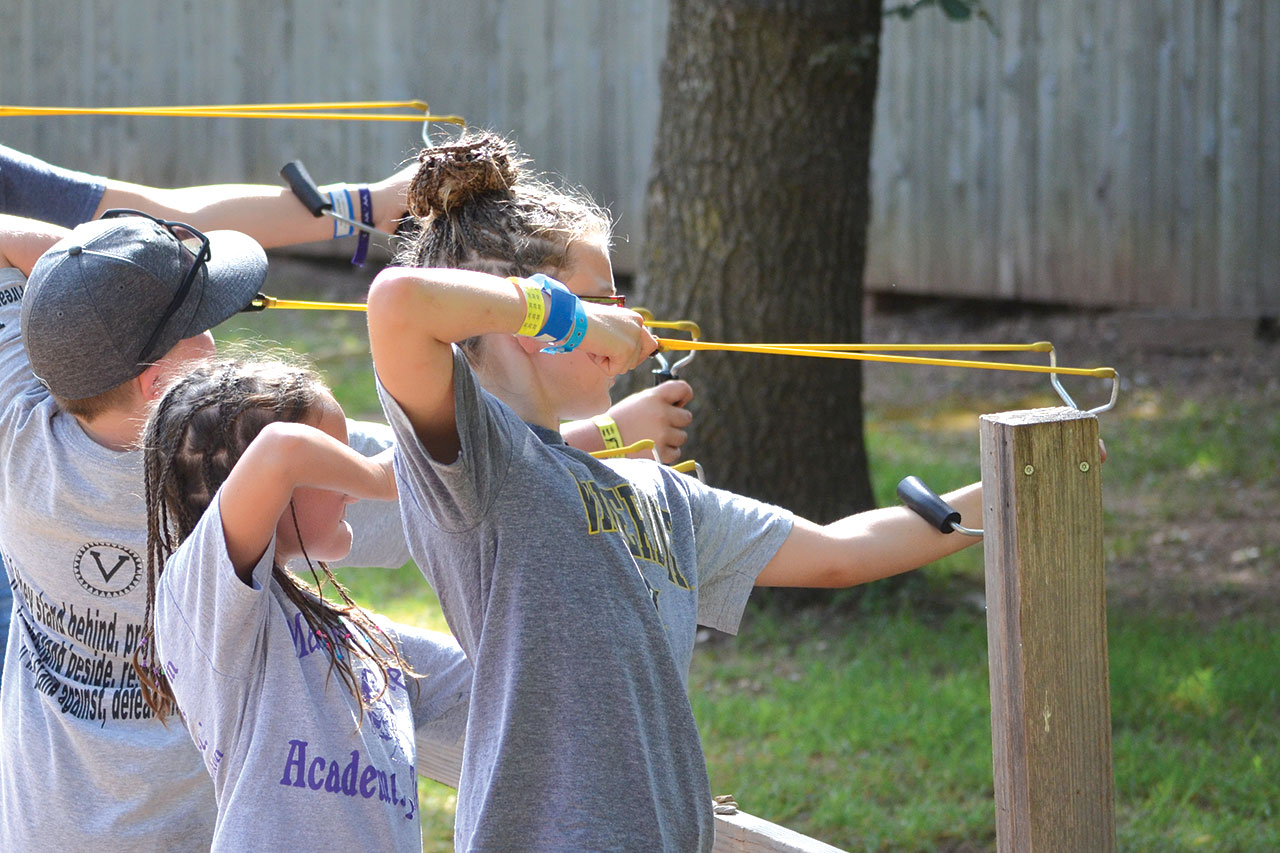 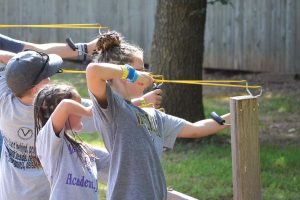 Archery and slingshots are two of the target sports CrossTimbers campers experience.
[Photo by Chris Doyle]

DAVIS—It is true. Spiritual decisions are made by campers at different locations at CrossTimbers Children’s Mission Adventure Camp. According to Camp Program Director Charlie Gatton, 30-40 percent of decisions are made outside of the evening worship services, including the camp’s target sports.

All CrossTimbers campers, 3rd-6th grade, participate in target sports during each four-day session. They rotate through the different sports, then after completing the rotation, CrossTimbers staff members gather the campers to give a spiritual application applied to the target sports.

“With the BB guns, they talk about how they are missing the target,” Gatton said. “Archery is really a simple application because it is ‘sin’ when you miss the mark.”

Staff members like Stormi Wilson and Brett Oliver share about Jesus paying the penalty for sin, overcoming the failures of “missing the mark” in daily living. 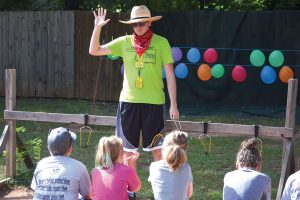 Brett Oliver gives instructions to CrossTimbers campers about shooting a slingshot. Oliver also uses an analogy of a rock and a slingshot as an application to share the Gospel
[Photo by Chris Doyle]

“We talk about hitting the bullseye, hitting the target before us,” said Wilson, who is in her second summer of working at CrossTimbers. “We use that as an opportunity to tell that, with God, we can’t really hit the target unless He’s there to help us. We have to make a decision for God to come into our heart. With using our area (target sports) they get to see a visual of it, and it becomes clear to them.”

Oliver oversees the slingshot section of target sports. He makes the application using a rock that a camper would fling with a slingshot.

“What I relate it to is we’re like the rocks,” Oliver said. “On your own, all by yourself, it doesn’t do anything. But suddenly, when teamed up with the slingshot, things change. You’ve got a new power you didn’t have before.

“If we’re the rock, then God is the slingshot, and we’re open to whole new opportunities we’ve never dreamed of. We tie that back to Scripture like John 15:5, ‘I am the vine; you are the branches. If you remain in me and I in you, you will bear much fruit; apart from me you can do nothing.’”

Gatton spoke highly of all CrossTimbers summer staff members, regarding their willingness, even eagerness, to share the Gospel with campers.

“Our staff is expectant that God is going to move,” he said, “and the Gospel they share is never done in vain. It always has fruit. But our staff, they are so fired up about sharing the Gospel. They will take advantage of every opportunity they get.”

And this applies to all activities during camp, not just target sports. But how do they record the decisions made beyond the invitation times after the worship services?

“We train the sponsors and the staff to use a response card that the BGCO (Baptist General Convention of Oklahoma) puts out,” Gatton said. “It has a tear-off part, so the kids get half to share, ‘I’ve made this decision’ with the date on it. 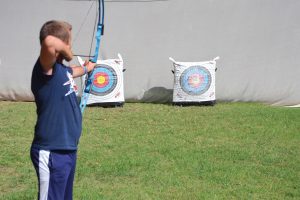 Archery and slingshots are two of the target sports CrossTimbers campers experience.
[Photo by Chris Doyle]

The response cards are turned in to the camp office, and Gatton said they give each church group a packet of all the decisions that were made by their respective campers that session. “We want (the churches) to follow up with (the campers) as soon as they get home,” he said.

Gatton said they celebrate in staff meetings every day the kids who have made decisions. He mentioned that some staff members were hesitant to share before camp started this summer, but it did not take long for confidence to grow among the staff.

This also carried over to many church sponsors. “I had one senior adult lady who was a sponsor who got to lead a kid to Christ,” Gatton shared, “and she looked at me and said, ‘It’s been a really long time since I’ve led somebody to Christ.’”

Gatton said a dad led his twin boys to make professions of faith in Christ. Many parents, he said, have the opportunity to lead their kids to Christ.
“I think that’s a tremendous opportunity when parents can come with their kids, invest in their kids, and since they are away from all the other stuff, this is just the place where they are able to freely commit,” he said.

The Baptist Messenger will run a camp wrap-up story in a future edition, giving a report of the many decisions that have been made during each session at CrossTimbers.
“There’s been many decisions made, and it’s great to see. It’s fantastic,” Oliver said.