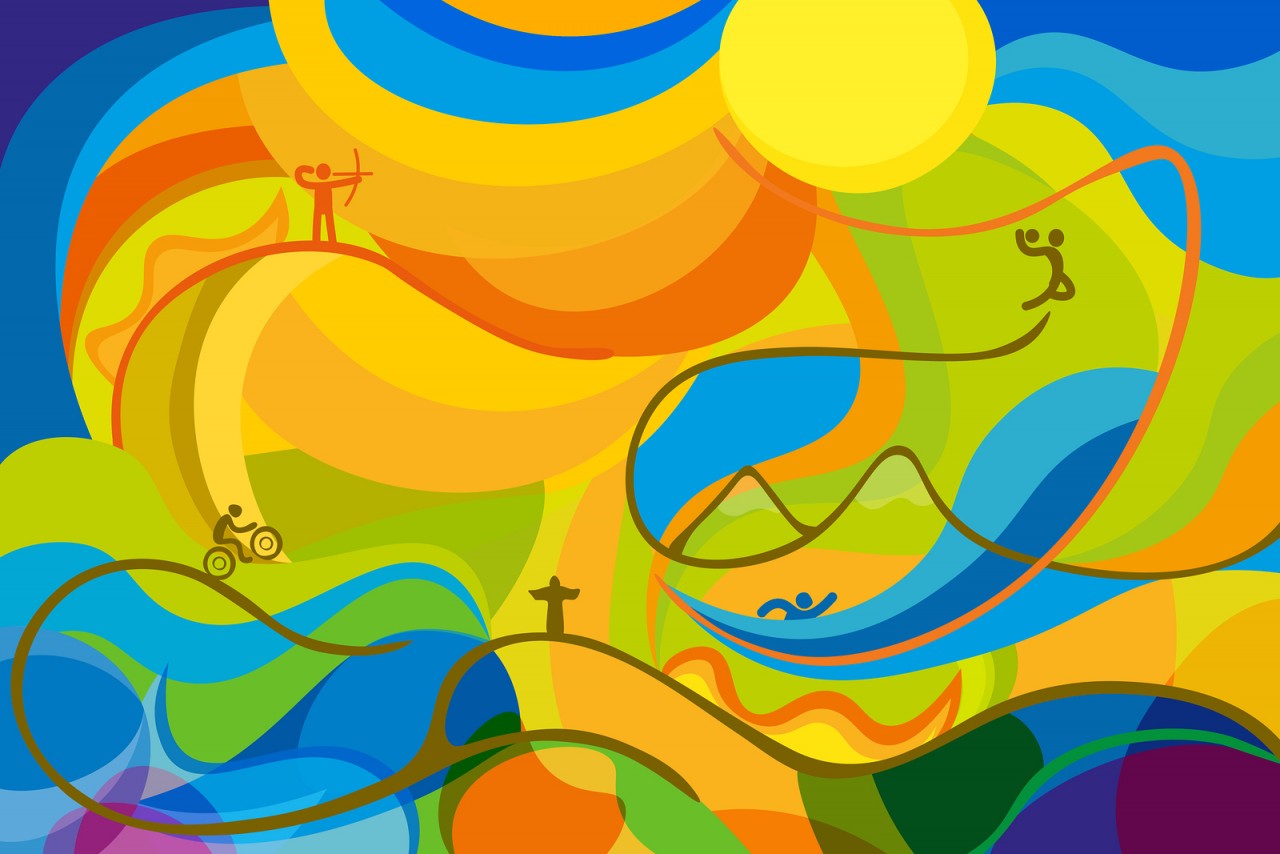 RIO DE JANEIRO (BP) — Will Claye’s journey to the Rio Olympics began with heartbreak. He thought he had qualified in the long jump during the Olympic team trials in July. He even took a victory lap.

But he was wrong. 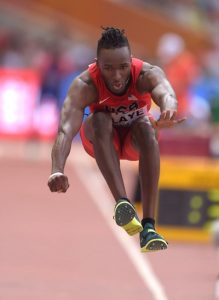 “It’s good to excel in sports,” says Olympic triple jumper Will Claye, “but at the end of the day, it’s about pleasing God, and making sure that you are doing right by Him.” Photo courtesy of Image of Sport

Claye medaled in both the long jump and the triple jump in the 2012 Olympics in London, the first athlete to do that in 80 years. This year, though, the triple jump will be his only opportunity to add to his Olympic medal collection.

He placed third in the long jump in the U.S. Olympic team trials in July, with two jumps that surpassed the minimum Olympic qualifying distance. That’s normally good enough to make the team.

But the two jumps meeting the Olympic qualifying distance were deemed to be wind-aided. His best effort without that was not quite good enough — one centimeter short of the necessary standard.

After dealing with the disappointment, Claye had to regroup and prepare for the triple jump trials (his better event), which he won and which sent him to Rio.

“I went into the triple jump with a clear mind just because I believed that there was something bigger that God had going on for me,” he said. “I think it was meant to happen like that, for me to just focus on one event this year.”

Claye grew up in a Christian home, with a mother he calls “the prayer warrior,” but it wasn’t until he was about ready to leave for college when he became a believer. He credits his older brother with sitting him down and explaining the Gospel to him.

“Are you ready to give your life to the Lord? Seriously do that?” his brother asked.

Claye said yes, and the two spent the night in prayer.

At the University of Oklahoma, where Claye began college (he later transferred to Florida), one of his teammates, D’Andre Fisher, was a committed Christian, and he had a strong influence on Claye’s life.

“He was one of the older guys on the team, so he began to take me to church and to Bible study,” Claye said. “Just hanging out with him, he always kept me accountable for my actions and things that I was doing. He made sure that I was on point. That was something that really, really put me in the right space with the Lord.”

His Christian journey has been one of steady growth since then. He says his mom helps with that, sending him Bible verses and words of encouragement daily and reminding him of what his purpose in life is. As an elite athlete, Claye said that purpose is to use the gifts God has given him to their fullest potential.

“Some people, I feel like, don’t even use their gifts in the right way,” he said. “I think I have a choice. God gave me this gift and I can use it the right way or the wrong way. The right way is to go out there and to glorify His name in all that I do.”

He also tries to keep in mind that life as an athlete is fleeting, and one day he’ll move on to something else. The most important thing he will have done in his career on the track is to make a difference for the Lord.

“It’s good to excel in sports, but at the end of the day, it’s about pleasing God, and making sure that you are doing right by Him, not just for earthly possessions or things like that, but to go to heaven,” Claye said. “Track and field and all the blessings that I’ve gotten on earth can be gone tomorrow.”

Claye finished second in the Group A triple jump qualifying rounds this morning. The finals will be on Tuesday.

RIO DE JANEIRO (BP) — Christa Dietzen comes by the “Mom” nickname her teammates have given her naturally. She’s the oldest in her extended family, and she’s one of the oldest players on the U.S. women’s Olympic volleyball team. 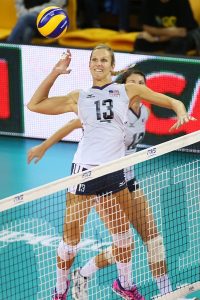 For Dietzen, the captain of the U.S. team in Rio, her interest in caring for those around her comes not just from any mothering instincts she might have, but from what she believes is required of her as a Christian.

“What does it look like to be a Christian athlete?” Dietzen asked. “I think the first piece for me is, how do you love your teammates?”

A native of Pennsylvania, Dietzen says the answer to that question is in getting to know them. She and her husband regularly have teammates over to dinner — especially younger and newer players on the U.S. national team.

Dietzen wants to know her teammates, their families and their backgrounds — what excites them and what scares them. Doing that helps her minister to them and love them well.

A third element in her role as a Christian athlete is in how she conducts herself.

“Always knowing that you have eyes watching you,” Dietzen told Baptist Press, “from what you’re saying to people, how you carry yourself on and off the court, what you’re posting on social media and how you treat others.”

Her outlook on her sport and how she interacts with her teammates has changed considerably in recent years, since Dietzen became a Christian. Though she grew up in a home where she went to church on Sundays and had a family built upon Christian values, Dietzen said she didn’t have a relationship with God.

“I actually taught Sunday school in college, but all the same, I didn’t know what a relationship with God looked like,” she said.

After finishing her first professional season in China, she began attending some Fellowship of Christian Athletes events in southern California. She was volunteering at one such event where various athletes were sharing their testimonies when a pastor gave an invitation, asking anyone who wanted to give his or her life to Christ to stand up.

“I was in the back row, and what I now know as the Holy Spirit tried to throw me off my chair to stand up,” Dietzen recalled.

She resisted, thinking that since she was a volunteer, she already should have made that decision, even though she didn’t know what it meant.

While she did not become a Christian that night, the Lord kept working in her heart. A few weeks later, in June 2010, Dietzen said, she committed her life to Christ.

She and her husband are part of Rock Harbor Orange church in Orange, Calif. Though Dietzen travels a lot and doesn’t get to attend there regularly, she said she’s looking forward to being more plugged in there when her volleyball career is over.

Dietzen expected in Rio to spend her time in the Olympic village interacting with athletes from all over the world.

“I really enjoyed that in 2012, having those Bible studies, and having those spiritual connections off the court, too,” she said.

RIO DE JANEIRO (BP) — Nathan Schrimsher will fulfill a dream when he competes in the modern pentathlon event at the Olympics. He’s been working toward this goal for years, and his training and journey to the pinnacle of his athletic achievement has been a family affair. 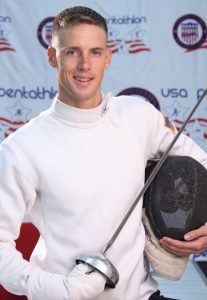 That’s why, despite the excitement, the experience will be mingled with sorrow. Schrimsher’s dad Keith passed away unexpectedly last year, and he’s the one who will be on Schrimsher’s mind during the competition.

“The Lord gives and takes away, and that was the day he took away,” Schrimsher said of his father’s death. “Nothing is guaranteed except for our faith in the Lord.”

Schrimsher owes a lot to his dad, who was described in his obituary as “a believer and follower of Jesus Christ. … His faith assures that he is no longer suffering the trials of this world, but is rejoicing in the arms of his Lord and Savior.” The Christian home that Keith established and the commitment to always having his family in church led to Schrimsher’s conversion as a child.

His dad was also actively involved in Schrimsher’s training as an athlete. Modern pentathlon consists of fencing, shooting, swimming, horse riding and cross country running. That might sound like an odd combination of events, but the sport is based on the skills needed by a 19th century cavalry officer.

“He’d have to be able to ride a horse that he’s never met before, have to be able to cross land or water, running or swimming, then be able to defend himself with a sword and gun and still deliver the message that his commander gave him to cross enemy lines to the next person in charge,” Schrimsher said.

Growing up in Roswell, New Mexico, Schrimsher and his brother Lucas played traditional sports like soccer and baseball for a time, but gradually they stepped away from competing. After a period of idleness, their parents insisted that they find an outlet for their energy. The Schrimshers got Nathan and Lucas involved in a swim team locally that was coached by Jan Olesinski, a pentathlete from Poland who competed in the Olympics in the 1980s.

After a few months, Olesinski asked the Schrimshers if they’d like to try the other pentathlon events as well. Schrimsher had grown up on a ranch and been around horses and guns his entire life, so the pentathlon events were a natural fit. What initially began as a summer activity led to youth competitions and greater involvement in the sport. Nathan was the first U.S. athlete in any sport to qualify for the 2016 Olympics earlier this year.

Schrimsher’s competition begins on Thursday (Aug. 18). Whatever the outcome, he knows he’ll miss sharing the joy with his dad. He said he’d gladly give the Olympics away if it meant having more time with his father. But he can only trust in the Lord’s goodness as he continues to mourn.

“Sometimes you don’t understand everything at the moment, but I’m trying to walk by faith and trust in the Lord,” Schrimsher said. “He’s in control of all things even though I can’t see or can’t understand at the time.

“I just keep putting one step in front of the other,” he said. “I can’t do that on my own, but just pray and trust that I rely on the Lord for that.”