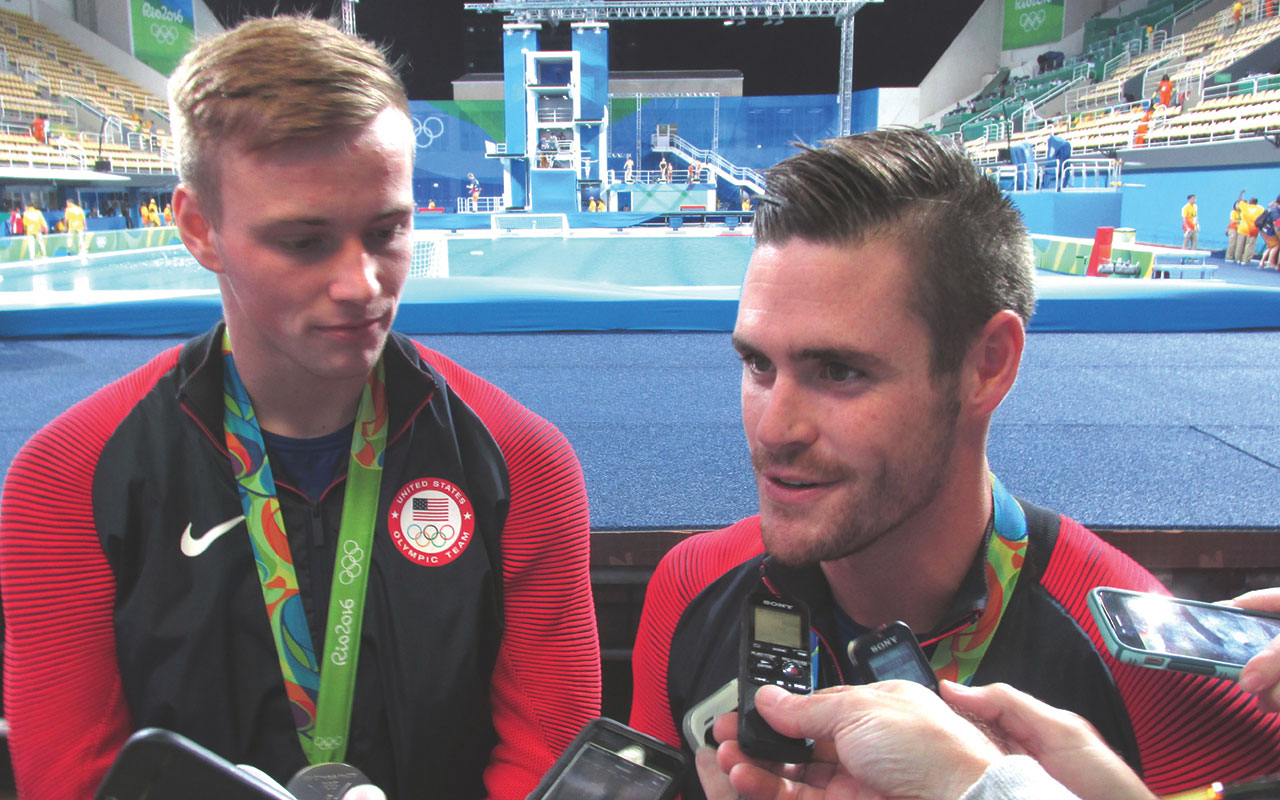 RIO DE JANEIRO (BP)—U.S. divers David Boudia and Steele Johnson have known each other for 10 years, since a teenaged Boudia drove the 10-year-old Johnson to practice every day.

On Monday (Aug. 9), Boudia teamed up with that “little giggly kid in the back seat,” as he remembered Johnson, to win a silver medal in the men’s synchronized 10-meter platform event.

“It was a successful day for both of us,” Boudia said. “Going into it and throughout the competition, I’ve never felt so content and so calm, and you’re at the Olympic Games with millions of people watching you. So it’s a pretty good feeling, and we know … that peace comes from God.”

Boudia and Johnson held second place after each of their six dives. The Chinese pair of Aisen Chen and Yue Lin dominated the event, posting a final score of 496.98 that easily outpaced the U.S. team’s 457.11 points.

The silver gives Boudia the third Olympic medal of his career after he won gold in the men’s 10-meter platform and bronze in the same synchronized event in London in 2012. This event was Johnson’s Olympic debut, and he credits Boudia with aiding in his development.

“He is the embodiment of the word ‘mentor’ to me,” Johnson said. “He’s been a solid rock for me in my walk through this Olympic journey and my walk through life outside of the pool. He’s gone above and beyond to help me become a man of integrity.”

Boudia, likewise, gives Johnson credit for helping him rediscover his passion and love for the sport during times over the past four years when he lost interest in diving.

“He’s been a special guy and a true brother in my life,” Boudia said.

In an interview with NBC after their competition, both Boudia and Johnson talked about how their faith prepared them to compete.

“When my mind is on this and thinking that I’m defined by this, my mind goes crazy,” Boudia said. “But we do have to know that our identity’s in Christ. We’re thankful for this opportunity to be able to dive in front of Brazil and for the United States. It’s been an absolutely thrilling moment for us.”

Johnson echoed Boudia’s statement about the importance of remembering that his identity is in Christ and not in the result of a competition.

“It just gave me peace,” Johnson said. “It gave me ease, and it let me enjoy the contest.”