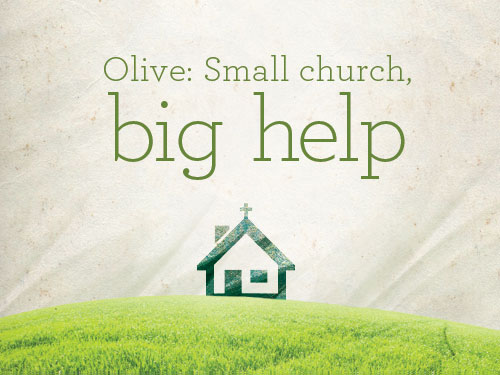 OLIVE—Kaye Davenport had the church phone in one hand, which made her the “official” communications officer for the disaster relief response at Olive Church Aug. 7, but it was the yellow T-shirt, lanyard and badge that set her apart from the dozens of other volunteers scurrying about.

Davenport, a resident of nearby Silver City, has attended Olive Church near Drumright in Cimarron Association for some 30 years. When the devastating wildfire swept through the area Aug. 3, she sprang into action as any highly-trained disaster relief volunteer would do.

Four days later, she was most visible among the church members and others who were busy turning the building into a mini department store, thanks to donations of water, food and clothing from as far away as Owasso.

Good thing, too. Davenport and her husband, Jack, know the relief effort is going to last awhile.

“We drove a four-mile square area Aug. 4, and we counted more than 100 homes destroyed,“ she said. “The Mannford Superintendent sent out an email that said 51 children have lost their homes in his district. Then the Olive Superintendent said they drove two bus routes, and they found 50 homes of their children that had been destroyed.”

Davenport had already begun the task of drawing up a list of those who need help.

“I’m trying to make a list of names of people for us to go out and assess their homes for ash out,” she said. “We have people in our church who know people who lost their homes.”

The help didn’t stop there, however.

“We’re having a meal brought in tonight and tomorrow night,” Davenport continued. “A barbecue place in Owasso brought food, and an Owasso church brought in a whole truckload of supplies. We have had donations of food, shoes, bottled water, cots, clothing and blankets.”

The response has been amazing to a fire that was amazing, she marveled.

“I just had never seen a fire so big and fierce when it came through,” she said.