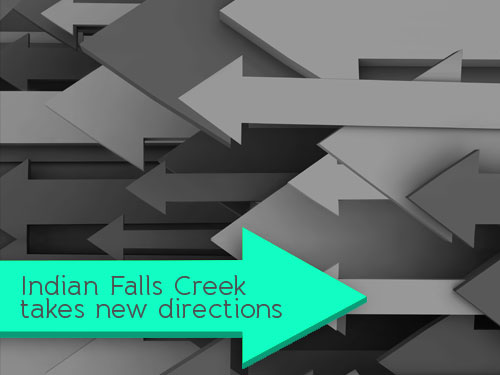 DAVIS—The effects of the struggling American economy were felt even during Indian Falls Creek (IFC), July 29-Aug. 2, when attendance was down by 600 from the previous year, according to Executive Director Victor Cope.

“The IFC board anticipated a drop this year due to the economic conditions in our nation and the first year of higher registration fees,” Cope said. “Even though we had fewer at camp, God always shows up to encourage, convict, forgive, inspire, call, bind up the wounded and send us back out into the world super charged to fulfill the Great Commission again.

“The IFC board is hoping and praying that economic conditions will improve, and more of our people will be able to attend next year. The board will also be seeking ways to ease the economic burden of attending camp.

“The IFC board also thanks all the cabin owners for keeping rental fees to a minimum for Indian week. Our churches still struggle to attend Falls Creek each year. I didn’t have anybody complain, but I noticed it was very difficult for some of our churches to attend, due to the poor economics in some of our Indian congregations.”

As it was, 2,000 people attended IFC, representing 82 churches from 20 states across the nation. One attraction, perhaps, Cope said, was the return of keynote speaker evangelist Junior Hill from Decatur, Ala.

“Junior Hill has just been a tremendous preacher for us,” Cope said. “This is his second year here, and he just has a natural connection with our people. I think it’s cultural. Our kids are taught to listen to the elders, and I think that’s part of it, too. I sat by some middle school kids, and, I tell you, those kids were getting every joke Brother Junior told!”

Cope said a change in some public school schedules also forced IFC to go to a Sun.-Thurs. schedule from the normal Mon.-Fri. format, and that may have affected attendance as well.

Two things that didn’t change were the blood and bone marrow drives.

“We have been doing that for 10 years or more,” Cope said. “One of our pastor’s wives had leukemia and needed blood desperately, so we just decided to start having a blood drive every year. And, then we added the bone marrow registry.

So, once again, Thursday night was “haircut night.” Cope and several others, including BGCO past president Emerson Falls, either got “buzzed,” or left proudly wearing new Mohawk haircuts to the delight of the crowd assembled in the Tabernacle.

On a more serious note, IFC introduced a new educational direction for IFC 2013 and beyond. Training and education will be enhanced at camp for pastors (existing/new), missionaries, women, young adults and youth.

“We hope the new direction will encourage more of our people to heed the call into ministry,” Cope explained. “The program will be co-chaired by Falls and Oklahoma Baptist University faculty member Jennifer Barnett.

IFC campers also were introduced to the capital campaign, the goal of which is to raise $1 million for the endowment fund.

“The endowment would generate $50,000 in interest each year, which would allow IFC to strengthen programming and help more of our churches to attend camp,” Cope said.