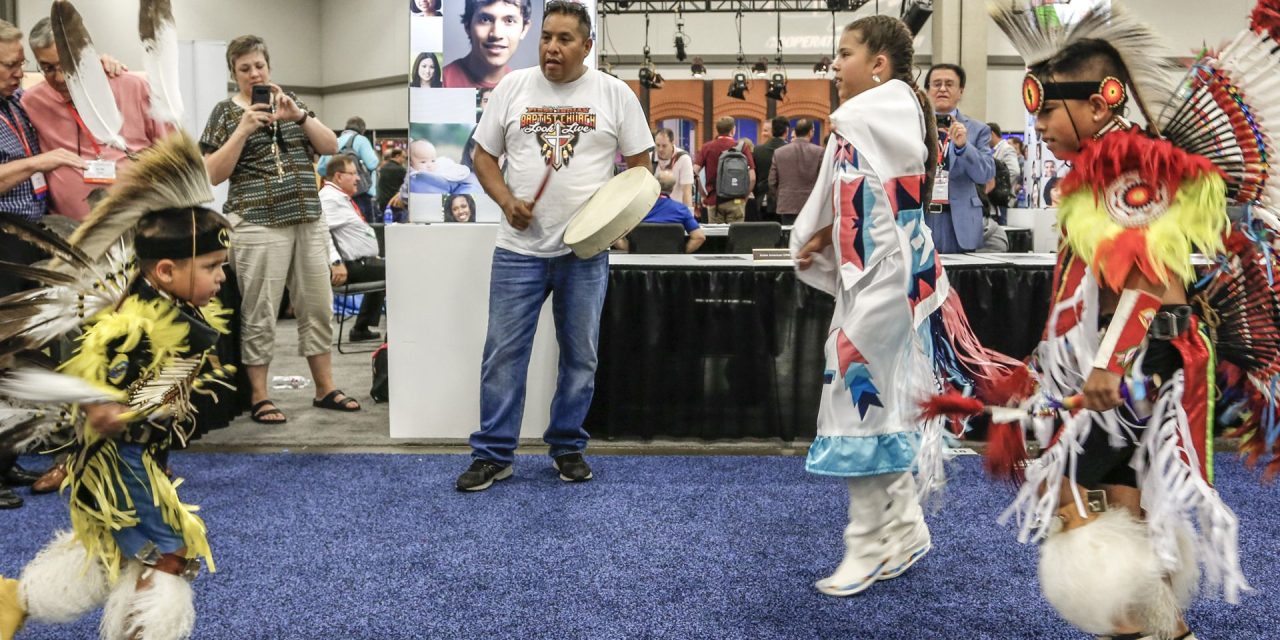 Above: Members of the Fellowship of Native American Christians give a presentation in the exhibit hall of the 2019 SBC Annual Meeting in Birmingham, Ala. BP file photo 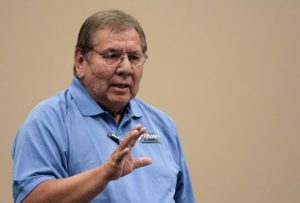 “The recognition of past wrongs is a step in the right direction. However, Native people have heard apologies and decrees before. Christians need to put actions to our words if we want to see Native people come to Christ,” Falls told Baptist Press. “We need a national effort to share the love of Christ to a group of people who continue to suffer.

“Such an effort should be led by Native American Christians in partnership with non-Native Christians. By demonstrating Christ-like love, we can earn the right to share the Gospel.”

The SBC resolution followed the May, 2022 release of a federal Bureau of Indian Affairs report detailing the Christian Church’s role in the forced conversion and cultural assimilation of Native Americans. The report does not mention Southern Baptists, but references churches including Congregational, Catholic, Methodist, Episcopal and Presbyterian.

“It has been said that the next great awakening will be led by Native Americans. Why not?” Falls said. “We have passed and affirmed a powerful resolution in Anaheim (Calif.). Now is the time to demonstrate our sincerity by our actions. Here is the question of the hour: What are we going to do now?”

“To see a president who is willing to implement these kinds of changes and programs that take a stab at revitalizing the language of each of these tribes,” Keahbone told Baptist Press, “that’s a momentous occasion and it’s going to be a big help for tribes.

“Any time a wrong is made right, there’s always an opportunity for healing.” Keahbone, a Comanche with Cherokee and Kiowa ancestry, is senior pastor of Lawton, First. Keahbone read the SBC resolution at a federal government sponsored Road to Healing Tour for Native Americans at Riverside Indian School in Anadarko and received applause.

“Although Native people have been exposed to the Gospel for 500 years, the majority have never chosen to become followers of Jesus Christ,” Falls said, pointing to history and missiology as primary reasons.

“Native Americans have suffered greatly due to the European encroachment of their homeland,” he said. “Native people were forcibly removed from their homes and placed on reservations where they suffered from disease, starvation and prohibitions on their cultural practices. Much of this was done in the name of Christianity.”

Falls pointed to the 1493 Catholic Doctrine of Discovery that encouraged the European takeover of the Americas to spread Christianity, and the 1823 Johnson v M’Intosh court ruling that legalized the seizure of lands from indigenous peoples.

“Concerning missiology, churches were guided by the Americanization policy which said that when indigenous people learned American customs and values, they would soon merge tribal traditions with European-American culture and peacefully melt into the greater society,” Falls said. “However, the practice was not merger but forced assimilation.”

The SBC resolution “On Religious Liberty, Forced Conversion, and the Federal Indian Boarding School Initiative Investigative Report” rejected the Americanization policy, encouraging “Southern Baptists to decry the methods of forced assimilation and conversion, as well as the dehumanization of fellow image bearers.”

Messengers condemned “any federal government’s policy, former or current, to replace ‘the tribal culture for its own’ in an effort to ease their intent ‘to separate tribes from their territories,’” and stood against “forced conversions and distorted missiological practices as contrary to our distinctive beliefs as Baptists in religious liberty and soul-freedom.”

Efforts to eliminate Native American culture have been successful, Falls said, and have driven some Native Americans to equate Christianity with the promotion of “cultural genocide.”

“When presented with the Gospel, Native Americans have had to choose to either remain Native or become Christian,” he said. “This is not good missiology.”