Oklahoma slips to second in ranking of pro-life states 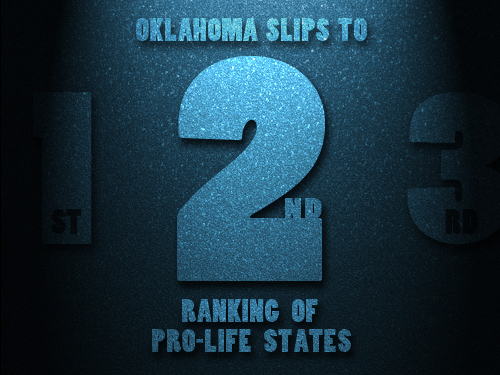 WASHINGTON (BP)—Oklahoma has slipped behind Louisiana into second place in the latest rankings of pro life states by Americans United for Life (AUL).

Louisiana is the most pro-life state in the country, while Washington is the least, according to AUL.

It was the second time in three years that Louisiana has held the top spot on a list based on the states’ policies on life issues such as abortion and physician-assisted suicide. Last year, Louisiana was the runner-up to Oklahoma.

The most-improved states, according to AUL, were Arizona, Indiana, Kansas, North Carolina and Utah.

It was a record-breaking year for state regulations of abortion. AUL reported more than 70 “life-affirming, abortion-related” bills were enacted. Earlier in January, the Guttmacher Institute said states adopted 92 restrictions on abortion, far surpassing the previous high of 34. In all, 47 states considered more than 460 abortion-related proposals, according to AUL.

The rankings show “tremendous gains in defending life in law,” said Charmaine Yoest, AUL’s president. “The states are preparing for the day after Roe.”

Roe v. Wade is the 1973 Supreme Court decision that not only struck down all state abortion bans, but also had the effect of legalizing abortion for any reason through all stages of pregnancy. The Supreme Court’s reversal of Roe would return abortion policy to the states.

The pro-life laws enacted by states in 2011 included ones that:

AUL, based in Chicago, is a prominent legal organization in the pro-life movement.

The “Life List,” as it is known, can be accessed online at www.aul.org/auls-life-list-2012-rankings.

The 21st Annual Rose Day at the Oklahoma State Capitol is Wed., Feb. 8.

Participants are encouraged to bring roses to their legislators, the lieutenant governor and governor and encourage the legislators to protect the unborn by introducing and supporting pro-life legislation in our state.