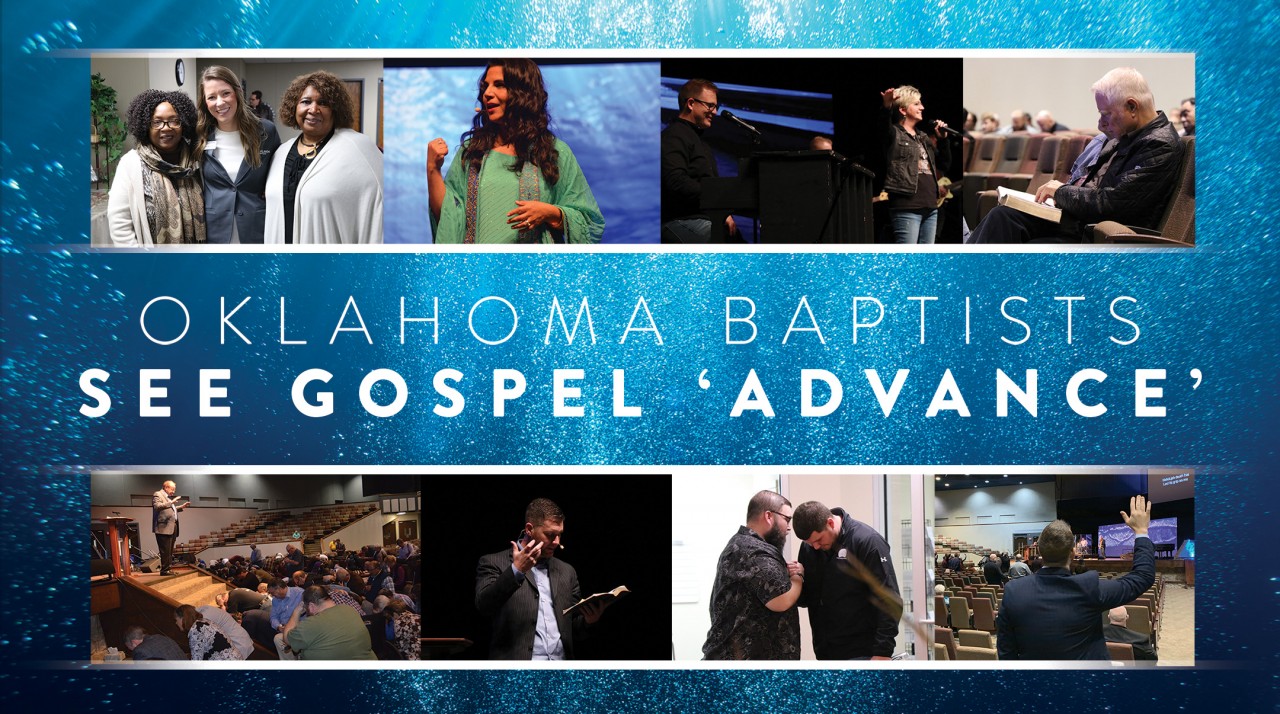 DEL CITY—Evangelism, baptism and discipleship were emphasized throughout the Advance Conference, Jan. 27-28 at Del City, First Southern. Having “Immerse” as its theme, the conference did make an emphasis on baptism, but many main session and breakout session speakers shared how baptism is an important representation of evangelism and discipleship.

“As Baptists, we love baptism so much we named our denomination after it,” Ed Stetzer, dean of the Wheaton College School of Mission, Ministry and Leader, facetiously said in the opening main session of the Advance Conference.

Hance Dilbeck, executive director-treasurer of Oklahoma Baptists, gave an interpretation of the theme “Immerse,” sharing that baptism ensures the fulfillment of the message of the Gospel.

“If we really want to stand before the Lord Jesus Christ and know how we are doing, then we’ve got to pay attention to who we are leading to Christ and who will follow Christ in believer’s baptism,” Dilbeck said.

Adam Greenway, president of Southwestern Seminary, spoke in the Monday evening session and creatively titled his sermon “How do we advance so we can immerse,” using both the new name of the conference and the theme, as he spoke from Acts 2:36-41.

“Baptism is not a saving sacrament. It is a symbolic ordinance,” Greenway said. “Jesus gave the Church, through the apostles, the authority to baptize. That’s why baptism is a church ordinance. It’s committed to the Church… where we publicly profess what has happened in our salvation.”

Tom Elliff, former president of the International Mission Board, led a time of invitation, asking those who attended the Monday evening session to come to the front as an altar to pray and ask God to give them a heart of compassion for lost people.

“This altar is for every person in this room who will say ‘Dear God, by your grace I am willing for you to do in my life whatever you must do in order that I might learn to care for others as You care for them’” Elliff concluded. A majority of the attendees came and knelt down in prayer after Elliff’s appeal.

The Jan. 27 afternoon breakouts were “Impacting Brokenness with the Gospel,” led by Dilbeck; “Immersing the Next Generation,” led by Greg Stier of Dare 2 Share Ministries; and “Immersing Children,” led by Charlie Gatton, childhood ministry partner of Oklahoma Baptists.

Garcia was the final main speaker at the Advance Conference, and he concluded with an observance of repentance.

“Repentance is the pathway to restoration,” Garcia said. “I’ve never seen God move so much in our church than after the times the church came to a moment of confession and repentance.”

By the end of the conference, those who attended were encouraged and inspired to lead their churches to make a difference in their communities, as well as focus on making an impact through baptism.

“This was a great conference,” said Rusty Gunn, pastor of Sand Springs, Church That Matters. “Inspiring, challenging, relevant and convicting.”