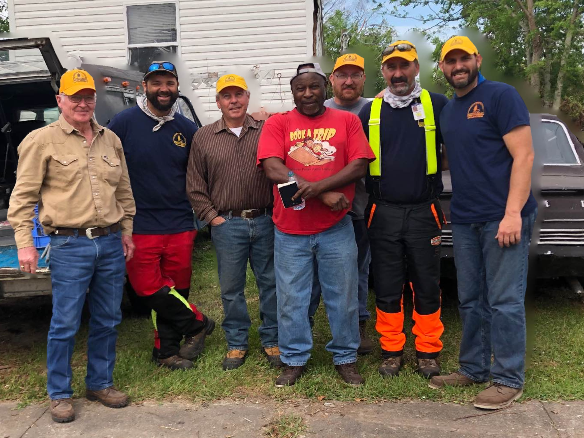 LAKE CHARLES, La.—Oklahoma Baptist Disaster Relief (DR) continues to help those who were affected by recent hurricanes. In the weeks many Southern Baptist DR volunteers served in the aftermath of Hurricane Laura, more than 350 people made professions of faith in Christ. 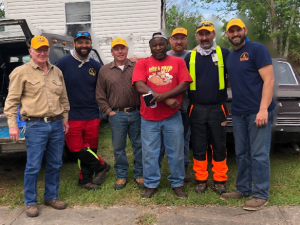 “Meeting people in their brokenness gives opportunity for advancing the Gospel,” said Rusty McMullen, pastor of McAlester, First. “That’s what Disaster Relief does primarily. It opens the door for people in the middle of their hurt and pain and difficulty to be able to come in and meet needs physically. As you meet needs physically it opens the door to talk about the Gospel.”

McMullen and a group of six men from his church spent a week in Lake Charles, partnering with a group from Claremore, First with Danny Cotner and Randy Swift working as the Blue Caps (DR team leaders).

“What we said from day one is the reason we are here is to share the Gospel,” McMullen said about serving with DR chainsaw teams. “We were constantly looking for opportunities. We worked on 15 homes during the five days we were there, and at every single home, minus one, we got to share the Gospel with the homeowner.”

While they were cleaning a yard, a neighbor named David came over to talk with McMullen and his team members. The DR volunteers explained to David why they came from Oklahoma to serve hurricane victims.

McMullen said David told them he “rode out the storm” in his house, experiencing all kinds of emotions and dealing with the fear of the hurricane. After they connected, McMullen shared the Gospel with David who prayed and made a profession of faith in Christ.

“This has changed my life,” David said. “What you guys have done, not only in your work but also what you’ve done in sharing the truth of the Gospel with me has changed me.”

McMullen said David began to weep while they were praying, and the new believer in Christ was overcome with joy. “It was a beautiful picture of the Gospel moving in his heart,” McMullen said.

David and Brenda Ross, members of Broken Arrow, First, work as a team when they serve through DR. David is an assessor, finding out how much damage is at a house and what DR needs to do for clean-up. While he is making his assessment, Brenda works as a chaplain, connecting with the homeowner.

“Anytime we go out, we pray that doors will be opened to share the Gospel,” Brenda said about how she and David serve in affected areas.

As they were serving a home in Lake Charles, David and Brenda met a woman who was so appreciative of what DR could do to help her and her husband. Brenda said the woman feared their house would never get repaired or yard would never get cleaned because her husband has health issues and not able to do most of the work himself.

Brenda listened as the woman spoke. She then found an opportunity to share the Gospel with her. Near the end of their conversation, David joined them when Brenda asked if the woman would pray and make a profession of faith in Christ. The woman was willing.

Just as they were about to pray, the woman’s husband returned to the house. At first the Rosses weren’t sure if they should go ahead and pray or wait for the husband. They chose to wait and allow him to participate. Both the man and the woman prayed and made professions of faith in Christ. “They were joyful about their decisions,” Brenda said.

There are many other stories of DR volunteers serving and advancing the Gospel. All of this is possible because of churches serving together and giving through the Cooperative Program.

“As you take part together in the Gospel advance, it binds us together in recognizing that our Cooperative Program dollars go an extra step by helping us to be on the field,” McMullen said. “In circumstances such as these, we know Disaster Relief would not exist if it weren’t for the cooperation of the churches. It all happens because we are able to join together in Cooperative Program gifts and also physically work together.”