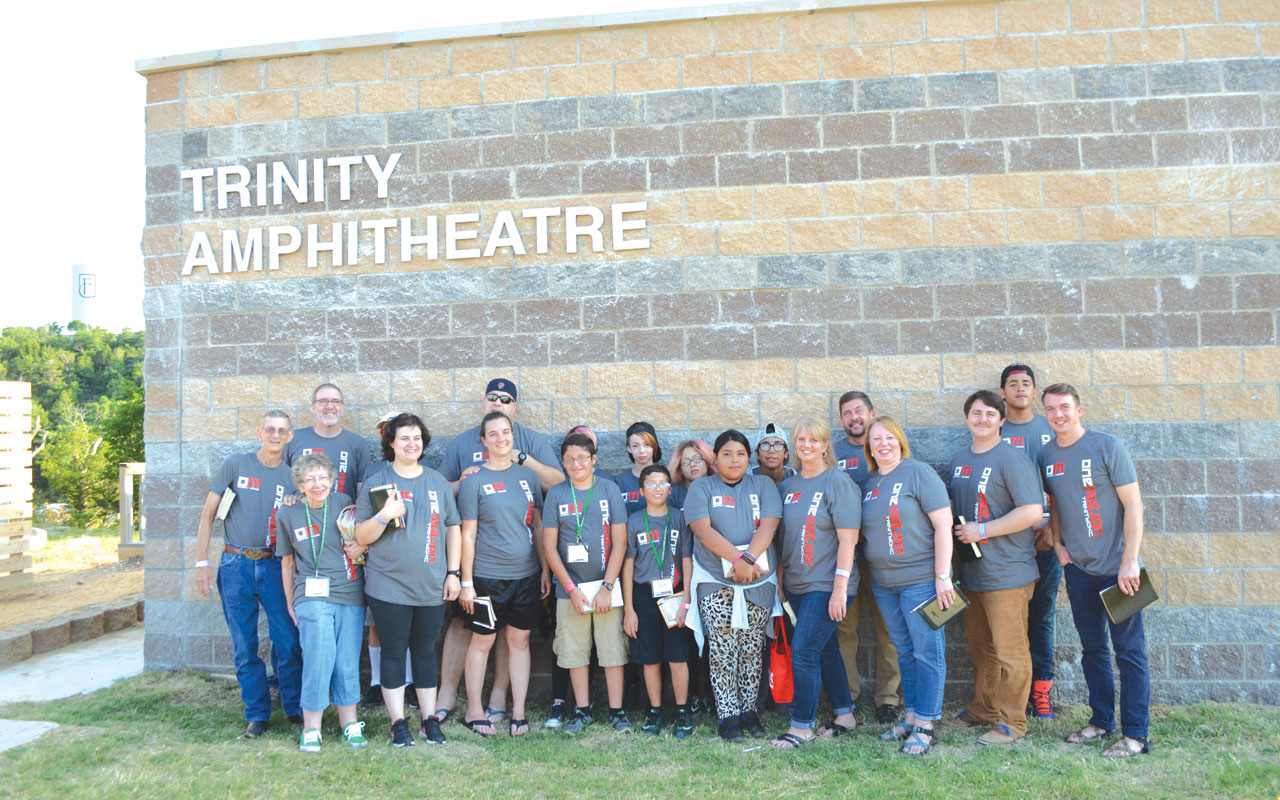 DAVIS—For most of those strolling on Downing Way toward the R.A. Young Tabernacle to attend the evening worship service at Falls Creek July 19, the small group gathered alongside the small structure to their left went unnoticed.

But, to the youth, staff, sponsors and members of Oklahoma City, Trinity who met with officials of the Baptist General Convention of Oklahoma (BGCO) for a short ceremony of special significance, it marked a homecoming of sorts that revived memories that stretched back through decades and linked the event to the very foundations of the encampment 99 years ago.

“Whenever we built the new tabernacle you see over there, we had to take down some of the cabins, and the Trinity cabin was one of those,” said Anthony L. Jordan, BGCO executive director-treasurer, as the unveiling ceremony for the naming of what used to be called the Outdoor Amphitheatre to be now called the Trinity Amphitheatre.

The once wooden outdoor venue, built by Baptist Builders, now sports an attractive stone exterior, which matches the outside of the new Mathena Family Event Center nearby. It has a covered stage/performance area and seating to accommodate more than 100 people. It overlooks the creek

“Some of you came to Falls Creek many years ago, and you know it looks a lot different now than it did then. I have been praying about naming the outdoor amphitheatre in honor of Trinity for a long time. We want this to be an encouragement to you and be a reminder of when you came here and spent time in your cabin on this site. Now, this space is being used by young people to share their talents and gifts and it is a great facility.

“I just want you to know that Trinity has blessed Oklahoma Baptists in myriad ways across the years, and we are excited about this event. So, we do this in honor of the history, but even more inportant, the future of Trinity Baptist Church.”

Trinity Pastor Tobin Jackson thanked the BGCO for the “great gift” from the convention.

“We love what the Lord is doing now in our church, celebrate what He has done for the past 100 years and look forward to just come incredible things in the future. To bring our first youth group back to Falls Creek in many years is very special.

“We feel blessed, honored and humbled by this.”

Jordan then asked Jackson to voice the prayer of dedication for the facility.

Oklahoma City, Trinity’s Falls Creek roots can be traced back to the assembly’s very foundations through one of the campground’s founders, J.B. Rounds, who became the church’s first pastor on May 1, 1911. In 1917, Rounds—also the state Baptist Young People’s Union (BYPU) leader—and W.D. Mohrer selected the site for Falls Creek, and Rounds and his sons built the first road from Price’s Falls to the assembly grounds. Prior to that, the grounds had been accessible only by foot and on horseback.

Members of Trinity first attended Falls Creek in 1919, and the church’s BYPU raised the first $25 to pay for the initial 25-year lease on the lots where the cabin was later built. Young people slept on cots in tents on leased lots for nine years. In 1936, a basement was completed for the cabin, and a year later, the top floor of the building—sided with log planks and painted brown—was completed in time for the assembly.

Forty years later, in 1987, the Trinity cabin was remodeled and rededicated, but then sold back to the BGCO in 2002. On Oct. 5, 2004, the cabin burned down for construction of the new tabernacle.

Jackson paused for a moment after the ceremony before joining his group in the worship service in the tabernacle to reflect on the significance of the evening’s event.

“That is where our cabin once stood,” he said solemnly, and we have talked about that during our cabin time this week. But, this is a new day. God has brought Trinity a long way in the last few years, and we are looking forward to where He is going to take us in the future.”