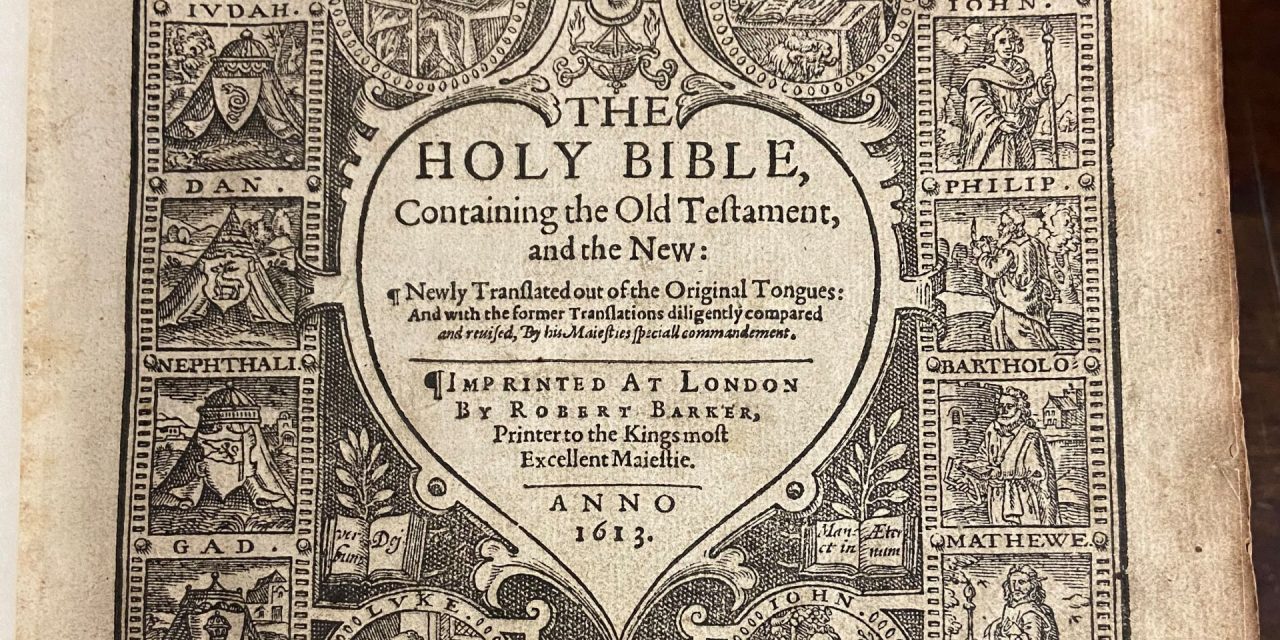 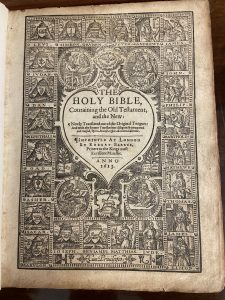 OKC, Shields Blvd. donated a rare print of the 1613 King James ‘He’ Bible. Photos by Bob Nigh

The “Great He Bible,” refers to a typographical error in the third chapter of the Old Testament book of Ruth, verse 15, which uses the incorrect pronoun “he,” instead of the correct pronoun “she.”

Julie Rankin, director of library services at OBU, said, “We at the OBU Library are honored to be able to house the generous gift of the 1613 King James “He” Bible from Pastor Gary Bostwick and Shields Boulevard Baptist Church in the J.M. and Helen Gaskin Baptist Historical Library and Archives. It is a humbling experience to be able to see such a rare piece of history before our own eyes. This Bible was one of the earliest printings of the King James Bible, and we hope to preserve it for many years to come so that more people can experience this sacred piece of our Christian heritage.” 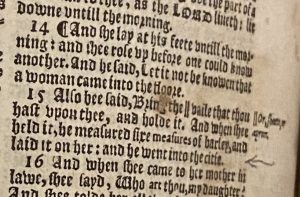 Rachel Walker, OBU collections librarian who oversees the Gaskin Archives, said an expert with the Museum of the Bible in Oklahoma City is in the process of calculating the cost of making needed repairs to the book.

“A conservator came to the archives on April 5 to see the Bible, and will submit a cost estimate for doing conservancy work on it,” Walker said. “That might include cleaning it, repairing some pages and rebinding it.”

The Bible was donated several years ago to the church by Linda L. Drabik, who obtained it from the private collection of Mr. and Mrs. David C. Sprague of Oklahoma City, who procured it from the late W.A. Stewart, a collector in Pittsburgh, Pa.

The Bible’s title page shows that it contains “the Old Testament and the New: Newly translated out of the original tongues: and with the former translations diligently compared and revised, by his majesties special commandment. Imprinted at London by Robert Barker, printer to the king’s most excellent majestie. Anno 1613.”

Barker was one of three printers—along with Bonham Norton and John Bill—authorized to print the 1611 King James Bible, a task that actually took three years to complete.

The Bible’s exquisitely ornate title page also features the names of the 12 tribes of Israel and the Apostles, along with the names of the four Gospel writers: Matthew, Mark, Luke and John.

Bostwick said the Bible had been displayed in a wooden and glass case in a hallway of the church for years.

“The church members are 100 percent in favor of donating the Bible to the archives,” he said, “Because they want it preserved and taken care of, which is something we couldn’t do. I’m just glad it is going to be in good hands.”

“We are so thankful for this gift to the archives at OBU,” Oklahoma Baptists Historical Secretary Bob Nigh said. “This is a very rare item and is a monumental gift to the convention.”