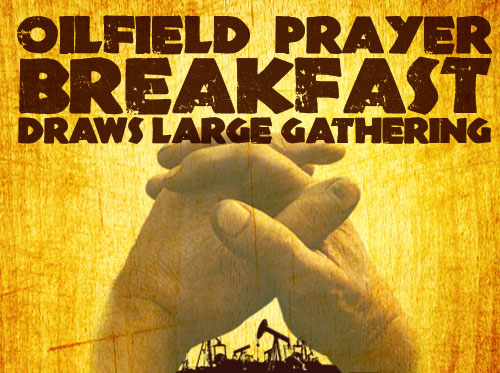 Nearly 700 people from the petroleum industry gathered for the Second annual Oilfield Prayer Breakfast, March 27. The event, held at the Cox Convention Center in Oklahoma City, was hosted by Oil Patch Chaplains, a ministry created through the Baptist General Convention of Oklahoma, and the Oilfield Christian Fellowship.

The breakfast featured time for prayer, a testimony and music.

“If we want to reach Oklahoma, we need to first reach our most major industry,” said Tom Beddow, who works with the BGCO in Oil Patch Chaplaincy.

“Your gifts help reach people for Christ,” said Beddow. “Through Bible distribution, meals, chaplaincy training and more, we are making a difference.”

In 2006, a group of Christians in the Oil industry gathered together in prayer, realizing that there was a greater need for Christian chaplains in the oil patches of Oklahoma.

John Bird, president and co-founder of the Oilfield Christian Fellowship, said similar events have occurred in Denver, Colo., and Lafayette, La. In addition to Oklahoma City, a fourth Oilfield Prayer Breakfast is being planned for Houston, Texas.

In addition to the prayer and speakers, a Proclamation from Oklahoma Gov. Mary Fallin was read. The Proclamation read in part, “Whereas, Oklahoma is blessed with an abundance of oil and natural gas and is one of the nation’s top producers; and Whereas, we acknowledge that all natural resources are created by God; and Whereas, the state of Oklahoma recognizes the value of these companies to conducting business based upon Christian principles; Note, therefore, I, Mary Fallin, Governor of the State of Oklahoma, do hereby proclaim March 27th, 2012, as ‘Oilfield Prayer Day.’”

Delivering the keynote address was Karl Kurz, who previously served as chief operating officer of Anadarko Petroleum Advisors and now is managing director of a capital firm.

Kurz challenged attendees to pray with their spouses every day and take on an accountability partner.

“I grew up in a Christian home,” said Kurz. “It was not until a (Boy Scout) campout in which three of my friends tragically died in an accident that I began to ask important questions like ‘Is there a God?,’ ‘Does He care about me?’ and ‘How do I know Him?’”

Kurz made a profession of faith and encourages Christians to be bold in sharing their faith with others.

“I went from knowledge to understanding, from darkness to light,” he said.

Quoting Proverbs 27, Kurz challenged attendees to be the iron that sharpens iron.

“I want others to come to know my Savior,” he implored.