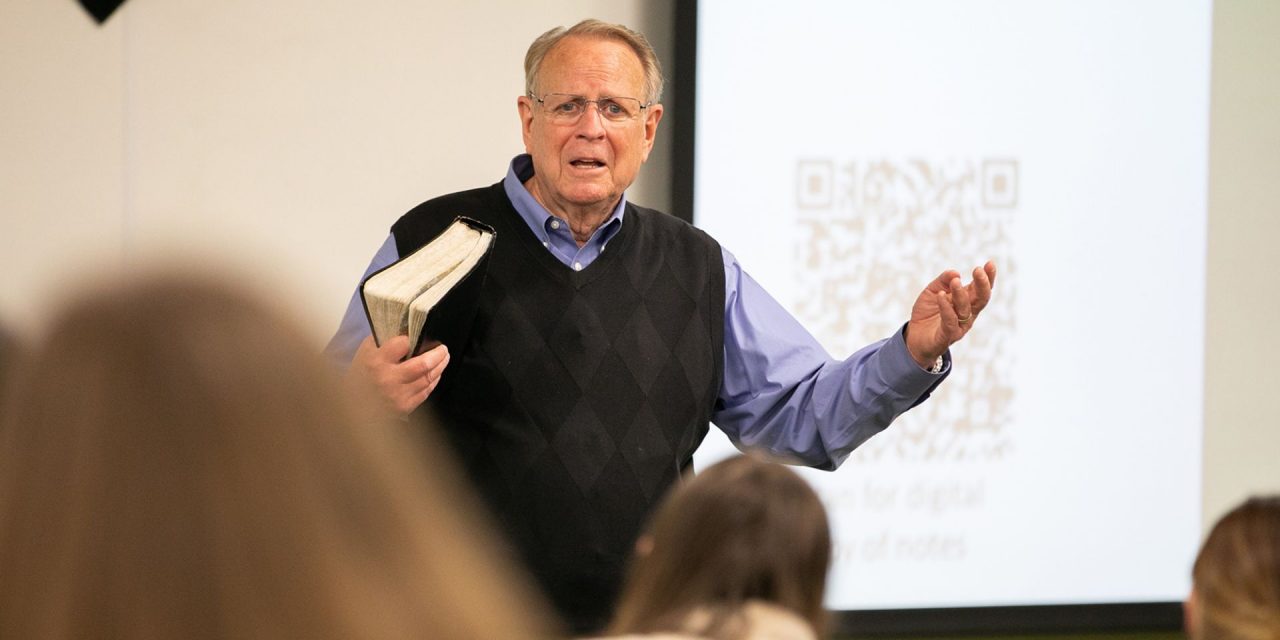 Above: Tom Elliff, former IMB president and lecturer, mentor and facilitator in missions for the Tom Elliff Center for Missions, shares during OBU’s Missions Forum March 31. 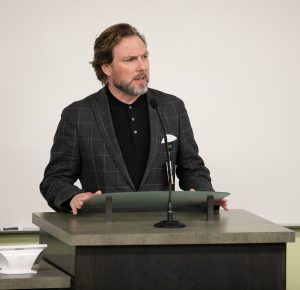 OBU President Heath A. Thomas shares about the mission of the Tom Elliff Center for Missions during its inaugural missions forum March 31.

The center launched in January and is designed to advance the Gospel of Jesus Christ, enhance education in missions at OBU and empower missionaries by connecting local churches to OBU and the world. The center is named for Tom Elliff, former president of the International Mission Board (IMB).

The Elliff Center enhances the education experience of OBU students by introducing them to key mission leaders on the field through missions forums and additional campus events. Local churches connect through the center as they send students to OBU and support their efforts to go into the world to advance the Gospel.

OBU students are then equipped for their callings as missionaries through one of two OBU programs, the Bachelor of Arts in global marketplace engagement and the Bachelor of Arts in cross-cultural ministry. The Elliff Center also partners with OBU’s Avery T. Willis Center for Global Outreach to equip OBU students for missions through global outreach training and hands-on experience on the mission field. A generous ministry partner has funded the work of the center and provided resources to achieve its purpose. 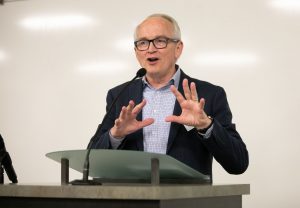 Elbert Smith, director of the Tom Elliff Center for Missions and assistant professor of missions, shares about how the center equips students for service.

Elbert Smith, director of the center and assistant professor of missions, opened the forum and welcomed guests. Mike Hand, special assistant to the president for great commission initiatives, also offered greetings and extended a special welcome to pastors.

“We need to understand the significance of this moment for Gospel advance in the world,” Thomas said. “The reason I say that is because OBU was created 112 years ago, and the founding vision was very simple…salt the state, this new state of Oklahoma, and salt the world with followers of Jesus who are equipped to live all of life, all for Jesus. That’s our founding vision, and that’s why I’m doing what I’m doing today as president of this great institution.

“When we think about this Tom Elliff Center for Missions, what we’re talking about is taking Jesus’ lordship in nursing, in business, in math, in English, in education, in any of the outlets that we have in the educational environment in this University, and leveraging all of those for Gospel advance in all the world,” Thomas said. “OBU is a strategic center for Gospel advance for the cause of Christ among the nations today. We have the opportunity to add value to the community as a platform for Gospel advance.

“I’m excited about this center…because Jesus really is king of everything. We have the opportunity, the privilege, of telling a lost and broken world that Jesus is king of all.”

“I’m sorry if I’m very emotional, but the longer I live, the more it means something to me that people are without Christ,” Elliff said. “The Lord wants us to feel something. The Bible says Jesus felt compassion.”

“But it was not just a feeling. It had a force to it. It was the kind of feeling that says, ‘We’ve got to do something about this.’”

Elliff related that to our calling as Christians to share the Gospel, noting that Jesus wants our hearts to be touched with compassion for others so that we feel compelled to do something about the lostness that pervades our world.

He explained how the Elliff Center for Missions equips missionaries for service, noting the key role the center plays in training students to be equipped for missions, so that when they graduate from OBU, they will not only have experience serving in other contexts, but they will also already be trained in the same manner as IMB missionaries.

He shared that the Elliff Center exists, “so that all of the things an IMB missionary would need in order to go to the field,” he said, “can be taken care of here while you are on the campus,” rather than delaying that training until a later date following graduation.

Elliff implored the students to take advantage of this opportunity and to encourage others to do likewise.

“If ever there was a time in history, or a place, or a school, or an opportunity for us to prove what we believe by what we do, it’s right here, right now,” Elliff said. “And the fact that you all are here, the fact that you’re a part of this, the fact that it’s even happening is a miracle in itself.”

“I just want to pour out my heart to you, and I just want to say to you, whatever you do, tell your friends, if you’re a student, to get involved,” he said. “So, it is time to prove what you believe by what you do.”

He closed with an encouragement to pastors on how the Elliff Center can partner with them and their congregations for Gospel advance.

“And pastors, we want to help you as you guide your students from the church, through the school, to the world, so they can be a multitude of multiplying disciples following Jesus into the harvest. That’s the vision.”

OBU will host the next Elliff Center event on April 21. For more information about the Tom Elliff Center for Missions, visit okbu.edu/elliff-center.