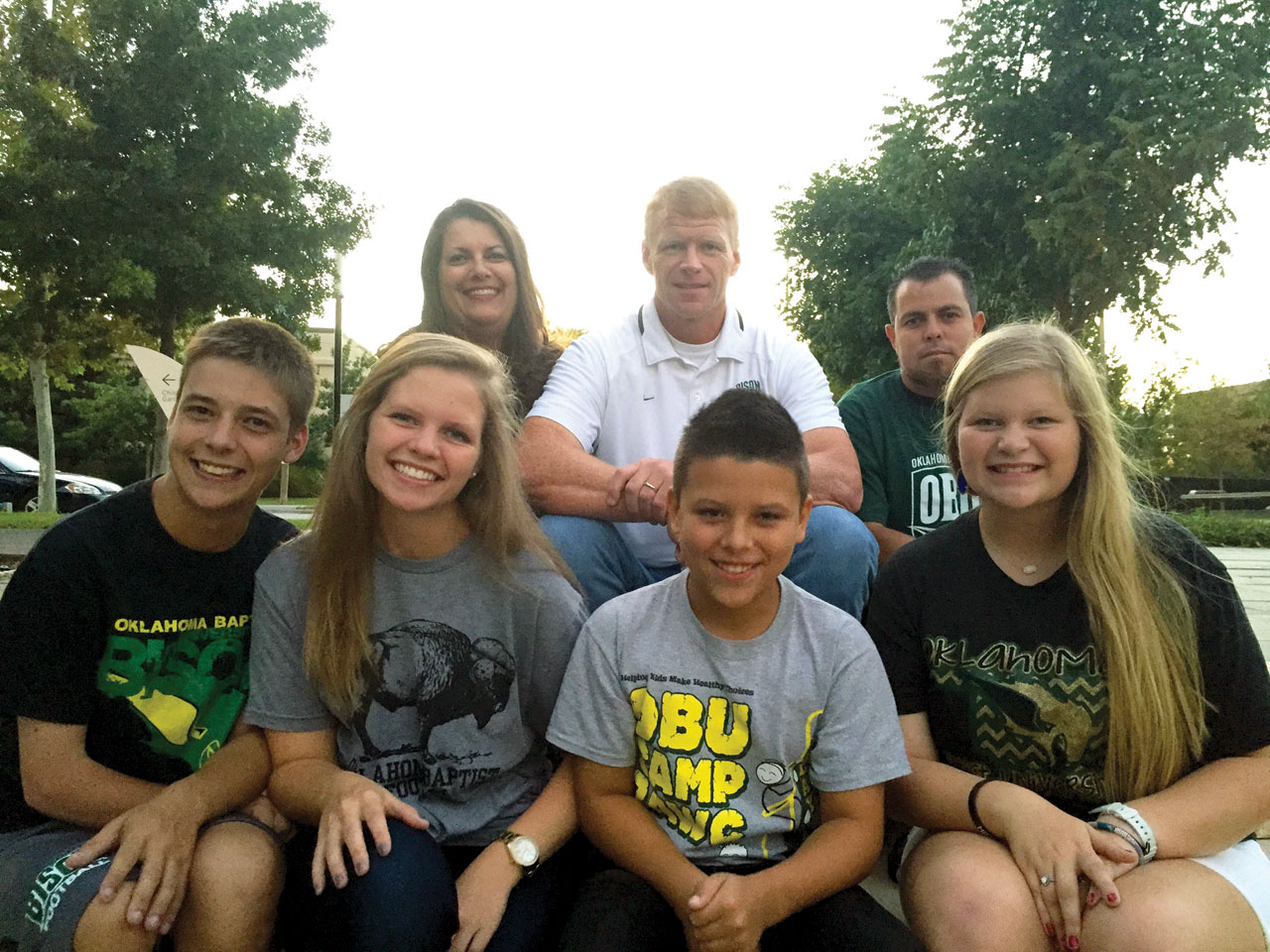 SHAWNEE—Chris Jensen may be best known for his role as head coach of the Oklahoma Baptist University (OBU) football team, but this quiet-spoken, contemplative leader will be quick to tell you that more important than  plays on the field, is the influence he has in shaping his young players into men of God.

“In today’s society, many kids are not getting the fundamental qualities they need to be successful in life.  In athletics, you see coaches teaching kids accountability and perseverance and how to deal with failure,” said Jensen.

The OBU coach and his wife, Patti, realize that this breakdown in the role of parenting in our society is a problem with far-reaching consequences.  There are many families in our state in desperate need of training and support. The Jensens have answered God’s call to play a part in being a bridge for these families by acting as foster parents through the Oklahoma Department of Human Services (DHS).

God first began to tug at the Jensens’ hearts when they were attending Oklahoma City, Emmaus. The church has a close-working relationship with Oklahoma Baptist Homes for Children. The Jensens became a “visiting family” for two young sisters who were unable to make visits to their biological home. After several months of prayer and battling with the Holy Spirit, the couple agreed God was leading them to commit to becoming foster parents for other children in need. Their own three children, Tayler, Tanner and Camryn, were enthusiastically on board.

Over the years, Chris and Patti have had the opportunity to influence the lives of 18 foster children, but none has been more fulfilling than that of a 6-year-old boy named Isaiha in 2011.  He was their ninth placement and only in their home for six months.

After Isaiha’s successful reunification with his parents, April and Chuy, the family wanted to maintain the relationship with the Jensens. Chris and Patti began to mentor the couple. This bond became especially important in November 2012, when April suddenly passed away. Chris and Patti were the first people Chuy called.

Chuy feels comfortable calling to ask them for advice or even sometimes just to vent some frustrations, but Chris and Patti say the relationship is not at all one-sided. It has been a great blessing to them as well.

Chuy genuinely loves Isaiha and wants what is best for him. Chris and Patti’s gentle guidance has helped to make him a better father.  When talking with Chuy about what his and Isaiha’s relationship with the Jensens means to him, he was very quick to answer, “They are family, and Isaiha loves them.”

Isaiha still enjoys spending birthdays, holidays and occasional weekends with the Jensens. During summer visits with them, he has been able to attend several athletic camps, Fellowship of Christian Athletes Competitors Camp, and CrossTimbers Children’s Camp with Shawnee,  Immanuel through the help of scholarships. These are experiences he would not have otherwise had. God spoke to Isaiha at CrossTimbers this year, and he began asking many questions.  The Jensens were blessed to be able to see him baptized in his home church.

For the Jensens, foster care isn’t necessarily about making sure you have some dramatic impact on a child. It’s about loving people. Patti points to Scripture that calls us to action in sharing God’s love with others. John 13:34—“A new command I give you:  Love one another.  As I have loved you, so you must love one another.”

Patti admits that this isn’t always easy to do. “Foster care is challenging, but it‘s time well spent, and the investment in lives truly matters.”  Chris adds that they do their best to parent the kids for the time they have them and pray that they made some kind of difference. “Down the road the kids may not know why they are drawn to God, but maybe we had a small part in that.”

Our heavenly Father has a special place in His heart for children. When others sent them away, He called them to sit in His lap and admonished His followers that they should have the same childlike attitude of trust in God. In His Word, God often calls on believers to take care of people in need, and He specifically mentions orphans.

“Religion that God our Father accepts as pure and faultless is this:  to look after orphans and widows in their distress and to keep oneself from being polluted by the world.”—James 1:27

Many children, through no fault of their own, find themselves in need of a home. They are thrown into a situation that some would label hopeless, but, as Christians, we know there is hope—a heavenly Father. How fitting that James addresses God as “our Father” when calling on us to be doers of His word by taking care of orphans. As His church, we must act as His hands and feet to stand in the gap and show them this Hope.

Certainly there is a desperate need for Christian foster homes, but there are also other ways to be doers of His Word:

• Develop a program that supports foster families in your church

• Mentor or tutor a child

• Offer a job to teens

• Volunteer on a hotline

• Provide scholarships and other financial support

For more information, call either the Bridge Resource Support Center at 800/376-9729, or your local DHS office and ask how you or your church can help.