OBU celebrates the winter Class of 2020 during Nov. 21 ceremonies 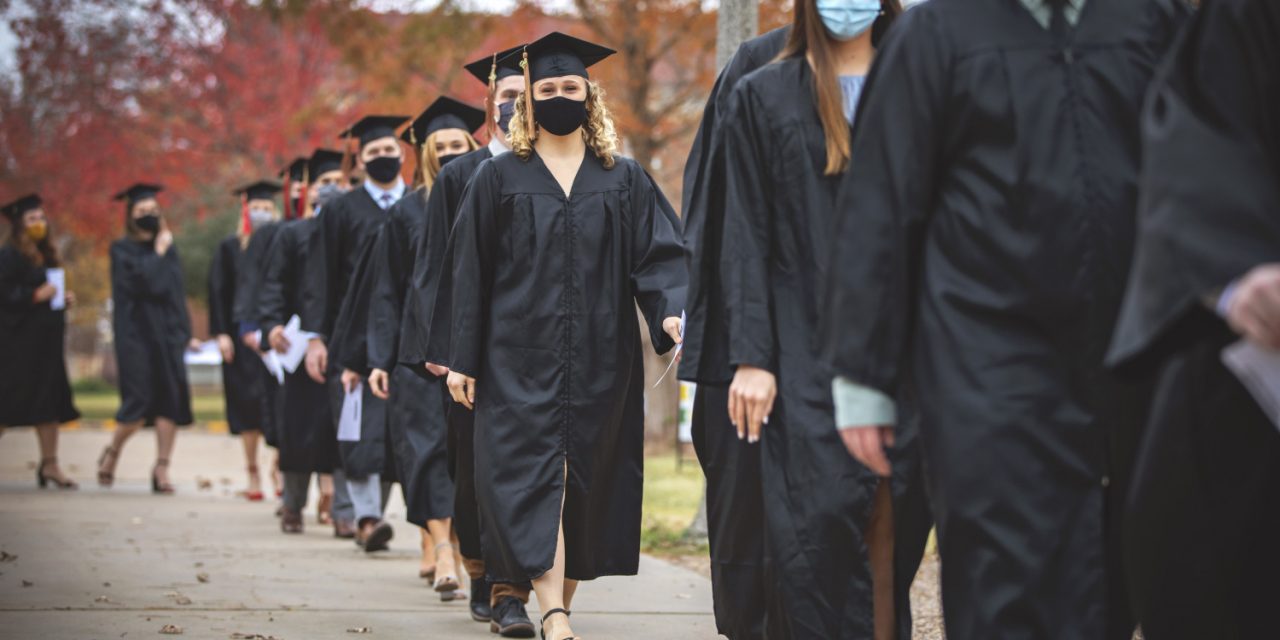 Keeping with tradition, graduates took their ceremonial final walk across campus as OBU students before filing together into Raley Chapel. The graduating students, dressed in academic regalia, passed by a row of OBU faculty members and administrators before reaching the east steps of Raley Chapel. 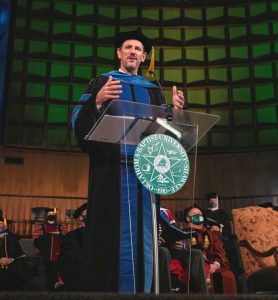 Paul Chitwood, president of the International Mission Board, delivered the commencement address during the 9 a.m. and 11 a.m. ceremonies. OBU photos by Heather Hamilton.

Paul Chitwood, president of the International Mission Board (IMB), delivered the commencement address during the 9 a.m. and 11 a.m. ceremonies. Chitwood has served as president of IMB since 2018. He previously served as executive director of the Kentucky Baptist Convention. He has also served as a pastor for many local churches. He earned both a Ph.D. and a Master of Divinity from Southern Seminary and served as a faculty member between 2002 and 2018. He is currently pursuing a master’s degree in nonprofit administration from the Mendoza College of Business at the University of Notre Dame.

Chitwood built the theme of his address around the central question, “Why are you here?”

“You’re obviously here to cross the finish line,” he said. “You did the work, you paid your dues, you refused to quit, you checked every box, and you made it to graduation. Congratulations. But why are you here?” 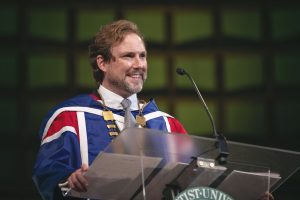 OBU President Heath A. Thomas presided over the ceremonies and delivered the charge to the graduates.

“You can live out the reason you’re here as a teacher, or a researcher, as an IT specialist, as a nurse, or in any field or calling to which you feel led to serve” he said. “How can you do that? Simply live as a follower of Jesus in whatever work you do and wherever you do it, and share Jesus in that place and with those people because that’s why you are here. And wherever you go, I assure you, there will be people who either have not even heard or simply have yet to believe the good news about Jesus.”

Graduates in the 2 p.m. ceremony heard from Nathan Mellor, CEO, author and executive coach. Mellor is the CEO of the Oklahoma City based Strata Leadership, LLC. He is an adjunct professor in OBU’s MBA program and previously delivered a Minter Lecture on the OBU campus in 2015. Mellor earned both a Master of Science in education and a Bachelor of Arts from Harding University. He also earned a Master of Dispute Resolution from Pepperdine University School of Law and a Doctor of Education in organizational leadership from Pepperdine as well. 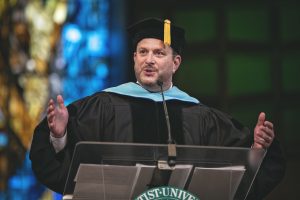 “I would ask you today to consider what you need to stop believing about yourself to be able to move forward in life,” Mellor said. “Now in our heads, you can imagine it like a big box in the middle of your head, it’s a collection of all of the stories you’ve believed about yourself and about the world. But what happens is we’ll have these stories in our head that we are using to give some type of instruction to us about how life should work, but here’s what can occur. We can believe stories about ourselves that were perhaps never true or they are no longer true. And today, on this graduation, I’m asking you what you need to stop believing as you walk out of this graduation so you can begin a new life.

Mellor encouraged the graduates to persevere. 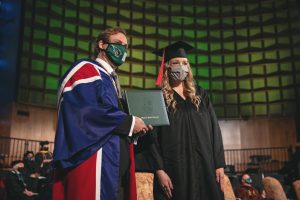 Abby Black, graduating senior in communication studies from Ardmore, is congratulated by Thomas.

Mellor concluded with an inspirational challenge to the graduates.

“There is a desperate need for people who choose to live intentionally, because the world needs hope, and because of that, the world needs you,” he said. “Choose to make a difference.”

OBU President Heath A. Thomas delivered the charge to the graduating class during each of the three commencement ceremonies.

Thomas called the graduates to use their knowledge learned and wisdom gained as OBU students to impact the world.

“Take these lessons,” he said, “these lessons that I’ve been speaking about, take the learning that has equipped you to do what you are doing, take the skills, the virtues, the dispositions you have gained here, and live them out loud in our world.

“We need your influence. We need your voice. We desperately need your voice. From Bison Hill, I charge you—go into our world. Don’t sit on the sidelines. Make a difference. Be a positive agent of change in the communities that God takes you. Go and serve your community. Go and serve our Lord. You have been equipped. So, as Mother Teresa used to say, ‘Go do something beautiful for God,’ and I’ll just add this…I dare you.”