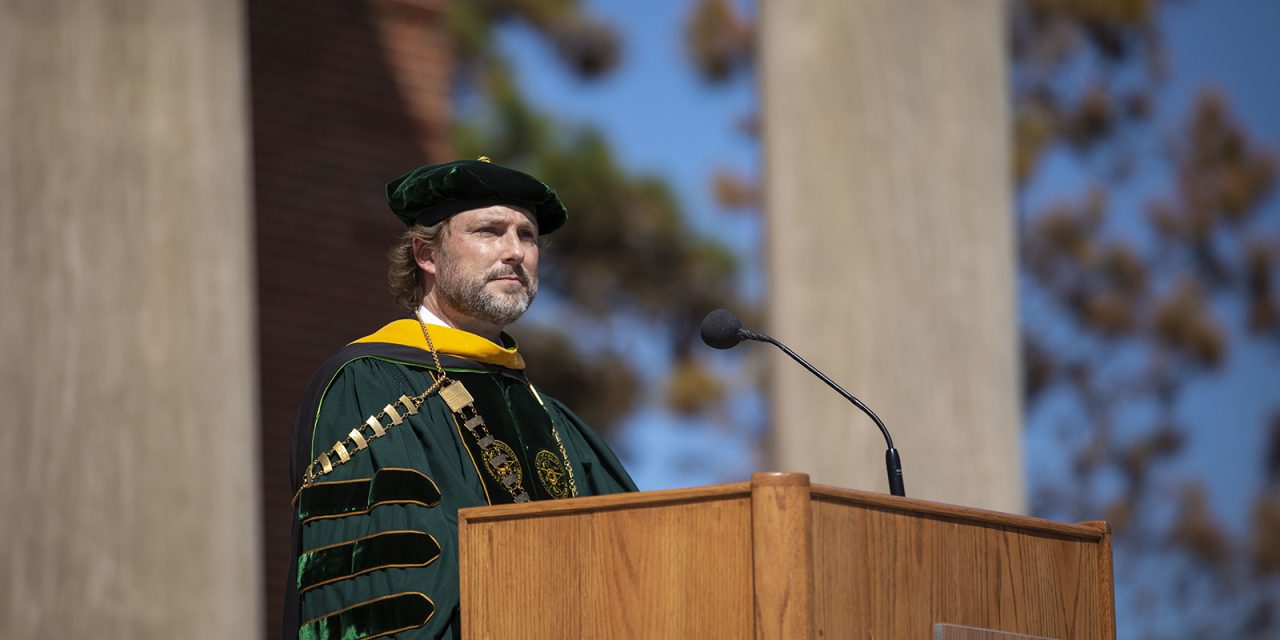 SHAWNEE—Oklahoma Baptist University (OBU) inaugurated Heath A. Thomas as the University’s 16th president during a special inauguration ceremony Friday, March 26, at 2 p.m. The event took place outdoors on the south lawn of Raley Chapel. Thomas took office as OBU president Jan. 1, 2020, but inaugural activities were delayed until this year due to the COVID-19 pandemic. 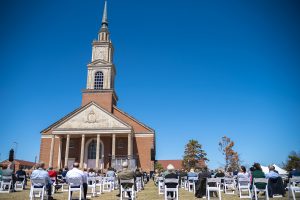 Faculty, staff, students, alumni, delegates and other guests watched the ceremony from physically distanced chairs on the south lawn of Raley Chapel. Photos by Heather Hamilton

Hundreds of students, faculty, staff members, administrators, alumni, delegates and guests attended the physically distanced ceremony. Face coverings were worn by those in attendance, and special precautions were taken for the health and safety of all in attendance.

The OBU Symphonic Winds Brass Ensemble delighted guests by performing for the processional and recessional as well as playing two hymns during the service, “A Mighty Fortress is Our God” and “Come, Thou Fount of Every Blessing.” They were joined by Chris Mathews, dean of the Warren M. Angell College of Fine Arts, to lead the singing of the hymns. The ensemble consisted of eight OBU students, including Mary Katherine Krempl, Micah Hinson and Parker Snider on trumpet; Thomas Peercy on horn; David Carey, Colton McCall and Garrett Lincoln on trombone; and Riley Davenport on tuba. 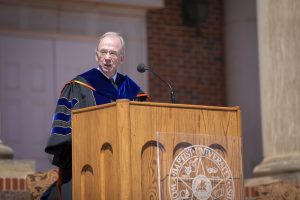 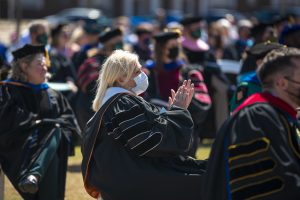 OBU faculty were well represented at the inauguration.

Dockery is the founding president of the International Alliance for Christian Education and a renowned Christian higher education leader. In addition to serving as president at IACE, he also serves at Southwestern Seminary as distinguished professor of theology, editor of the “Southwestern Journal of Theology,” special consultant to the president and theologian-in-residence. He previously served as president of Union University for nearly two decades and served for more than five years as the 15th president of Trinity International University/Trinity Evangelical Divinity School. Prior to his service at Union and Trinity, he served as the chief academic officer at Southern Seminary, where he also held a tenured faculty position in theology and New Testament. 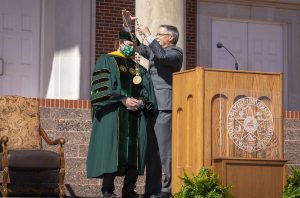 Sam Garlow, chair of the OBU Board of Trustees, invested Thomas with the OBU presidential medallion.

“It’s a high honor to be part of such a wonderful heritage, Mr. President,” Dockery said. “I am confident that you will provide the kind of faithful, strategic and wise leadership that will be needed during these incredibly challenging times in Christian higher education. OBU is blessed with a treasured heritage and I believe OBU’s influence in this region, in Baptist life, and throughout the country will only be expanded and extended under President Thomas’s leadership.”

Dockery offered several key points of advice to Thomas. He encouraged him to celebrate this special week and take in all of the encouragement and support he receives. Dockery also challenged him to take the encouragement received today and give it away to others across the OBU community. He then suggested that Thomas embrace the multifaceted expectations, challenges and demands that will come his way as president, build a strong leadership team, and listen to others across this campus, even his critics.

He likewise offered three distinct points for the OBU community, encouraging the broader community to seek a purposeful connection and partnership with the Baptist and evangelical churches in this region and across the nation. He also encouraged the OBU community to maintain a high priority on the primary aspects of the Christian faith. He then challenged the community to “renew OBU’s commitments to truth, made known in God’s book of natural revelation and his book of special revelation.” He noted that “leading a new generation of OBU students to these commitments will for them be intellectually and personally enjoyable, engaging, imaginatively compelling as well as spiritually nurturing.”

Before Thomas delivered his inaugural address, Sam Garlow, chair of the OBU Board of Trustees, gave the investiture and charge, investing Thomas with the medallion of the OBU president.

“As we present the seal of the University to you today, I charge you on behalf of the many constituents of this great institution to be steadfast in the exercise of your responsibilities; to be loyal to the heritage and tradition of OBU; and to be motivated by a vision of excellence in all your endeavors,” Garlow said. “Furthermore, I charge you to keep OBU grounded in its mission to provide outstanding and distinctive Christian higher education, to keep OBU faithful to the Gospel of Jesus Christ and to the Word of God, and to continue the important work of preparing students to be agents of transformation in their disciplines and in their service to God.”

Thomas then delivered his inaugural address.

He then discussed the University’s founding in 1910 and the forward-thinking vision of those who established The Baptist University of Oklahoma 111 years ago.

“These future-shapers were forward-thinking prophets. They recognized the uncompromising necessity for Christian education that would raise up next generations…next generations of leaders for the glory of God; indeed, for the good of the world. OBU’s voice in the chorus of higher education indeed will ring out, but it will ring out with the organizing principle of Jesus Christ, and the promise of Christian higher education for the glory of Christ and the good of our world.”

He next examined how the strength of Christian higher education at OBU comes from placing Christ at the center of all truth.

Thomas concluded with a message of encouragement and hope for the bright future ahead for OBU, its students and alumni, and those who will walk its halls in the future, seeking the eternal, life-changing truths of OBU’s distinctively Christian liberal arts higher education.

“My friends, we have hope today. I ask you to join with me in embracing the promise and the hope of Christian higher education at OBU. Our hope is in the center, who is Jesus Christ. Our hope as a university lay centered in the philosophy of the cross. In the love that Christ calls us to. In the hope that Christ calls us to and the peace that we provide in our communities and around the world.”

Thomas was selected as the University’s 16th president by the OBU Board of Trustees in November 2019. Prior to assuming his duties as president, he served as dean of the Hobbs College of Theology and Ministry and associate vice president for church relations, as well as the Floyd K. Clark Chair of Christian Leadership and professor of Old Testament. He joined the OBU faculty in 2015 after serving as director of Ph.D. studies and associate professor of Old Testament and Hebrew at Southeastern Baptist Theological Seminary in Wake Forest, North Carolina.

A 1998 OBU graduate, he earned a Bachelor of Arts in English literature with a religion minor. He then earned a Master of Arts in theology from Southwestern Seminary and a Ph.D. in Old Testament from the University of Gloucestershire (UK). He earned a certificate for leadership in higher education from Baylor University in 2016. He has served on staff at churches in Oklahoma, Texas, North Carolina and in the United Kingdom. He preaches and teaches regularly and has served as interim pastor for several Oklahoma churches during his time at OBU.

Chris Mathews, dean of the Warren M. Angell College of Fine Arts, led the singing of “The Hymn to the Alma Mater” before Jay Strack, president of Student Leadership University, concluded the ceremony with the benediction.

Watch the inauguration ceremony at okbu.edu or on the OBU YouTube channel at youtube.com/user/OBUnews.