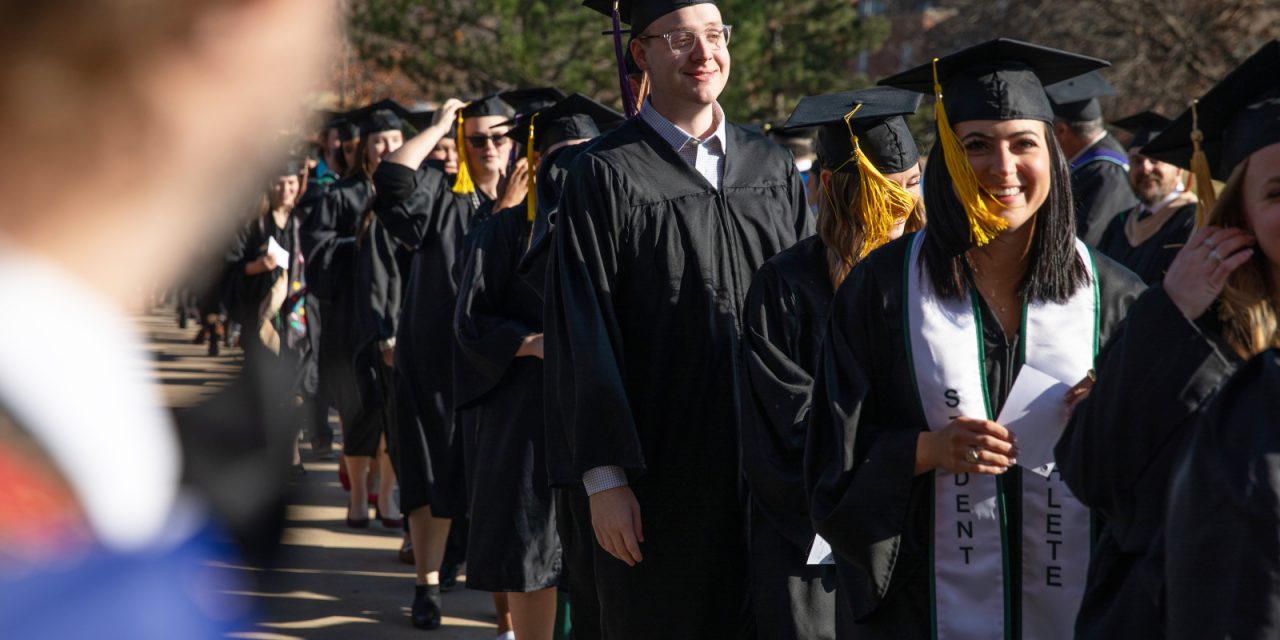 Above: Graduates took their ceremonial final walk as OBU students before filing into Raley Chapel, passing between two lines OBU faculty and staff members before arriving in Potter Auditorium for the commencement ceremony. OBU photos by Clinton Sinclair. 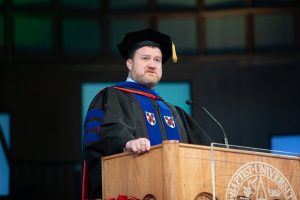 Graduates took their ceremonial final walk as OBU students before filing into Raley Chapel. The students, in academic regalia, passed between lines of OBU faculty and staff members near the east steps of Raley Chapel before arriving in Potter Auditorium for the commencement ceremony. Annie Keehn, assistant professor of natural science, then opened the ceremony with the invocation.

OBU President Heath A. Thomas presided over the ceremony and welcomed guests. Joe Ligon, interim executive director-treasurer and senior associate executive director of Oklahoma Baptists, delivered a greeting from the state convention. Following a hymn and scripture reading, graduating senior Harmony Dewees, vocal performance major, then sang “It Is Well with My Soul.” 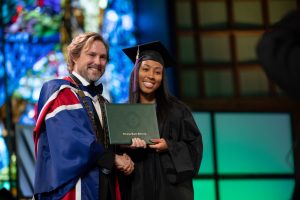 Fisher has served as the senior pastor of Shawnee, Immanuel since 2003. He has 30 years of pastoral experience and has served in a number of leadership roles in Southern Baptist life, including his recent term as president of Oklahoma Baptists. He has taught for OBU, Southern Seminary and Southwestern Seminary. He has also served on various boards, including as chair of the Southern Seminary board.

Fisher has spoken on Bison Hill on numerous occasions. Earlier this semester, he spoke at OBU’s Pastors Conference during homecoming in October. He also delivered the message during the annual Founder’s Day chapel in 2019. He previously delivered a commencement address at OBU in December 2011.

Fisher encouraged the graduates to hold fast to their faith and proclaim the Gospel of Jesus Christ, wherever their lives take them following their time on Bison Hill.

“Graduates, as you leave to pursue your goals, your dreams, your calling,” he said, “I challenge you to be in mission mode. As followers of Christ, God has called you to the mission of reaching the world and piercing the darkness with the Gospel of Jesus Christ.

“It will be impossible for you to fulfill this mission if your approach to life looks more focused on itself rather than focused on God and serving others. So, my admonition to each of you graduates is to employ your lives, your gifts, your resources in serving the Lord Jesus and your fellow man.”

Fisher then examined one of the greatest biblical examples of a person living their life in service, the Apostle Paul. He shared from Acts 28:30-31 and discussed how Luke described the two key focuses of Paul’s life, a focus on loving people and a focus on the gospel of Jesus Christ.

“Paul incorporated each of these things as he diligently lived serving, rather than being served” Fisher said.

He then challenged the graduates to consider how they will invest their lives.

“So, I would propose to each of you that if the focus of your life has something like the focus of Paul’s life, then your life will be well spent. Whatever it is that you will be doing, you will spend your life in the best way you can if you are spending it serving the Lord and others.”

Fisher congratulated the graduates on their accomplishment while also encouraging them to keep their faith in Jesus as the primary focus of their lives, both now and in the future.

“Graduates, today is your day and you are to be congratulated, as you should be. This is a crowning achievement in your lives, and your families are proud of you, as they should be. Yet, in the midst of all of the accolades today, I want you to remember that you are followers of the King Jesus, and as such, we understand that life is not about ourselves.”

Thomas then delivered a presidential charge to the graduates before the conclusion of the ceremony.

“From this day forward, you carry a special distinction,” Thomas said. “You are alumni of Oklahoma Baptist University.”

“You have been afforded a world class education,” he continued. “You’ve been shaped, you’ve been formed in a way that I would argue is utterly unique. So, this is a special distinction that you will carry for the rest of your life.”

Thomas encouraged the new alumni to cherish their faith in Jesus for the remainder of their lives, allowing the Lord to work in and through them wherever they go.

“My prayer as your president is that you allow the Lord Jesus unmitigated permission to work through your life so the world might be changed. And don’t let anyone tell you any differently, you graduates are fundamentally agents of transformation and good in our world.

Thomas then delivered his final charge to the graduating class of 2021.

The president’s charge was followed by “The Hymn to the Alma Mater,” led by James Vernon, chair of the Division of Music. Gary Rhodes, professor of media production, then delivered the benediction.