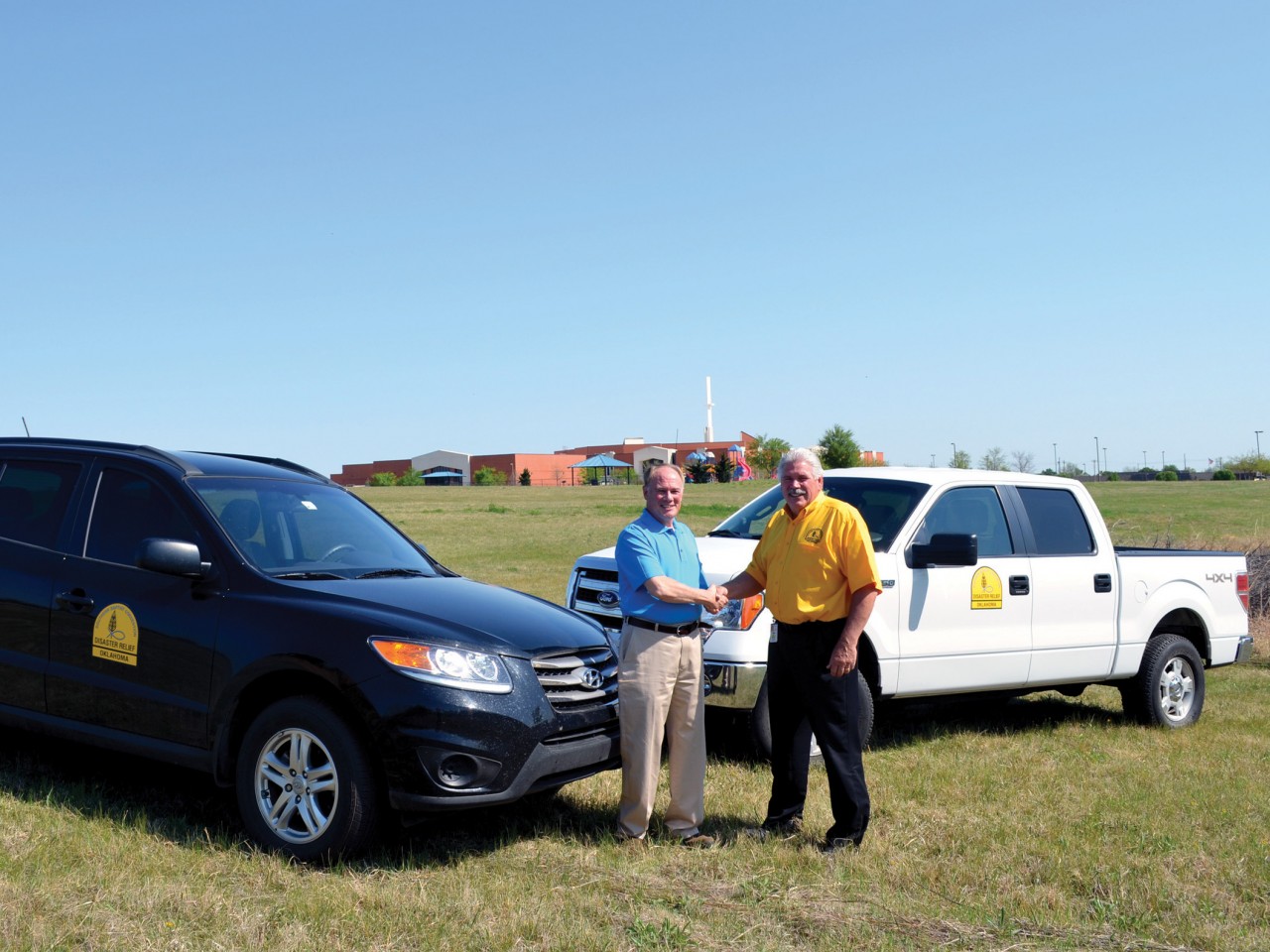 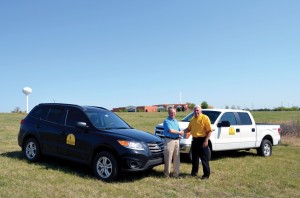 Moore, First Pastor Kevin Clarkson and BGCO Disaster Relief Director Sam Porter meet at the future site of the DR facility, with the church shown in the distant background.

MOORE—For 15 years, Sam Porter has dreamed of having a place to call home . . . for the Baptist General Convention of Oklahoma’s (BGCO) disaster relief fleet.

Now, thanks to the generosity of the congregation at Moore, First, that long dreamed of and prayed for vision will become a reality in the not-too-distant future.

In a unanimous vote April 13, members of Moore, First agreed to donate five acres of the church’s nearly 75-acre site to the BGCO. The plot is located at the extreme northwest corner of the church’s property, alongside the access road to I-35 and just north of N.E. 27th St.

“We have been living on borrowed land, and we have been parking our equipment there since 1998. When we started, we had one truck, one child care trailer and a travel trailer. Now we have 19 chain saw trailers, 18 feeding units, plus the big semi feeding unit.”

Of course, not all of that equipment is stored at BRT, but the growth of the DR fleet is self evident.

“There are two semis and our mobile command bus, a two-ton truck and at least 12-15 other types of trailers that house water, feeding, chain-saw, ash out and mud out units out there,” Porter said. “The only thing that fits in the building are two semi trailers, one tractor and the mobile command center. Everything else has to sit outside right now. 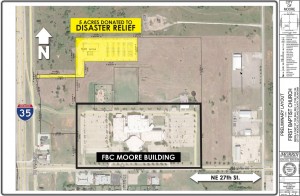 A site map denotes where the donated five acre plot is located along I-35 and north of NE 27th St. in Moore.

“One of the things we have needed more than anything is warehouse space. We have offers of huge donations of goods and tools, especially after catastrophic disasters, and I have to turn them away because we have no place to store them.”

The gift of land will pave the way for the BGCO to build a fully-functional disaster response and training center.

“We’ll house our offices and all of our equipment there, and do our training there,” Porter explained, his voice rising in anticipation. “We will be able to house volunteers when we have a disaster in the Oklahoma City metro area. It will be where we operate from; we’ll have warehousing there when we do receive donations.

But, the reality is still not going to come to fruition without some hard work to come.

“We’ll try to erect about a 15,000-square-foot building, and it’s going to cost a lot of money to do that. The gift from Moore, First is worth a fortune, but it will cost us, we’re guessing between $3 million-$4 million to complete our facility.”

Porter said a capital fund raising project will be launched to raise the money necessary to pay for the facility, probably some time after Jan. 1, 2015.

But, he hopes in the meantime to at least put up an electronic sign touting where Oklahoma Southern Baptist disaster relief is at work.

“We never spend money on advertising, but we want to put a sign up so we can tell every day, 24-seven, what Oklahoma Baptist Disaster Relief is doing and where we are doing it. If we’re in the Philippines, in Haiti or wherever. It will tell the 200,000-300,000 or so people who drive by that location every day what we are doing,” Porter said.

“It’s been my dream and vision for Oklahoma Baptists to have a property along a major highway to tell our story; we’re always the first to respond. Craig Fugate, the head of FEMA, says on a regular basis if it wasn’t for Southern Baptist Disaster Relief, we couldn’t do national disasters.”

Moore, First Pastor Kevin Clarkson said the gift was, “bathed in prayer and stemmed from a message BGCO Executive Director-Treasurer Anthony L. Jordan gave at the 2012 BGCO Annual Meeting, and we became aware of the need.

“We’re fortunate to have the land that was undeveloped, and it’s going to work well for the needs of the disaster relief crew and give them easy visibility and access to the Interstate.

“We prayed through it, brought it to our steering committee, had several meetings with our legal counsel and went over some drawings of our property and made sure of zoning issues.

“Then we just felt good about it, and when we brought it to the congregation, it was a unanimous vote. I think our church—maybe because we host the conventions and other meetings frequently—has a real appreciation for the Convention and obviously supports the Cooperative Program at a strong level.“

The pastor said he thinks Moore, First’s attitude is an example of that which basically permeates the Convention.

“I commented to somebody within the last few days that  Oklahoma has always had such a unified heart and rallied together around our mission and our love for God and His Word. It’s a great place to serve the Lord.

“Our belief is that as we bless others, God will, in turn, bless us in many ways. We have been blessed, and we’re going to continue to bless others and get blessed back. So, it just goes on.

“We’re excited about this development, and I think we’ll be even more aware week-by-week now of what they’re (DR) doing. We have some DR volunteers in our church, and just having their presence on our land and having the sign will increase our awareness even more and, therefore, our connection and our prayers.”