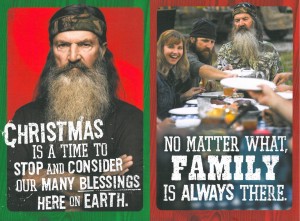 The president of the Ethics & Religious Liberty Commission reacted to A&E’s Wednesday (Dec. 18) announcement that it had suspended Robertson indefinitely for comments he made in an interview with GQ magazine. The network’s statement seemed to indicate the action was taken because of his description of homosexual behavior as sinful.

The article says Robertson continued by paraphrasing 1 Corinthians 6: “Don’t be deceived. Neither the adulterers, the idolaters, the male prostitutes, the homosexual offenders, the greedy, the drunkards, the slanderers, the swindlers — they won’t inherit the Kingdom of God. Don’t deceive yourself. It’s not right.”

In announcing the suspension, A&E said in a statement, according to Advertising Age, “We are extremely disappointed to have read Phil Robertson’s comments in GQ, which are based on his own personal beliefs and are not reflected in the series Duck Dynasty. His personal views in no way reflect those of A&E Networks, who have always been strong supporters and champions of the LGBT [lesbian, gay, bisexual, transgender] community. The network has placed Phil under hiatus from filming indefinitely.”

In a Wednesday appearance on CNN, Moore said proposing that people “who hold to what every branch of the Christian faith has held to for 2,000 years are somehow bigoted or hateful is not productive for speech.”

Addressing A&E’s action in a blog post the same day, Moore said it is “the sort of censorious cultural fundamentalism that is neither ‘progressive’ nor ‘pluralistic.'”

Some of Robertson’s anatomical language in the GQ article was “ill-advised and crude,” Moore wrote, but the comments “that seem most offensive to people are his moral assessments of sex outside of conjugal marriage. … As Christians, we believe that Jesus is lord over sexuality, and he says that sexuality is expressed rightly only in the marriage of a man and a woman. That’s not new.

“Let’s have the sort of cultural conversation that allows us to seek to persuade each other, not to seek to silence one another with intimidation,” Moore wrote. “That’s what real diversity is all about.”

Moore’s blog post on the controversy quickly became popular. Posted at 8:30 p.m. CST Wednesday, it had recorded 215,000 page views and been shared on Facebook 22,000 times by noon Thursday.

Robertson released a statement through A&E Wednesday, saying, “I myself am a product of the 60s; I centered my life around sex, drugs and rock and roll until I hit rock bottom and accepted Jesus as my Savior. My mission today is to go forth and tell people about why I follow Christ and also what the Bible teaches, and part of that teaching is that women and men are meant to be together. However, I would never treat anyone with disrespect just because they are different from me. We are all created by the Almighty and like Him, I love all of humanity. We would all be better off if we loved God and loved each other.”

Duck Dynasty is a highly successful reality show for A&E, breaking the record for the largest audience for a non-fiction cable television program when August’s season premiere drew 11.8 million viewers. It features Robertson and his family as well as their hugely profitable business, Duck Commander, which makes duck calls and other products in West Monroe, La.

LGBT rights organizations criticized Robertson’s comments when the GQ article, which is in the January 2014 issue, was released online.

Wilson Cruz, an actor and spokesman for GLAAD, called for A&E to condemn Robertson’s comments. “The world is changing. The country’s changing. And even the state in which Mr. Robertson lives is changing. And he needs to get in line,” Cruz told CNN Wednesday.

GLAAD also described Robertson’s comment about the sinfulness of homosexual behavior as “far outside of the mainstream understanding of LGBT people.”

Though evangelicals probably will have concerns about the graphic nature of some of Robertson’s comments and his decision to cooperate with GQ, Mohler wrote in a Thursday blog post, “[T]he fact remains that it is the moral judgment he asserted, not the manner of his assertion, that caused such an uproar. A quick look at the protests from gay activist groups like GLAAD will confirm that judgment.

“So the controversy over Duck Dynasty sends a clear signal to anyone who has anything to risk in public life: Say nothing about the sinfulness of homosexual acts or risk sure and certain destruction by the revolutionaries of the new morality. You have been warned,” Mohler said.

Robertson has shared the testimony of his conversion to Christ widely, and he and other family members speak regularly at churches and Christian conferences. The TV episodes typically close with a prayer as family members and friends gather around a table for a meal.

Robertson’s faith and evangelism are reflected in the GQ article. Magary reports Robertson telling him:

“If you simply put your faith in Jesus coming down in flesh, through a human being, God becoming flesh living on the earth, dying on the cross for the sins of the world, being buried, and being raised from the dead — yours and mine and everybody else’s problems will be solved. And the next time we see you, we will say: ‘You are now a brother. Our brother.’ So then we look at you totally different then. See what I’m saying?”

In a testimony for “I Am Second” videos, Robertson explains what happened when a man explained the Gospel of Christ to him when he was a young father whose life was mired in alcohol, drugs and adultery:

“So when he went through Jesus coming down in flesh through a little virgin girl, Mary, dying on a cross, being buried and raised from the dead, I’m like, ‘How in the world did I ever miss that?’ I had missed it.

“I was blown away when I heard that Jesus died for me, was buried and raised from the dead — something so, it is simple, but profound, that happened back there almost 2,000 years ago. I had never heard it.”

Robertson and others in the family are members of White’s Ferry Road Church of Christ in West Monroe. Robertson and his son Alan are elders at the church.

Duck Dynasty has resulted in a marketing bonanza featuring best-selling books, a Christmas CD and other merchandise. LifeWay Christian Stores, like many retailers, carries the books, Christmas CD and selected posters and apparel.

— Evan Lenow, chair of Southwestern Baptist Theological Seminary’s ethics department, said Robertson’s suspension will be a test for the rest of the family, who began the show with “three no-compromises” — “faith, betrayal of family members, and duck season.”

“The first two are now on the line for the Robertsons,” Lenow wrote in a post at the seminary’s blog, www.theologicalmatters.com. “The patriarch of the family has essentially been fired from the show for expressing his religious views. The rest of the men, including Duck Commander president Willie Robertson (one of Phil’s sons), are about to have their allegiance to family tested. Do they go on without Phil or stand by him? … I think they only have one option — walk out on the show. Sure, the show could go on without Phil, but the family couldn’t. Either Phil is a part of the show or no one is on the show. That is the only option.”

— Trevin Wax, managing editor of The Gospel Project of LifeWay Christian Resources, wrote at his blog, “Nowadays, Christians are the cultural heretics. If you believe what the Bible teaches about homosexuality, your public platform may be in danger. No matter that Pope Francis, the Dalai Lama, and every imam in Turkey believes the same thing. We’re for free speech, until it offends someone. Then we pull the plug. … I believe the Duck Dynasty suspension will backfire, and Phil’s days on the show aren’t over for good. You can’t claim the right of free speech for the obscenities of Bill Maher and then try to shut down conversation in Louisiana.”

— Denny Burk, associate professor of biblical studies at Boyce College in Louisville, Ky., predicted at his blog that Robertson’s remarks will lead to the end of the show.

“The other guys on the program will be dogged in every interview from here on out until they give their opinions as well,” Burk wrote. “And as soon as they do, the entire cast will [be] branded heretical by the sexual revolutionaries that dominate popular culture. When that happens, that will be the end.

“What happens now? There will be a virulent outcry from the left (facilitated by the media) until Duck Dynasty disappears from television. There will be a firestorm of controversy, but the demise of the Duck Dynasty program is the inevitable endgame. I hope I’m wrong.”

— Doug Napier, senior vice president of Alliance Defending Freedom, said in a news release, “This move is more evidence of the one-sided censorship of the cultural and political elites outraged by such a basic teaching. A&E, as a media outlet, should understand better than most the free marketplace of ideas. The self-appointed speech police rallying behind A&E don’t believe in the free marketplace of ideas and have no tolerance for any beliefs other than their own.”

— David Mathis, executive editor of Desiring God in Minneapolis, provided a contrasting viewpoint, saying this is not a fight evangelicals should participate in.

“There will be real battles to fight — real courts and real judges and real presidents, governors, and legislatures that will continue riding the societal wave of the LGBT agenda,” Mathis wrote at the Desiring God blog. “As the seemingly unstoppable train barrels down the tracks at us, we will continue to face excruciatingly tough decisions about when and how to hold our ground and when and if to dive out of the way and live to fight another day.

“But this is not it. This is cable television. This is a silly show that, while genuinely entertaining, is doing just as much to marginalize Christians as backwater as it is getting the name of Jesus on television — as if that was ever the tip of the spear for the Great Commission, anyway.”