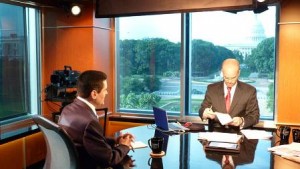 WASHINGTON (BP) — American evangelicals’ view of themselves should resemble more closely that held by the church in the first century than that held by Christians in recent decades, Southern Baptist ethicist Russell D. Moore said in a nationally televised interview.

Moore, in an appearance on C-SPAN’s “Washington Journal” Monday (July 8), said there was a message for evangelicals and other social conservatives in the U.S. Supreme Court’s invalidation of a federal law defining marriage as only between a man and a woman.

“For a long time, social conservatives in America had a kind of silent majority view of ourselves, and conservative evangelicals and conservative Roman Catholics had a moral majority view of ourselves, as though we somehow represent the mainstream of American culture — most people really agree with us except for some elites somewhere,” the president of the Ethics & Religious Liberty Commission said. “That really isn’t the case.”

Instead, Moore said, Christians “need to start seeing the fact that we’re very similar to the way the Christian church was at the very beginning of its existence — a minority of people who are speaking to the larger culture in ways that are going to sometimes seem freakish to that larger culture. I don’t think that’s anything that should panic us or cause us to become outraged or despondent. I think it’s a realistic view of who we are.”

Asked about the church and politics, Moore said Christians need to find a path between two erroneous approaches.

“[T]he church can become a political action committee in a way that detracts from the mission of the church and destroys the mission of the church,” Moore told C-SPAN host John McArdle. “But I think there’s also a way in which the church can stand back and say, ‘We don’t speak to anything that we believe to be political,’ which really means the old question that the Scripture gives us: ‘Who is my neighbor?’ If we care about our neighbors and if we care about our society, then we have to speak to those things that are for the common good and are for human flourishing.”