As a result, 18 people in this southwest Oklahoma town of 2,700 have a new relationship with Jesus Christ after 134 individuals representing 17 churches blanketed the community through an outreach/service effort called Mission: Walters.

Lest one think Mission: Walters was a “Let’s get together and do some stuff for some people” effort, Stillwell, pastor of Walters, First, is quick to point out that the groundwork for it was months in the making and the preparations were intense.

“This was the culmination of more than a year of planning, coordination and training,” he said. “All glory goes to God for this wonderful opportunity, Who gave us this vision after multiple short-term foreign mission trips to Third World and developing countries such as Nicaragua, Brazil, Mexico, through the Baptist General Convention of Oklahoma’s (BGCO) Guerrero partnership) and India.

“We asked, ‘Could we do this here at home? Could we replicate what we do abroad right here in our own back yard?’ The need was evident before, but now God has opened our eyes more clearly to the opportunity before us. Our church has been forever changed. Our members have been transformed as they have become even more compassionate and sincerely sensitive to the needs and hurts of our neighbors.”

Preparing the soil for the event included door-to-door visits to every home in Walters over the past several months, the pastor said. 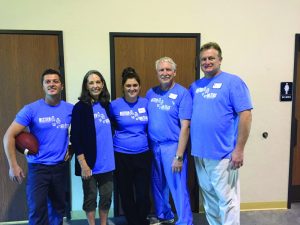 “We have been going door-to-door, meeting our neighbors, hosting block parties, backyard cook-outs, and ice-cream socials,” Stillwell revealed. “We just want them to know that God loves them, and we love them. Every home in Walters received at least one visit during our preparation.

“We have seen Sunday School classes and departments transformed as a result of this effort. We hoped to be a part of God’s transforming work in our community. In the process, God has transformed us. He has made us more compassionate and sincere. He has taught us the difference between projecting ‘the appearance of religious works,’ and truly reflecting His love and grace to those around us. It is all of Him, and He deserves all glory, honor and praise.”

• 219 recipients of food, clothing, furnishings, etc. from a “General Store.”

• 42 patients seen at a dental clinic, where more than 60 extractions, 10 multi-surface fillings, three cleanings and five bone-reduction surgeries were done.

As a result, 284 adults, plus multiple children, heard the Gospel clearly presented, he added, with 18 first-time professions of faith.

“Also, there were 35 service projects performed throughout Walters that included everything from light construction, such as wheelchair ramps, front porch decks, roof repair and drywall installation, to mowing and general clean-up,” Stillwell added. “Each resident receiving the blessing of service project work also heard the Gospel presented and was given an opportunity to respond.”

“The cooperative effort of BGCO churches from across the state was essential to Mission: Walters. So many churches and pastors were willing to take a few days away from their local mission field to come and serve here,” Stillwell marveled. “That is no small sacrifice. We all have plenty of work to do in our own backyards. However, when Oklahoma Baptists come together from across the state, it is amazing what God does in our midst. I hope that we will see more opportunities in the future to serve shoulder-to-shoulder in similar statewide efforts.”

He also expressed appreciation to support from BGCO staff. 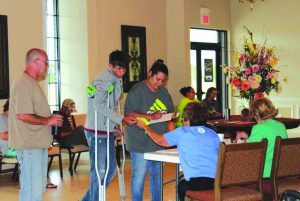 Stillwell said his congregation is a changed body of Christ after Mission: Walters.

“Our members responded gloriously to this effort. They saw the vision, and they embraced it. Our members were “all in” from the start,” he said.” They walked by faith, demonstrated initiative and trusted God to fulfill His vision through them. I cannot say enough about how thankful I am to serve alongside each of them. It is a privileged honor to serve a church that is so unified by God’s Holy Spirit to fulfill His Great Commission to make disciples. And, they have done it joyfully, sincerely seeking to love God and love their neighbors as themselves. What a great church! I am a blessed pastor!”

Church Secretary Deborah Wall, may have said it best: “Of all my years of knowing and serving Christ, this has been my most tangible experience of being the hands and feet of Jesus.”