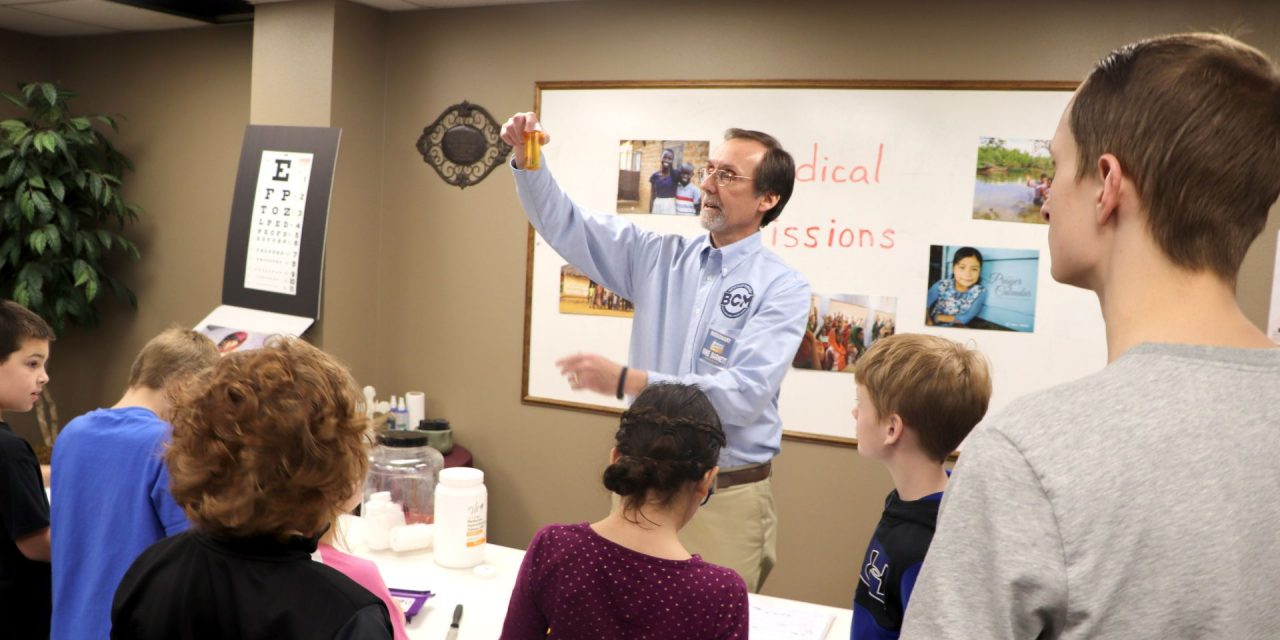 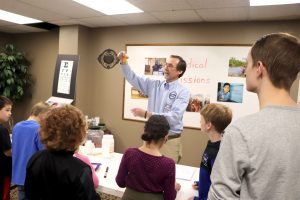 Mike Barnett shares with children the importance of medical missions during the 2020 Mission Ignition event.

Oklahoma Baptists are familiar with Baptist Collegiate Ministries (BCM), previously known as Baptist Student Union. They were involved during their college years, or they have heard stories of college students having life-changing experiences through BCM at the many colleges across the state.

Life-changing experiences even happen among medical students at the University of Oklahoma Health Sciences Center (OUHSC) in downtown Oklahoma City. At a time when people are on high alert regarding health conditions, Oklahoma Baptists can appreciate the influence BCM has on those preparing to go into the medical field.

A mainstay with the BCM at OUHSC is Mike Barnett who was recently recognized for serving as BCM director of OUHSC for more than 40 years. Barnett’s story is worth sharing, as is a report of the impact BCM continues to have at OUHSC. 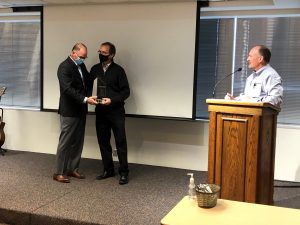 ‘More than 90 years’ of ministry impact

Barnett said he heard reports of BCM being at OUHSC as early as the 1930s. Many among the administration over the years have told him they used to attend BCM lunch gatherings and Bible studies.

“A lot of the department heads came to BCM as students,” Barnett said. “And even those who were not here for training, when they found out there is a Christian organization on campus, they just jumped right in. We have such a rooted group of believers among the leadership, and they are supportive of BCM.”

BCM has brought the Gospel to medical students and helped them grow in their faith, especially in a field that is not as open to Christianity. Over the years, Christian doctors have come to speak at BCM gatherings at OUHSC and have encouraged medical students to advance the Gospel.

“To be able to capture people during that time (of medical training) and let them hear from doctors and professionals who can say ‘Here’s how I live out my faith,’ this influence is huge,” said Cris Lowery, Oklahoma Baptists state collegiate ministries director. “It is important for (medical students) to realize it’s not one or the other. They can be both scientific and a spiritual person.” 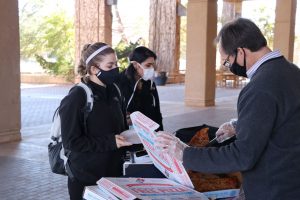 Barnett’s ministry starts with offering free lunches to med students. From there, he connects with the students through the noontime interactions.

“I begin to learn the needs of medical students and dental students as they are going through their training and find ways to encourage them in their spiritual life,” Barnett said. “As they find their identity in Christ, we offer them mission opportunities, ways they could be involved in ministering to their classmates and doing missions locally or internationally.” 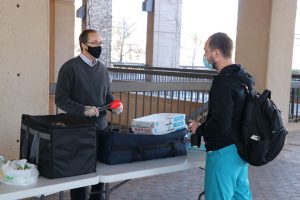 Barnett serves lunches to medical students outside the OUHSC library

Locally, Barnett takes medical students to serve in a free weekly clinic. Internationally, OUHSC students have been on more than 30 medical mission trips through BCM, usually during Spring Break.

“We’ve gone to Mexico many times,” Barnett said. “We went to Peru, Panama, Guatemala and other places where we could find missionaries who needed medical missions. We always heard from missionaries that if you come with the Gospel and medical or dental services then people were a lot more apt to come and be involved.”

Missionaries build rapport in their communities through medical mission work. This is the impact medical students have by going on trips offered through the BCM at OUHSC.

BCM during the pandemic

Since the COVID-19 pandemic started in 2020, Barnett has been limited in connecting with students. OUHSC had to limit access on campus, so free lunch offerings were not allowed in the buildings.

Barnett had to be creative. Since last spring, he has set up tables outside the campus library every Tuesday at noon. Sometimes weather is not cooperative, but the library has an extended covering that allows students to be out of the elements.

They can grab pizza or a sandwich on the go, and then meet other students somewhere on campus to eat. If they are close by, Barnett may have opportunities to connect with the students.

Recently, Barnett had leftover pizza from a lunch offering. As he was taking the food back to his car, he asked somebody nearby if they would like some pizza. The man responded, “Mike! Is that you?”

Because the man was wearing a mask, Barnett did not recognize him. The man pulled his mask down to reveal he was a dental student back in 2008 whom Barnett remembered. He told Barnett he is now a faculty member.

“I’ve been here since June and was wondering if the BCM is still going on,” the man told Barnett. “I’m so glad I saw you, and I want to get back involved and pour into these students.”

Though the pandemic may have limited ministry opportunities, God is still using BCM to have an impact.

How Barnett started in BCM work

In 1978, Barnett started serving in BCM at the colleges in the Oklahoma City area. In 1980, he became the BCM director at OUHSC, as well as at Oklahoma City Community College and Oklahoma State University-Oklahoma City (OSU OKC).

“I was about the same age as most of the students I was ministering to,” he said. “I just jumped in there and started getting to know people.”

Barnett connected with students, faculty members and administration. God has blessed what Barnett started to the point where he continues to have strong relationships with faculty and administration at OUHSC. But he also has impacted many other BCM directors.

“When I think about Mike, he has inadvertently trained a pretty good number of BCM directors,” Lowery said. “He supervises the OKC metro right now and has done that off and on for years. Guys like John Wilkerson, who is at OSU, would credit most of what he has learned to Mike Barnett. That is one of the quiet, silent ways that he has impacted every BCM around the state, just by the people who have gone through his ministry.”

When asked if he had any medical training, Barnett responded, “Yes, I married a nurse.” His wife Rhonda has had many stops in her career, including 20 years at OU Medical Center. He appreciates how God brought them together and how they share a professional connection of ministry and the medical field. And Barnett knows the medical field can be a powerful avenue for advancing the Gospel.

“One of the things that is documented evidence is when a physician comes to meet with a patient,” Barnett said, “if (the doctor) will address spiritual matters, especially to patients who are in great medical need, about 45 percent of patients will have a greater outcome than if (doctors) did not address their spiritual life along with their physical needs.”

The number of students Barnett has encouraged over the years is countless. Both current students and alumni could talk about his influence.

“His impact is obvious as soon as I met him,” said Devin Morales, a dental student who is a BCM officer. “He offers free lunches; he is an extra person to talk to or to counsel with. He’s always made himself available to us.”

As far as former students, Barnett shared a story of a past student at OSU OKC who asked Barnett to officiate his wedding. About 20 years later, Barnett connected with a college student who told him he knows her parents—the same couple of whom Barnett performed their wedding.

A few years later, Barnett saw the same young lady as she became a dental student at OUHSC. The student went on a medical mission trip, met a young man on the trip, and eventually Barnett officiated their wedding.

Barnett has even more stories to share, as do the many other BCM directors across the state.

Thanks to Oklahoma Baptist churches that give through the Cooperative Program, ministries like BCM are having an impact on people and are advancing the Gospel.