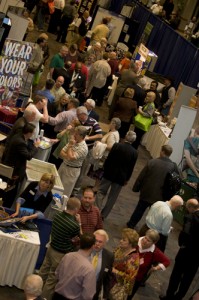 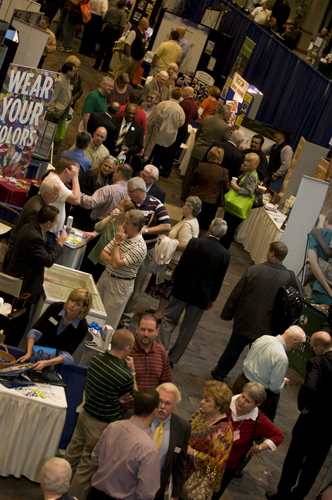 MOORE—Almost 900 messengers to the 103rd Annual Meeting of the Baptist General Convention of Oklahoma enthusiastically embraced the meeting’s theme of engaging the world with the Gospel by endorsing a new three-year partnership with East Asia as they gathered Nov. 9-10 at Moore, First.

Messengers, who officially totaled 895, also approved a $26 million Cooperative Program budget for 2010, with 60 percent to be distributed to the BGCO and 40 percent forwarded to the Southern Baptist Convention (SBC), and approved 11 resolutions. The full text of the 11 resolutions appears on page 8 of this issue of the Messenger.

Resolutions were unanimously approved unamended as submitted by the Resolutions Committee on appreciation to the host church, Christian responsibility, support of the U.S. military, the sanctity of life, the covenant of traditional marriage, Christian citizenship, recognition of state legislators, freedom of speech and biblical stewardship.

The word biblically was added in the final sentence by an amendment offered by Robin Foster, messenger from Perkins, Immanuel, to a resolution on the Cooperative Program, which was then unanimously approved, and an amendment proposed by Delmer Allen, messenger from Wilburton, Center Point, was added to a resolution on opposition to gambling, which also was then approved unanimously.

Allen’s amendment urges churches to take a “silent stand” and participate in protests against gambling on Sept. 19, 2010, which is designated as Anti-Gambling Sunday across the SBC. His amendment read, “We agree to support and promote Anti-Gambling Sunday, September 19, 2010. We further urge our churches to participate in a silent stand on that afternoon near the businesses, similar to the silent stand done on Life Chain Sunday.”

“It’s time we do more than just put this on a piece of paper,” Allen said, “and stand up and do something about it.”

In a time set aside for miscellaneous business, Allen also offered two other motions. One read: “I move that each yearly Baptist Resource Handbook contain the latest revised BGCO Constitution and Bylaws.” That motion passed with only one audible no vote.

The other, a motion concerning the semi-annual report on Cooperative Program contributions as printed in the Messenger, took almost half an hour to resolve.

Allen’s motion read as follows: “I move that churches not contributing to the Baptist General Convention of Oklahoma work during the twelve months prior to the Cooperative Program Report printed in the Baptist Messenger, whether semi-annually or annually, be taken from the list of contributing churches.”

After lengthy discussion, the motion was soundly defeated.

Sam Porter, BGCO partnership missions specialist, said the goal of the new East Asia partnership is to send between 70-100 teams from Oklahoma to the area every year. Porter said approximately 40 churches already have “come on board” as partners in the new venture. Teams ideally are designed to be around six persons in size, he said.

In line with the theme of “Engage,” BGCO Executive Director-Treasurer Anthony L. Jordan—in his annual address—said Southern Baptists are not going to have a Great Commission resurgence unless we get out of our pews and go tell someone about Jesus.

Jordan said if we aren’t careful, we are going to invest a lot of dollars in the wrong direction.
“This is not a convention made up of denomination structures, but of churches,” he said. “The greatest day is when we hit the streets and meet people who are lost. We have to get spectator Christians on the street with the Gospel.”

Jordan, claiming we have to get out of our fortresses and into the streets where lost people are, said on Sundays there are far more people in the streets, in homes, in parks than in our churches who are dying without the Gospel of Jesus Christ.

“Typically, we have said we need to get these people into church,” he acknowledged. “I find it refreshing to spend time with rank and file sinners.”

Speaking from John 4, where Jesus confronts the woman from Samaria, he noted there are people like this woman everywhere.

“Jesus said ‘I must go to Samaria,’” Jordan recounted. “Where must you go?”

He pointed out there are races and groups in every community who are ostracized, and if someone doesn’t go to them, they will never be reached for Jesus.

Jordan observed that it is easy to engage people in conversation. He told of meeting a woman on an airplane who was returning home for the funeral of her father.

“It was easy to move that conversation into the spiritual realm,” he said. “I ended our conversation by praying with her as the plane landed. She reached over and kissed me on the cheek.

“You may not settle the nation’s health care bill, but you can settle someone’s eternity,” he said. “If you want resurgence, get out of the pew, sit down and talk to someone about Jesus.”

The 104th Annual BGCO Meeting will be held Nov. 15-16, 2010 at Oklahoma Baptist University in Shawnee as the university celebrates its Centennial next year.