Message from the past makes an impact today at Yukon, Canadian Valley 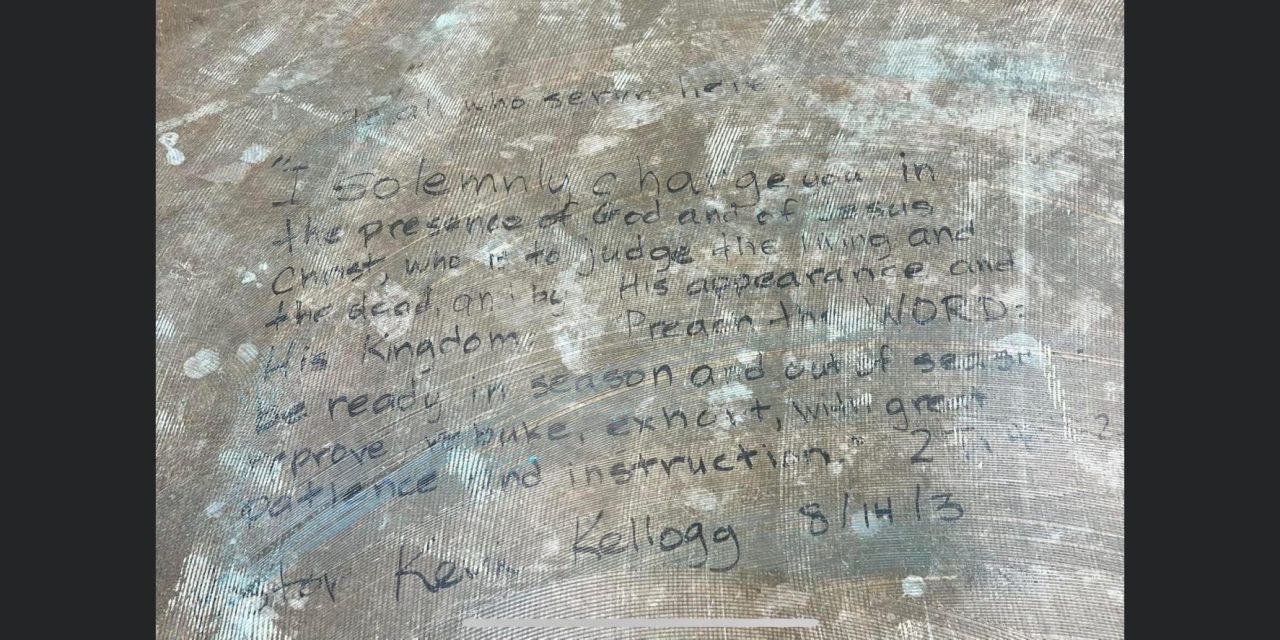 Above: Written 19 years ago, Kevin Kellogg offered a message to the pastor who would eventually follow him at Yukon, Canadian Valley. Jonathan Baker is the current pastor who recently found the message on the floor in his office.

YUKON—Yukon, Canadian Valley was doing some needed renovation to their church, including replacing the carpet in the pastor’s office, when they discovered a message written on the concrete floor. The message was from a previous pastor that was intended for their current pastor.

Kevin Kellogg, who served the church for 15 years (1993-2008), scrawled the message in marker on the concrete floor in 2003, apparently when the pastoral church office was getting carpet installed 19 years ago. Kellogg left a note with a Bible verse and prayer for whatever pastor would one day follow him.

The message, which was discovered by Jonathan Baker, the current pastor at Yukon, Canadian Valley, read: “To all who serve here: I solemnly charge you in the presence of God and of Jesus Christ, who is to judge the living and the dead, and by His appearance and His Kingdom, preach the Word: be ready in season and out of season, reprove, rebuke, exhort, with great patience and instruction. 2 Timothy 4:1-2. Pastor Kevin Kellogg 8/14/3”

“It was inspiring and even more humbling to find out this has been under my feet all this time I have had the privilege of serving at CVBC,” Baker said.

In a Facebook post, Baker talked about how he was affected by the find. “(Kellogg) has since passed away (losing his battle with cancer in 2008). Without knowing me, Kevin prayed for me. He cared enough for the people that he shepherded to pray for another shepherd to come.

“It is an honor to follow in the footsteps of a God-fearing and God-loving man such as Kevin,” Baker said. “Might I leave such a faithful legacy.”