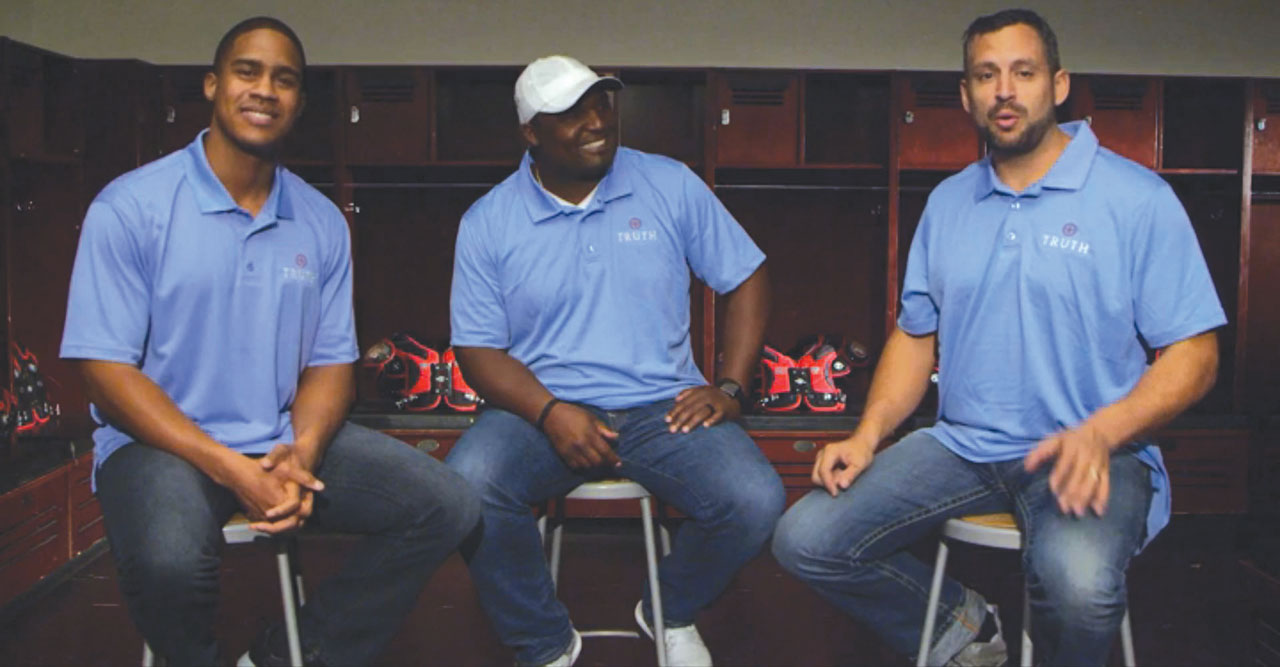 Many across the nation will be watching the Super Bowl on Feb. 7. The men’s ministry of the Baptist General Convention of Oklahoma (BGCO) is offering an alternative at halftime of the big game for church groups to watch.

The Rewired Halftime Show features former college and NFL players Bubba Burcham and Kenyatta and Abraham Wright who will talk about football, faith, family and the Gospel. The 20-minute presentation is free for anyone to download or to request a DVD to be mailed.

“We wanted to create a way for churches to be able to minister to their men in a different way, show them guys who played football at a high level and whose faith and family are important to them,” said Burcham who was a member of the Oklahoma Sooners 2000 National Championship team. “So many men base their happiness on how ‘their team’ does. Sports is such a major emphasis on culture, whether some guy played at the highest level or some guy never strapped on cleats in his life. But sports are important. How can we use sports to engage the lost? How can we use sports to engage men that are on the fringe, get them from the audience to be on the team, to grow them to where they are a participant in their faith, participant in their family and their marriage?”

Burcham also said he enjoyed making the video with the Wright brothers who work with Fellowship of Christian Athletes (FCA). Burcham mentioned he played against Kenyatta in college.

“He was at Oklahoma State, and I was at OU,” said Burcham. “During my sophomore year, he put my quarterback out of the game. I was an offensive linemen, he was a linebacker, and I didn’t like him. But then we worked FCA camp together, and I heard his testimony, and I said, ‘Well, I can’t hate him anymore. I got to like him now.’ Kenyatta has become a good friend and a brother in the faith.”

Abraham has been serving as chaplain of the OU football team. He is a former Miami Dolphin, and Burcham bragged on his speaking ability. “Abraham has a gift about him. He can preach the Word of God,” he said.

Originally, this halftime show was considered to be a way to promote the annual Men’s Rewired conference in April at Falls Creek Baptist Conference Center, near Davis. But Keith Burkhart discovered the video could do much more.

“I am just honored (Burcham and the Wright brothers) see the vision of opportunity to use this video to affect men across our state,” said Burkhart, who is the BGCO’s family and men’s ministry specialist. “It’s my hope this will be an effective tool for our pastors to use, to encourage men in their church, and more importantly, reach men for Jesus.

“The Gospel is clearly communicated. We’re going to touch men on various levels. It’s my hope that pastors will use it to promote Rewired in an effective way. That’s why we initially did it, but then we realized this is bigger than Rewired. It needed to be a tool that we can put in the hands of small group leaders and pastors to reach people for Christ.”

Burkhart said he hopes pastors will use Super Bowl Sunday to promote Rewired from the pulpit because “when a pastor promotes something, people will usually follow,” he said.

Four steps Burkhart encourages churches to do on Super Bowl Sunday are 1) Promote Rewired from the pulpit; 2) Show the one-minute Rewired promo video; 3) Provide a registration table for men to sign up that Sunday; and 4) Mention Rewired in social media, using the hashtag sign #Rewired2016.

Burkhart said the Rewired Halftime Show is not to compete with church services.

“We are not trying to bring the world into the church or try to compete,” he said. “We know we have to meet people where they are. The reality is, people don’t go to church that Sunday night because they are home watching the game. So those churches that do plan something, we want to give them a tool to fill up that halftime space.

“Some churches may want to emphasize this on the small group level, encourage their members to invite people into their homes, have snacks and then play the video. Just think if you invited all your neighbors and friends, this could be a great evangelistic piece.”

The NFL does have guidelines for churches broadcasting the Super Bowl. LifeWay Christian Resource’s website factsandtrends.net featured an article “Is Your Church Super Bowl Party Legal?” Those wanting information on the guidelines can search the website for the article.

To receive a copy of the Rewired Halftime Show, visit MenRewired.com and click the Halftime Show image at the top of the page.